Word of the week: Lawfare

Last week, after the U.S. Court of Appeals for the Ninth Circuit refused to reinstate the Trump Administration’s ban on travel from seven majority-Muslim countries, I began seeing references to a new-to-me legal blog with an interesting name: Lawfare.

LAWFARE: "Remarkably, in the entire opinion, the panel did not bother even to cite this (the) statute." A disgraceful decision!

Clever, I thought: a blend of law and warfare. But how did the Non-Reader-in-Chief happen to hear about it? Not much of a mystery:

I was curious how Trump heard of Lawfare. Well, he saw it on TV, of course. https://t.co/XSSpeAK7yd

I’ll get back to the Lawfare blog – and the post that caused that day’s Trumpertantrum – in a bit. First, though, here’s what I learned after doing a little homework: The word lawfare wasn’t coined by the Lawfare blog. And it’s had an interesting, decades-long history.

In June 2006, George W. Bush was president of the United States, crowdsourcing was new to the lexicon, a lot of people still called blogs “weblogs,” YouTube was barely seven months old, and the iPhone was still a twinkle in Steve Jobs’s eye.

Also, I began writing this blog.

I published my first real post (after a throat-clearing one) on June 8, 2006. It was about a nanoparticle of gold that needed a name. I offered some suggestions. My advice was ignored.

I carried on regardless.

Here are a few of my favorite posts from the archives. As an unctuous waiter would say: Enjoy!

Posted at 05:00 AM in Blogs, Neologisms, Portmanteaus, Word of the Week | Permalink | Comments (0)

The Seattle Seahawks lost the Super Bowl to the New England Patriots. Maybe they’d have fared better under one of the other names nominated in a 1975 naming contest, including the Rainbeams, the Lumberjacks, and the Needlers. (Mental Floss)

“Check the trademark early on,” “Avoid focus groups,” and other good advice about naming from professional name developers. (Communication Arts)

A Krispy Kreme UK store withdrew a Facebook ad promoting “KKK Wednesdays” (Krispy Kreme Klub Wednesdays) “after users pointed out that KKK is also an abbreviation for the Klu Klux Klan.” (The Guardian, via Bonnie Taylor-Blake.)

“People talk about expensive meals using sex metaphors; for noodle joints and cupcake counters, they resort to drug lingo.” A visit to a London pub with linguist Dan Jurafsky, author of The Language of Food. (The New Yorker)

The Daily Brute, The London Asswipe, The Quibbler, and other fictional newspaper names. (Wikipedia)

“Be specific—but not wordy” and other tips for naming a blog. Includes a nice shoutout for Strong Language, where I publish from time to time. (The Daily Post)

Would you spend $30,000 to find “a unique name for your unborn child? A wonderful first name that sounds so good that it just had to be invented? A brand-new name with an exciting derivation and unmistakable history? “ This Swiss firm—whose own name is tough to pronounce—is banking on it. (erfolgswelle® AG)

Last week North Korea’s Workers’ Party released 310 exclamatory new slogans created to mark the country’s 70th anniversary, and Western news media have been having a glorious people’s field day with them. “Even allowing that they probably come off more melodious in their original Korean,” observed NPR, “some of the commandments are so awkward that it's hard to imagine them sounding right in any language.” Some are malodorous (“Let the strong wind of fish farming blow across the country!”), while others are creepy (“Let us turn ours into a country of mushrooms by making mushroom cultivation scientific, intensive and industrialized!”) and still others could have come from an overeager U.S. marketing department (“Go beyond the cutting edge!”). Here’s the complete list on KCNA Watch, an official English-language publication of the Korean Central News Agency.

The Results Are In

Thanks to all who voted in the 2014 Lexiophiles Top 100 Language Lovers contest! I’m pleased to announce that this blog was voted #9 in the Language Professional Blogs category—in excellent company, surrounded by distinguished translation blogs and the very popular Grammar Girl blog.

My Twitter account was also nominated but wasn’t voted into the top 100. I’m pleased to see that several of my Twitter pals did make the cut: Lynneguist (Separated by a Common Language), Stan Carey (Sentence First), Maria Pia Montore (WordLo), and Catherine Cristaki (LinguaGreca).

Check them all out (and the Language Learning and Facebook winners, too, if you fancy those things). And thanks again for helping to make me moderately Internet-famous.

Posted at 06:13 AM in Blogs, Shameless Self-Promotion, Twitter | Permalink | Comments (1)

I’m pleased to announce that, for the fifth consecutive year, this blog has been honored with a nomination in the Lexiophiles Top Language Blogs competition, “Language Professional” division.

Support a professional! Click the badge to cast your vote for Fritinancy!

What’s in it for you? Just the deep (and cheap) satisfaction of supporting a blog and Twitter account dedicated to the profound, puzzling, quirky, mysterious, enlightening world of names, brands, and the language of commerce. Remember: I receive zero compensation for publishing all this content (or “kohn-tent,” as a Russian friend used to say). So your votes are, to me, the equivalent of winning the Powerball or being fully funded on Kickstarter or getting acqui-hired by Yahoo. Or like discovering a treasure chest full of Bitcoin.

Vote once frequently (in each category) and vote soon: the contest ends at midnight June 9, German time.

Like Bartles & Jaymes in the famous ads from the 1980s, I thank you for your support.

Every Breath You Take

Ever get the feeling you’re being stalked? 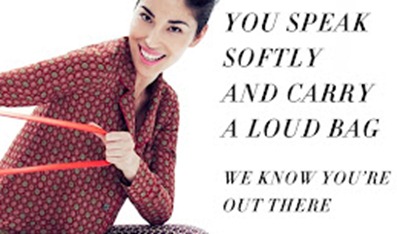 “You Know Who You Are”: tagline of Girls of a Certain Age blog.

“There You Are”: tagline of new Chanel No. 5 ad campaign starring Brad Pitt. (Via Selectism.)

Posted at 08:19 AM in Advertising, Blogs, Perfume, Retail, Slogans and Taglines | Permalink | Comments (0)

The results of the 2012 Top Language Lovers Blog contest are in. Fritinancy placed second in the Language Professionals category and twentieth overall.

Thanks to all of you who voted! I’ll do my best to live up to your high regard.

Breaking news—for the fourth consecutive year, this blog has been honored with a nomination in the Lexiophiles Top Language Professional Blog competition.

I’m hoping for another top-10 appearance, but like Miss Velma Kelly in Chicago, I simply cannot do it alone*. I would be very grateful if you (and your Facebook friends, Twitter followers, colleagues, children, and in-laws) voted for me. Here’s how, in one easy step: Click on the badge and select “Fritinancy” in the alphabetical list.

I cannot tell a lie: The stakes in this contest are low, the financial rewards nonexistent. But my professional honor, and the honor of all name developers, is at stake. Why? Because the list of nominees is packed with translators, whereas Fritinancy represents exactly half of all the naming blogs in the running. (The other nominee is my esteemed colleague The Name Inspector. He’s very good, but my selflessness extends only so far.) Let’s win this one for the namers!

And just look at that handsome set of Lexiophiles badges over in the right rail! Wouldn’t a fourth one create a pleasing symmetry? Of course it would. So vote for Fritinancy!

While you’re on the Lexiophiles site, you may also choose to vote for your favorite Language Learning Blog, Facebook page, and Twitter account. (Yes, once again I neglected to nominate my own Twitter account. Will one of you please take care of that task for me next year?)

You can vote only once in each category, so make it count! Voting closes at midnight (German time) on May 28; results will be published May 31.

I thank you for your support.

* That’s right: I am shamelessly sweetening the deal by throwing in some Zeta-Jones T&A (and gams).