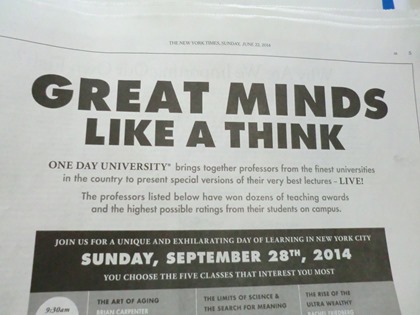 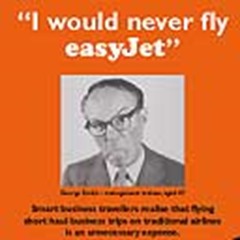 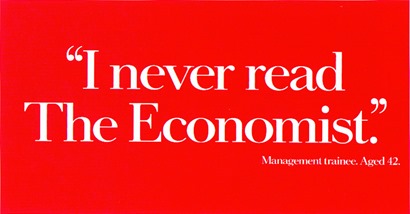 Posted at 06:15 AM in Advertising, Education, Magazines, Slogans and Taglines, Think | Permalink | Comments (1) 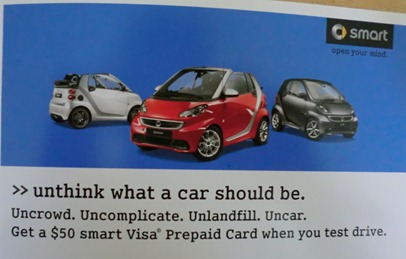 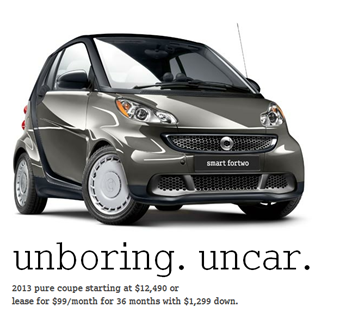 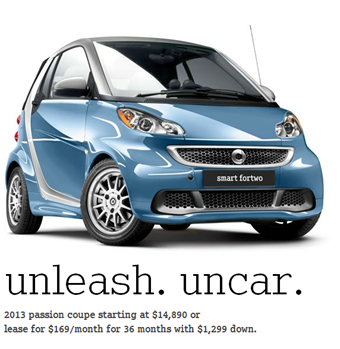 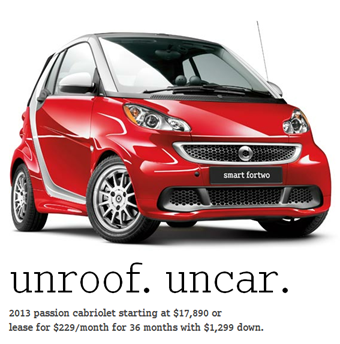 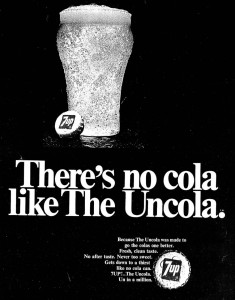 Malcolm Gladwell considers the late Steve Jobs and Steve Jobs, Walter Isaacson’s new biography of the Apple co-founder, in the November 14 issue of the New Yorker:

The famous Apple “Think Different” campaign came from Jobs’s advertising team at TBWA\Chiat\Day. But it was Jobs who agonized over the slogan until it was right:

We&Co. is a new iPhone app that allows customers to rate specific employees within businesses. “Think of it as Yelp with considerably more granularity,” is John Biggs’s summation on TechCrunch.

What interests me about We&Co. is its tagline: “Thank Different.”

“Thank Different” is just one vowel away from Apple’s famous “Think Different” slogan, which was the theme of the ad campaign said to be responsible for Apple’s dramatic turnaround in the late 1990s. The “Think Different” ads, created by Los Angeles agency TBWA\Chiat\Day, featured black-and-white portraits of famous 20th-century people—the Dalai Lama, Jim Henson, Martha Graham, Miles Davis, and many others. The long version of the ad, created for TV spots, called these people “the crazy ones. The misfits. The rebels. The troublemakers. The round pegs in the square holes.” As a slogan, “Think Different” wasn’t terribly different. It riffed on two classics of the genre: Volkswagen’s “Think Small” (1960) and IBM’s “Think” (coined by Thomas J. Watson, Jr., in 1911—several years before he joined the forerunner of IBM).

Read more about these and other “Think” slogans in my May 2010 column for the Visual Thesaurus, “The Thinkers” (access now unrestricted). See also this March 2010 blog post, “Think Twice.”

Posted at 06:30 AM in Advertising, Redundancy, Slogans and Taglines, Think | Permalink | Comments (2) | TrackBack (0) 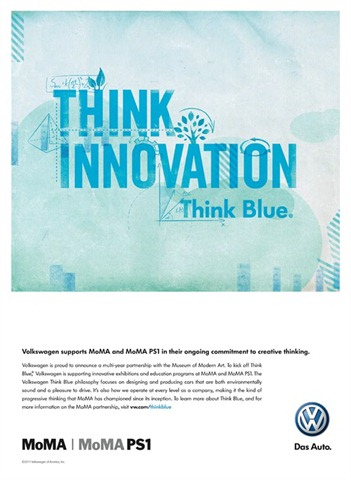 It looks as though “Think” slogans are going to become a monthly feature here at Fritinancy. In March I wrote about the thought-filled campaigns of Saks Fifth Avenue, Bare Escentuals, Think Bank, and IBM; in April I looked at the Qatar Foundation and AT&T.

“Think Indian,” for example, is the theme of an ad campaign launched in early 2009 by the American Indian College Fund. The slogan is supported by multiple definitions. Here’s one: 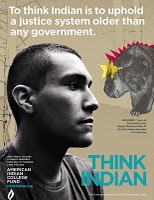 See other ads from the series at the Think Indian blog.

Tetley Tea has a new slogan, “Rethink Tetley Rethink Tea.” (An example of tea-rethinking: “Rethink Brunch! Always serve Tetley Tea!”) Via AdFreak, where the original post by Rebecca Cullers has mysteriously disappeared, although it’s been appropriated by other online publications. (Tsk!)

Think Gum actually makes a cognitive promise: It’s made with “brain-boosting herbal ingredients ... proven to enhance concentration & improve memory*.” The asterisk leads to this disclaimer: “These statements have not been evaluated by the Food and Drug Administration.”

It’s only coincidental that the Think! Shoes site’s background music is the same song I featured a couple of weeks ago. But it’s probably no coincidence that Think! Shoes’ slogan— “Walk Different / Shop Different”—evokes Apple’s “Think Different.” (From the Think! brand-philosophy page: “Here in Sauwald, Upper Austria, we tend to think a little different.”) Great minds —and lesser ones, too — often do think alike. 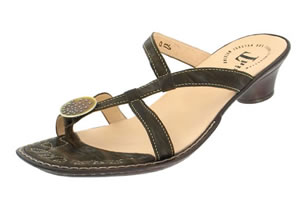 Think! “Soso.” No, really: That’s the name of this sandal.

A couple of Visual Thesaurus commenters mentioned “think” slogans I’d overlooked. In Oh God, Book 2, wrote Don H., God gives a little girl an assignment to promote his presence in the world; she comes up with “Think God.” (Nice.) And Chris S. reminded me that Taco Bell has used “Think outside the bun” as its slogan for quite some time (since 2001, in fact).

By the way, Taco Bell shares a parent company, Yum! Brands Inc., with KFC, which until recently used the slogan “Unthink,” mentioned in a previous post and in my recent Visual Thesaurus column. As of this week, KFC has unthought “Unthink.” AdAge reports that the chain’s new slogan, “the result of the combined efforts of Ogilvy, Sydney; Bartle Bogle Hegarty, London; and DraftFCB, Chicago,” is “So Good.” Not only were three international ad agencies involved in this stunningly mediocre outcome; the wisdom of the crowd was also invoked:

The tagline emerged in focus groups, when lapsed customers tasted the product and said, “It's so good.” But in addition to tapping nostalgia, it also provides an umbrella that works for promoting grilled chicken, crispy fried strips or a value meal.

CONTEST: What will KFC's next slogan be, when they retire “So Good”? 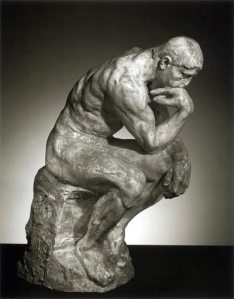 Move over, Saks Fifth Avenue, Bare Escentuals, et al. You're not the only ones with thinking on the brain. 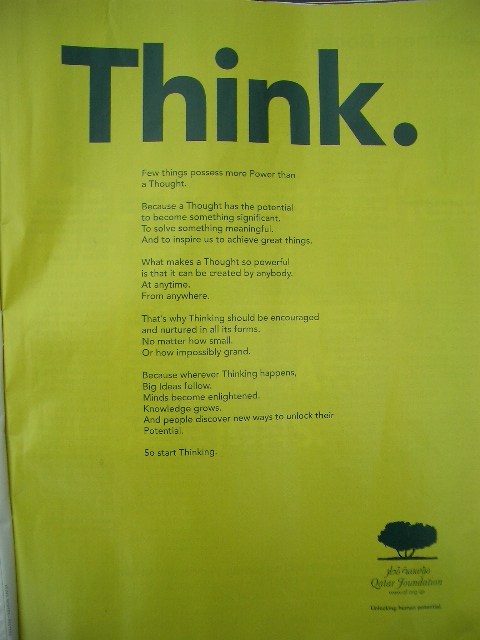 This is a full-page ad from the Qatar Foundation that appeared in the April 12 issue of Time. It did make me think, but mostly about how irritated I am by random capitalization and empty platitudes.

Think isn't good enough for AT&T. Like makeup company Bare Escentuals, it orders us to Rethink.

The new slogan comes with a new Rethink Possible website. Apparently the first thing AT&T has rethought are the rules of English grammar.* (Via Brand New.)

* I'm not an AT&T customer, but my friends who are—especially those who own iPhones that constantly drop calls—say the English translation of "Rethink Possible" is "Sorry, That's Impossible."

Posted at 07:00 AM in Advertising, Redundancy, Slogans and Taglines, Telecom, Think | Permalink | Comments (6) 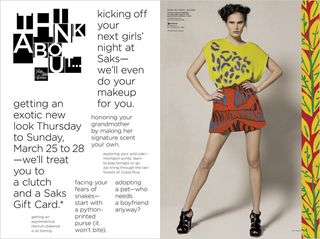 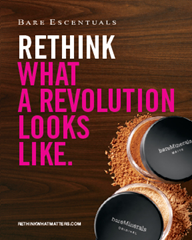 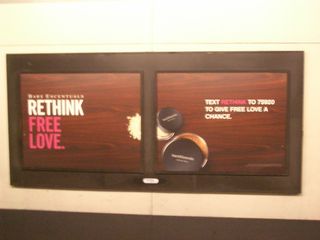 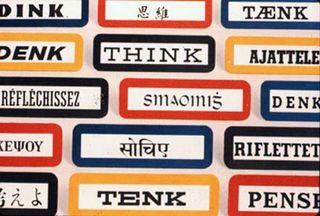 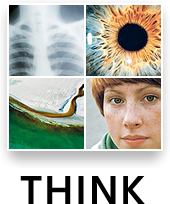 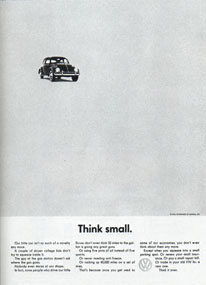