Word of the week: Kayfabe

Kayfabe: /ˈkeɪfeɪb/ In professional wrestling, the portrayal of staged events as “real” or “true.” The term came from the carnival world, where – according to TV Tropes – it is thought to have originated as Pig Latin for be fake. (According to my sources, its original pronunciation would thus have been kee-fabe. No, this doesn't make sense to me, either.) UPDATE: An alternate etymology, also from carnival lingo, is given in the eWrestling wiki: “With money tight, a carny would call home collect and ask for ‘Kay Fabian.’ This was code letting the people at home know they had made it safely to the next town without paying for the cost of a phone call.” (Thanks for that link to reader Dan Freiberg.)

From the TV Tropes entry:

Professional Wrestling adopted the term as a reference to the standard Fourth Wall features of separating the audience from the action. It is meant to convey the idea that, yes, pro wrestling is a genuine sport, and yes, this is how these people act in real life. It is essentially Willing Suspension of Disbelief specifically for pro wrestling.

I’m not a wrestling fan, so my first encounter with kayfabe occurred earlier this year in an unexpected context: the presidential primaries. Specifically, the Donald Trump campaign.

This pissing match between Donald Trump and Fox News over Megyn Kelly just REEKS of kayfabe.

Word of the week: VORP

VORP: An acronym for “value over replacement player.” Coined by baseball statistician Keith Woolner circa 2001 as a way to measure  “how much a hitter contributes offensively or how much a pitcher contributes to his team in comparison to a fictitious ‘replacement player,’ who is an average fielder at his position and a below average hitter” (definition source: Wikipedia).

In the years since Woolner invented VORP, the term has been adopted by tech startups as a means of grading employees, writes Dan Lyons in Disrupted: My Misadventure in the Start-Up Bubble, a memoir published earlier this month. Lyons, who had been laid off at 52 from a reporting job at Newsweek, considered himself lucky to be hired as a “marketing fellow” by a 10-year-old Boston company called HubSpot, which sells “software that lets companies, most of them small businesses like pool installers and flower shops, sell more stuff.” (The company line, writes Lyons: “Our spam is not spam. In fact it is the opposite of spam. It’s antispam. It’s a shield against spam—a spam condom. HubSpot has even created a promotional campaign, with T-shirts that say make love not spam.”) Lyons had spent most of his career writing about technology, and knew nothing about marketing. Still, he needed a job and prided himself on being a quick study. Besides, as he writes in a New York Times op-ed: “I thought working at a start-up would be great. The perks! The cool offices!”

I don’t know what Konsus* means, or how or why its founders chose the name. 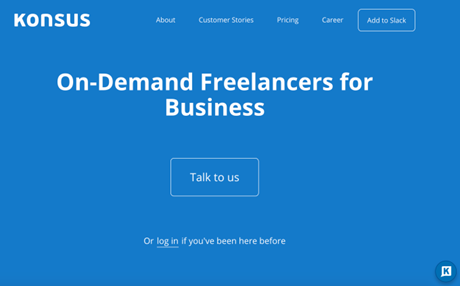 But I can tell you this: If you’re a new company looking to grow by word of mouth, it is not advisable that the word sound like “cons us.”

Related: The stars of HBO’s Silicon Valley try to figure out – from the names alone – what startups like Tubbbr and Kabbage do.

* Maybe it sounds dandy in Norwegian, the first language of the company’s founders. But the company’s now based in Palo Alto, the site’s in English, and they’re going after Y Combinator funding, so I figure they may be receptive to a little constructive U.S. criticism.

Read all about ’em: names, slogans, and acronyms in the news (and the funny papers):

The headline is inaccurate and inadequate— “words” don’t “become startups”—and I take issue with the snarky attitude, but this list of short “real” (dictionary) words used as names of startups is worth a look. And the way they’re organized is downright poetic. (Hat tip: Karen Wise.)

Speaking of poetic, the New Yorker’s Rebecca Mead considered the favorite words of some writers (mostly British and Irish)—Hilary Mantel loves nesh, Taiye Selasi celebrates the Ghanaian colloquialism chale—and added a favorite of her own.

Why are so many Indian businesses named “Hitler”? (Hat tip: MJF)

Memo to Designbook, Teachbook, and other bookish types: Facebook’s lawyers would like to have a word with you.

Pwn, lotsa, cakehole, and obvs are all playable Scrabble words now—outside North America, anyway. (The new list comes from Collins Dictionary, which isn’t an official reference in the US.) Here’s NPR on the announcement (and readers, predictably predicting “the death of English”). And here are two views from Lingua Franca, the language blog of the Chronicle of Higher Education: Anne Curzan on how the additions are “in the spirit of the game,” and Geoffrey Pullum with some extremely nerdy math that proves that adding new words won’t make the game easier to play.

How Venmo, Zillow, Foursquare, and other technology brands got their names.

Dasani, IKEA, and other brand names that became baby names.

“A good name...tells a story, whether or not that’s apparent to anyone but the founder.” An unusually good article about name development from Crain’s New York Business (with a misleading title).

I don't know if you get to call your company Just Wireless if you are literally selling wires. pic.twitter.com/Kfv7LC6Owb

Posted at 06:43 AM in Baby Names, Design, Facebook, How They Got That Name, Linkfest, Naming, Restaurants, Startups, Story, Trademark, Trends, Words | Permalink | Comments (0)

Two years ago, the American Dialect Society selected hashtag as its word of the year for 2012. Last week, for its 2014 word of the year, the ADS chose an actual hashtag, #blacklivesmatter, the slogan that—as the press release put it—“took on special significance in 2014 after the deaths of Michael Brown in Ferguson, Mo. and Eric Garner in Staten Island, N.Y., and the failure of grand juries to indict police officers in both cases.” It was the first time in the contest’s 25 that a hashtag had been selected for the distinction. The vote at the Hilton in Portland, Oregon, was nearly unanimous, but the response has been anything but. (“It’s not a word” and “It’s too political” were two of the negative reactions.) Read Ben Zimmer, chair of the ADS New Words Committee, on the WOTY selection (and on other words discussed at the meeting). For supporting viewpoints, see Anne Curzan’s post on the Lingua Franca blog (“The linguistic work of hashtags is especially interesting”) and linguist/librarian Lauren B. Collister’s post on her own blog (“a pretty historic moment for the field of linguistics for a number of reasons”). For a dissenting view, see Schnaufblog: “Call me old school -- I like the idea of a word as a combination of form (sound, gesture, writing) and meaning (lexical or grammatical) that can combine with other words according to the rules of grammar to form a clause.”

“All of These Nameifications, or Whatever”

From “Let’s, Like, Demolish Laundry,” Jessica Pressler’s long and enlightening story about tech startups in the “laundry space,” published online May 21 in New York magazine:

Thus, in the winter of 2012, two rival laundry sites in the mold of [restaurant delivery service] Seamless launched simultaneously in New York. One was Brinkmat, founded by two Goldman Sachs software engineers. (“Like, ‘brink’ like ‘on the brink,’ ” explains founder Tim O’Malley, “and ‘mat’ like laundromat.” Awkward pause. “Names are hard,” his partner adds.)

Names are hard—who knew? But not sufficiently hard, it seems, to merit paying an experienced professional for assistance.

American cities in the second decade of the 21st century are awash (Pressler’s apt word) in new-model outsourced laundry services summoned by smartphone app.* Other laundry startups mentioned in the article include SpotlessCity (the second of the two rival sites that launched in New York in 2012), Washio, FlyCleaners, Cleanly (yep, another -ly name!), Sudzee, Drop Locker, Laundry Locker (the two Lockers are unrelated), Prim, Bizzie Box, Sfwash, Wash Then Fold, Rinse, and Your Hero Delivery (yep, another hero!).

Washio, the focus of the story, is based in Santa Monica. Its laundry shleppers are called “ninjas”:

They chose the name ninjas in part to signify the company’s relationship to Silicon Valley, where the title is handed out freely. “It stems from Disney, which called everyone a cast member,” explains [CEO and co-founder Jordan] Metzner, in his stonery-didactic way. “All of these ­nameifications, or whatever, is basically to get everyone to think they’re not doing what they are actually doing, right? No one wants to be the trash guy at Disneyland. ‘No, I’m a cast member.’ At Trader Joe’s, they’re all associates. What does that mean? It means nothing, but I would rather be an associate than a cashier. It helps people elevate themselves and think they are doing something for a greater good.”

Read the rest of the story, which offers a deliciously jaundiced take on contemporary startup culture. Pressler doesn’t hold back:

Looking around at the newly minted billionaires behind the enjoyable but wholly unnecessary Facebook and WhatsApp, Uber and Nest, the brightest minds of a generation, the high test-scorers and mathematically inclined, have taken the knowledge acquired at our most august institutions and applied themselves to solving increasingly minor First World problems. The marketplace of ideas has become one long late-night infomercial.

* I confess I’m mystified by the obsession with laundry as a problem to be solved. Of all the necessary household chores, I find laundry to be the most satisfying—the newer machines are wonderfully efficient, and you end up with a clean, fragrant product! I enjoy ironing, too, but in this as in so many other areas I am evidently an outlier.