Seth Godin commends the clarity of this Dunkin' Donuts sign--he calls it "the missing manual." I like it, too. I just wish Dunkin' Donuts had paid a proofreader to check the spelling of point #2. 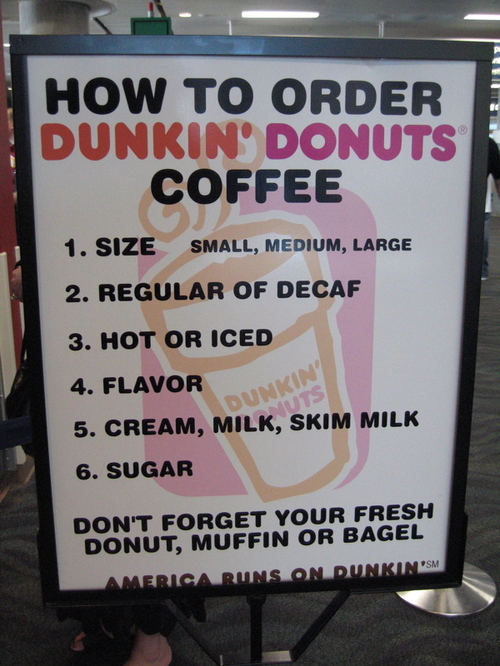 New Hope for the Mad as Hell

Do you find yourself shouting back to the radio when speakers say "less" when every educated and reasonable citizen knows full well that the right word is "fewer?" Does it drive you to distraction when an older adult tries to use teenage slang? Are you sick and tired of misuses of passives? If these and other language issues make you furious, you may need some help with your anger.

And help is on the way: Language Log announces its new 12-step program in Language Anger Management. Attendance is limited; reserve your space now!

And As Long As I'm Picking on the Times...

Too much eggnog on the Sunday Styles copy desk? Deborah Schoeneman's piece on the new Googleplex in Manhattan contained at least two errors unworthy of the newspaper of record:

The power geniuses are more straight-laced than some of their predecessors in Silicon Alley.

The majority of New York Googlers joined the company after its initial public offering, and it was the success of that launch, along with the meteoric rise of the stock (still high, although the price on Friday was around $50 below its high point of $513 in November) that allowed a hiring boom, which lead to the move into new offices.

It's straitlaced, from "strait," a tight or narrow channel, and "laced," as in corset lacing. Someone who laced her corsets tightly was assumed to be exaggeratedly proper or priggish.

Sunday's print edition of the New York Times carried this headline on page 2 of Week in Review:

Awaiting Handshakes Worth a $100 Billion

Read it aloud. Now read it the way it appears in the online edition, where some sharp-eyed copy editor evidently made a fix:

The Times is hardly the sole perpetrator of this particular malfeasance, just the most prominent one I've caught to date. The erroneous construction shows up chronically in blogs, press releases, and corporate web sites. You see it only when the monetary figure starts with the numeral 1; people know better than to write "worth a $250 billion." (However, I have seen "worth a $100 thousand." That figure should be expressed "$100,000," sans "a.")

And, yes, the rule holds with euros, pounds sterling, yen, and every other unit of currency.

Sloppy, sloppy, sloppy. Sarah Jessica Parker's much-hyped fragrance may be "Lovely," but there sure are a lot of ugly typos in the ads and web site. On the SJP home page, a key brand word is misspelled "lovliness." In her online "journal," SJP muses about her "life long dream." And in print ads running in October beauty and fashion magazines, Lovely Liquid Perfume Serum is called "a perfect scent accessory to backless, strapless and skin bearing fashions." How much of a load is the skin supposed to be bearing, and couldn't it use some help from a hyphen? (A serial comma would help, too.)

A person who cares about language could easily be driven to tears, or strong drink, by the unproofread state of copy everywhere. The Mirror Mirror Imagination Group, a beauty branding agency, seems to have forgotten how to spell "and," the only explanation I can find for the rampant ampersands. And any client who signs up for Mirror Mirror's "copywritting" services gets what he or she deserves.

Misspellings are one thing (the ubiquitous "loose" for "lose" is one that sets my teeth on edge); eggcorns--usually described as mis-hearings--are another. Recently I've come across "tithe you over" instead of "tide you over" and "exuberant prices" instead of "exorbitant prices." (Do we have Alan Greenspan to blame for the latter?)

Brother Michael forwards this document from the California Public Utilities Commission in which he found, on the bottom of page 10, "Fourth, we tentatively flush out details..." I hear "flush out" (which means to drive something out into the open, as a hunting dog flushes out a covey of quail, or a plumber flushes out the pipes) instead of "flesh out" (to give substance to an idea, as flesh is added to a skeleton) at least once a week. It's common enough to be cited in Paul Brians's indispensable Common Errors in English, a copy of which I'd like to send to all of the offenders I've mentioned here.

Thanks to Astera for the SJP ad copy.

Diego Rodriguez at Metacool tells of visiting the Federal Aviation Administration web site to see the latest carry-on guidelines and discovering this:

"Frequestly"? "Find our what you can bring"? As Diego says, "Typos like these aren't helping the FAA brand."

That's putting it mildly. If the FAA can't be troubled to employ a proofreader, what does it say about the agency's attention to other details--for example, explosives that aren't conveniently hidden in shoes or poured into shampoo bottles?

Correct spelling isn't a little thing. It's one of the elements that create a lasting, positive impression of you and your brand. Here's Diego again:

We want the FAA to show us at every opportunity that they have their act together. Brands are fractal entities, and the meaning of the whole is to found in the execution of even the lowliest detail.  Especially if your brand is all about rigor, safety, and juggling lots of big, heavy balls without dropping even one in a million.

(By the way, Diego's post went up on October 3. As of today, October 6, the errors were still on the FAA site.)

My old copy chief, Scotty the Scathing, would have been merciless with the writer of this MSNBC headline:

Wal-Mart to Taylor Stores to Customers

Virginia Postrel at Dynamist thought it was a jokey little scoop about a partnership with the Ann Taylor store chain. So did I. Nope, just a bad case of homonymitis. The headline's been fixed; you can see the embarrassing original here.

Geek Squad has a great brand story: the black-and-white Geek Mobiles, the orange-and-black police-barricade identity, the "agents" in retro short-sleeve dress shirts. Word is, they even do a pretty good job of fixing "any PC problem anytime, anywhere" and saving "victims of rogue technology."

The rules of English spelling, however, must not be in the Geek Squad manual.

Case in point: a full-page ad in the August issue of Wired (page 020 of the "How To" insert). The headline reads: "Your Right to Computer Support Supercedes Our Right to a Social Life."

Cute. But wrong. It's supersedes, not "supercedes."

"Supersede" is an odd word with an orphan spelling--an exception to the -cede rule that used to be universally taught in, oh, eighth-grade English. Perhaps the Geek Squad guys were playing D&D instead of paying attention to the teacher, so here's the makeup class:

Unlike "recede," "intercede," and "precede"--in which -cede comes from the Latin word meaning "to go"--"supersede" (meaning "to replace") incorporates the Latin root "sedere," which means "to sit." To supersede originally meant "to sit higher than"--as in a sedan chair (same root), a conveyance in which a rich person could sit while being transported by lackeys.

This isn't a six-of-one-half-a-dozen-of-the-other matter, or an arguable point such as till and until. "Supercedes" is just wrong. Teeth-gnashingly wrong when displayed in 30-point type.

What have we learned? If you're doubtful about how to spell it, look it up. Yes, in a dictionary. Don't trust your spell-checker, which has the vocabulary of a six-year-old. (TypePad's spell-checker usually isn't even that smart--although it did flag "supercedes.") And, as Patricia T. O'Connor relates in Words Fail Me, your speller won't stop you from making miss steaks if their spelled wright.

And while we're at it, Geeks, why so stingy with the hyphens? You need at least one in your tagline, "24 Hour Computer Support Task Force" (between "24" and "Hour," to create a compound adjective; I'll let you slide on "Computer Support," which is also an adjective here).

Believe it or not, I'm not nearly as cranky as Lynn Truss on this subject; if people don't care about spelling and punctuation in their personal correspondence, that's OK with me. But in a full-page national ad, presumably created by a high-priced ad agency and vetted by $400-an-hour attorneys? Sorry, fellas: I'm going to have to issue a citation. Next time, hire a proofreader (see below).

There's a beautifully written essay by Melissa Holbrook Pierson in today's Salon about the pains and occasional pleasures of being a proofreader, the indispensable person who's paid (very poorly) to clean up writers' messes--or as Pierson puts it, "the literary equivalent of wiping the tables at Burger King." Like many in the word trade, I began my career on the proofreading desk, and I know firsthand the indomitable solidarity of the unsung and underpaid. I also know the deep satisfaction of setting a phrase aright and creating a tiny, artificial world of perfect spelling and punctuation.

Here's a snippet, but do read the whole piece. It's a gem.

...I love catching those little inconsistencies, love putting the point of my freshly sharpened red pencil on top of a comma that needs to be a semicolon, and inscribing the delete symbol, like the letter "S" with a flourish, that will herald the disappearance of anything it touches. This I do with care and precision, two qualities I rarely exemplify in any other part of my life, and here is where proofreading allows me to better myself. I become someone who gets things done. Someone with good handwriting. Someone who pays attention, with great focus, and lets nothing get by her.