It seems like only yesterday – it was, in fact, just over two months ago – that linguists and political pundits were parsing schlonged, a derivative of a Yiddish vulgarism for “penis” that had been emitted by presidential front-runner Donald J. Trump in his disparagement of Democratic candidate Hillary Clinton (“she got schlonged”).

It turns out that was just a warmup for the current penis-palooza we’re now seeing in commercial and political language. And it’s not just any old male genitalia that are commanding center stage: it’s undersized ones.

Word of the Week: Wazzock

Wazzock: A stupid or annoying person; an idiot. British slang; OED’s earliest citation is dated 1976 (“Stood there like a wazzock on the pavement”). Origin officially unknown (but keep reading).

I’m familiar with many British insults—wanker, tosser, berk, chav, etc.—but wazzock was new to me until last Friday. That’s when I encountered it in a New Yorker blog post about Republican presidential candidate Mitt Romney’s gaffe-fest in London. The headline on the post: “The Problem with ‘Mitt the Twit’: He’s a Wazzock.” 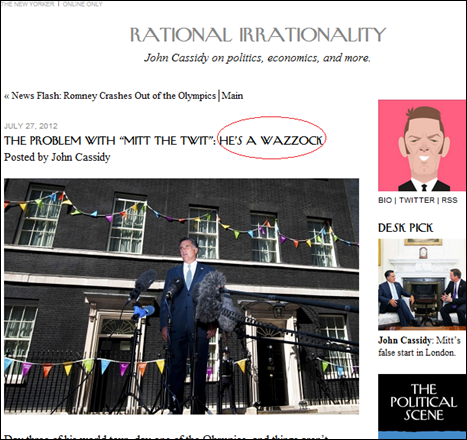 A recap: Romney arrived in England on Thursday, one day before the opening ceremony of the 30th Olympiad, and proceeded to shoot himself repeatedly in the foot. He told a US reporter that “there are a few things that are disconcerting” about London’s Olympic preparations; referred to the “backside” of 10 Downing Street; addressed Labour party leader Ed Miliband as “Mr. Leader” (this US convention is not OK in the UK; some Brits thought Romney had simply forgotten Miliband’s name); and bragged about his “Anglo-Saxon heritage.” (A roundup of Romney’s blunders here.)

“Mitt Romney is perhaps the only politician who could start a trip that was supposed to be a charm offensive by being utterly devoid of charm and mildly offensive,” wrote the Telegraph’s Alex Spillius. His colleague at the Telegraph, Lucy Jones, was the first to label Romney a wazzock. (“Who does Mitt Romney think he is?” Jones fumed.) When I checked Google on Monday morning, there were 114,000 results for “Romney wazzock.”

So what does wazzock mean? The New Yorker’s Cassidy, who grew up in Yorkshire, attempted an explanation:

According to some accounts, a wazzock, in the original usage, was a bull’s penis. When I was young, it was used to describe a hapless idiot who blunders around doing and saying things he or she shouldn’t. Wazzocks don’t necessarily have bad intentions, but they tend to bring trouble to themselves and others. Romney, for all his business success and Harvard degrees, sometimes seems to fit the description.

I’ve also come across some speculation that wazzock is derived from wiseacre (“know-it-all”), which came into English in the 1590s from Dutch wijssegger ("soothsayer").

There is no evidence whatsoever that wazzock is related to the Budweiser “Wassup?” commercials (or the parodies).

At least one other potential Word of the Year candidate surfaced in the coverage of Romney’s undiplomatic visit: Romneyshambles. It’s a pun on omnishambles, which was coined by the British writer/director Armando Iannucci, who specializes in political satire. (His first American TV show is Veep, starring Julia Louis-Dreyfus.) In a 2009 episode of Iannucci’s BBC series The Thick of It, the hilariously vitriolic and profane communications director, Malcolm Tucker (played by Peter Capaldi), tells another character that she’s “a fucking omnishambles.” (Watch the scene here.)

an omnishambles because of several serious policy and public-relations blunders, including some unexpected consequences of the Chancellor’s budget of the previous month. The Daily Mail commented that omnishambles “described the combination of tragedy and farce that characterises modern politics” and the word has been gleefully taken up by many commentators, some even in the Conservative press.

Unlike Barack Obama’s name, which produced dozens of riffs during the 2008 campaign and beyond—Obamamentum, Obamanomenon, Obamania, Barack the Vote, and so on— “Mitt Romney” has given punsters little to work with besides the “Mittens” nickname. “Romneyshambles”—a perfect pun on a splendid made-up word—may be the first name-game breakthrough of the 2012 campaign.*

Bonus link: A serious take on Romneyshambles from Paul Krugman.

* I refuse to count Santorum.

Word of the Week: Pizzled

Pizzled: A combination of "puzzled" and "pissed off." Coined by psychiatrist Edward Hallowell in his book CrazyBusy: Overstretched, Overbooked, and About to Snap! Strategies for Coping in a World Gone ADD (whew!) to describe how you feel "when you're eating with somebody and their phone rings and they answer it." Evidently he hadn't researched the traditional meaning of "pizzle," which has been around since 1523.