Thanks to everyone who voted for Fritinancy in this year’s Bab.la/Lexiophiles Language Lovers contest! I’m pleased to report that this blog placed ninth out of the 100 blogs in the Language Professional Blog category. 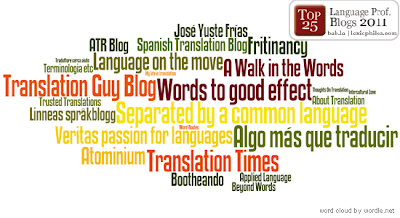 Of the top 25 blogs, 19 are about translation or interpretation. Fritinancy is the only blog about names and brands to have made the cut!

Also on the list: Word Routes (linguist Ben Zimmer’s Visual Thesaurus blog), Separated by a Common Language (linguist Lynne Murphy’s blog about British and American English), and A Walk in the WoRds (“a place to share linguistic rants and raves”). All three of those blogs are in my blogroll and are well worth your attention.

In addition to the #9 ranking in the Language Professional Blog category, Fritinancy placed 60th in all combined categories.

Thanks for voting, and for reading.

In the News, Out of the News

I'm delighted to share some very good news about my old friend and former colleague David Darlington, who last week won a National Magazine Award for "Broken," his disturbing, carefully researched, well-written story about bike-car crashes for Bicycling magazine. (Read the story.) The story won in the Public Interest category, which "recognizes journalism that sheds new light on an issue of public importance and has the potential to affect national or local debate or policy." And it beat a field of stories from larger, better-known publications: Business Week, Vanity Fair, Newsweek, and Mother Jones.

I met David when we were both starting out in journalism; I had the pleasure of editing one of his first magazine stories, about the world wrist-wrestling championships in Petaluma. He went on to do a lot of excellent magazine work and to write books about Zinfandel, the Mojave, the California condor, and Area 51. David is a skillful craftsman and a scrupulous researcher in the John McPhee mold; he once told me, possibly quoting someone else: "Research is endlessly beguiling, but writing is hard work." I'm thrilled for his success, and hope some of the big magazines he beat start begging him to write for them.

On the negative side of the ledger, the newspaper world is greatly diminished by the departure of John McIntyre, who last week received, as he put it, "an early parole" from the Baltimore Sun, where he'd worked for 23 years, most recently as director of the paper's copy desk. I came to know Mr. McIntyre through his wonderful blog, You Don't Say, and, more recently, through Twitter. I started my own career as a newspaper copyeditor; my relatively brief experience instilled deep respect for the gatekeepers who maintain their vigilance over every edition of the paper, day after day. I'm pained by what's happening to newspapers all over the country, and I'm horrified by the losses on copy desks—losses that are evident every day in misspelled headlines, confusing syntax, and erroneous captions. Experienced copyeditors catch those mistakes; more important, they care about them.

I don't know who's going to care about standards at the Sun now, but I take some comfort in the fact that John McIntyre has re-established his blog, where he promises to offer "observations on language and the craft of editing, with additional reflections on subjects of no necessary connection with the former topics." I enjoyed this postscript: "As the observant may have noticed in this paragraph, now that I am free of the shackles of Associated Press style, I am reverting to the Oxford comma."

P.S. Read more about the Sun layoffs, including a scathing comment by David Simon, a Sun alumnus and the creator of The Wire, whose final season was set at a newspaper not unlike the Sun. Simon wrote:

It’s almost unfathomable. The Baltimore newspaper’s only plan is slow suicide, with Chicago leeching the last nickels and dimes even to the moment when they shutter the doors. Never has an industry so willingly butchered itself or shown its own product such contempt.

Something called The Ten Best has included this blog on a list of "wickedly cool blog names." It's in the number-two spot (which is actually #9 in the countdown), right after The Big Bad Blog of the Glorious Notorious Jackonious.

I'm flattered--sort of. If only The Ten Best had spelled my blog name correctly.

Here's the link to my post about the meaning of Fritinancy.

Congratulations to linguist Erin O'Connor: her Snowclones database has been named #6 on Fimoculous's¹ list of the 30 best blogs of 2006 that you (maybe) aren't reading. In this case, you doesn't include moi: I've been a fan since Day One. Well done, Erin!

What's a snowclone? Briefly, it's a fill-in-the-blank cliché. One of the best-known snowclones is "X is the new Y." (Seen in the New York Times Thursday Styles section today: "Blue is the new green," a quote from ad agency JWT.) Once you read Erin's blog, you'll start seeing a blizzard of snowclones.

Oh, and needless to say (but I'll say it anyway), I'm thrilled to receive an honorable mention in the category along with the estimable LanguageHat.

Now I'm going to work my way through the rest of the list, which includes a whole lot of blogs I'd never heard of, as well as one--The "Blog" of "Unneccessary" Quotation Marks--that I recommended a few months ago.

¹Now you want to know what "Fimoculous" means. Blog author Rex Sorgatz writes: "A fimoculous is a micro-organism that consumes its own waste for sustenance. Fimoculli are therefore a self-perpetuating ecology. A mono-parasite, a homo-symbiosis, Fimoculous.com devours the filth expunged on the mediascape."

Well, that's close, but not quite right. Fimoculous is an adjective, not a noun; it means "inhabiting or growing on dung"--fimus being one of several Latin words for dung. Which suggests a snowclone: "If the Romans had N words for dung, surely X have Y words for Z.")

Big attaboy to my pal, fellow namer, and frequent commenter here Mark Gunnion, who landed on Page A2 of yesterday's San Francisco Chronicle ("What's in a Name? Just Ask the Namer," by C.W. Nevius).

It is hard to say what is more surprising: that there are people whose job it is to come up with names for computer systems, athletic shoes and startup companies; or that they can make a living at it.

Gunnion does both. Working out of his basement in his home on San Francisco's Potrero Hill, he has spent 11 years as a "full-time, freelance namer,'' a rare breed of wordsmith who lives to find the perfect name.

"Ideally,'' says Gunnion, "you are looking for that 'Google zero' word, a word that only means your company.''

As I frequently remind readers (and clients), naming things only seems easy. (I love the quote in the story from another colleague of mine, Nan Budinger: "Everybody says, 'I named my pet and I named my child. How hard could it be?' '') Mark compares the work to shoveling coal.

"I'm the John Henry of namers,'' Gunnion says. "There's nothing automated -- just a pen and paper.''

And a thesaurus, Swahili and Esperanto and Romanian dictionaries, a Scrabble set, a near-infinite trove of sci-fi lore, and an amazingly associative imagination.

Here's a Mark story. Several years back, I asked Mark to lend his giant brain to a super-rush naming job I'd landed. Our team generated about a thousand names for that project, and the client ended up choosing one of Mark's spot-on contributions, Quiver. The company has since gone to the ash-heap of dot-com history, but the memory lingers on, as does my gratitude to Mark.

May he never lay that hammer down.

P.S. And speaking of John Henry, the site I link to here has one of the best punch lines in the virtual universe:

This site is best viewed while eating marshmallows around a campfire under a starry sky.

No, I haven't changed my spots. But I'm very flattered that Away With Words is today's featured blog on Designers Who Blog, an excellent showcase for design, branding, and now writing. Designer-author Catherine Morley, who's based in Bangkok, made a new year's resolution to learn more about writing, and to that end has compiled some valuable links, including many of my own favorites. The niftiest thing about the list (aside from its sheer comprehensiveness): when you mouse over a link, the site's home page pops up.

Hmm. Maybe my new year's resolution should be "learn to design."

Finally: An Award That Really Speaks to Me

I've been called a slob more than once. But today I can proudly call myself a SLOB: a Startlingly Loquacious and Outstanding Blogger.

That's right: I've been inducted into the SLOB Hall of Fame, the inspired creation of John Koetsier at Bizhack ("Hacking the Tech of Biz and the Biz of Tech"). Each week John selects nine blogs that "provide informed, accurate, and opinionated commentary on issues we care about." This week Away with Words is one of the nine.

My SLOB-mates include the excellent TED Blog, the brilliant Carpe Factum (don't miss the hilarious ransom rant against "motivational" crapola), and a--hallelujah!--well-written blog about tech stuff, Chip's Quips. Last week's honorees included Guy Kawasaki, Seth Godin, and one of my personal favorites, Mike Wagner at Own Your Brand.

Must rush off now to prepare for the press conference, the motorcade, and the official coronation. But don't fret--I won't forget my humble beginnings and my deep debt of gratitude to all of you (hello? hello?) who give me the strength to carry on. You may stop applauding and sit down now. Go forth and do something SLOB-bish.