Remember Michael Chertoff, who as homeland security secretary during the Bush Administration said ill-advised things about illegal immigrants (and who, predictably, was later found to employ them)? Since leaving government service, he's kept busy running the Chertoff Group, a security consulting firm; since the Dec. 25 Underpants Bomber episode he's given "dozens of media interviews," according to the Washington Post, about the urgent need for more full-body scanners at airports.

Wouldn't you know, one of Chertoff Group's clients just happens to be a big manufacturer of full-body scanners, Rapiscan Systems. Which would be unfortunate even if it weren't an apparent conflict of interest. Here's how Whatever It Is I'm Against It makes the case:

I assume the first syllable of Rapiscan is pronounced with a soft a1 as in rapid, not a hard a2 as in rape. If I were planning to sell scanners that pictured people naked, I'd have put some more thought into that name.

Rapiscan is yet another of those unfortunate ambiguous portmanteau names that are so easy to dream up and so difficult to pull off. In honor of Lewis Carroll, the first person to use portmanteau to describe such mashups3, here's a cautionary verse:

Beware the awkward portmanteau!
The syllables that clash and grate!
Avoid the sound inapropos
And the sense third-rate.

3 Carroll was also the coiner of "snark."

Words of the Year 2009: Fritinancy Edition

Technology, politics, and the economy dominate my list this year. Oh, and the undead.

As with my Words of the Decade list, I followed the American Dialect Society's criteria for selection, in this case:

Word of the Week: Botax

Botax: Nickname for a proposed tax on elective cosmetic-surgery procedures that's part of the Senate healthcare-reform bill. It's a pun on Botox®, the nonsurgical injection that smooths frown lines by temporarily paralyzing the muscles that cause them. Botox was coined from botulism toxin, from which the substance is purified.

"Botax" first surfaced as a perjorative term in the summer of 2009, especially on Fox News, whose commentators have been generally opposed to all Democratic-sponsored reform measures. The word appeared more frequently in mid-November, as the Senate prepared to debate the issue. From a Nov. 19 Associated Press report:

The White House and Senate Democrats have turned to a proposal to tax breast implants, tummy tucks, wrinkle-smoothing injections and other procedures as they search for ways to pay for costly health care overhaul plans.

Vanity was an easy target as lawmakers scraped for cash for the nearly $1 trillion plan to expand health care to millions of Americans who lack insurance. But it's no joke to the drug makers and people who perform the cosmetic nips and tucks. And they're fighting back.

Skin-smoothing Botox injections could be hard-hit. There were some 4.7 million last year and an average cost per visit of about $400, some including several injections.

"It is a random hit on an easy target that is only punitive and not corrective," said Caroline Van Hove, a spokeswoman for Allergan Inc., the maker of Botox Cosmetic. "The bottom line is that taxing cosmetic procedures is unnecessarily punitive on people who have merely decided to enhance their appearance." ...

The plastic surgeons may have seemed like an appealing bunch to pick on given that they had already been skeptical of the Democrats' overhaul proposal. But they say it will be a blow to countless American women — of every income level.

"The common misconception is that this is going to tax wealthy, suburban Republican women," said Dr. Phil Haeck of Seattle, Wash., the president-elect of the American Society of Plastic Surgeons. In fact, he said, of the 86 percent of cosmetic surgery patients who are female, 60 percent of them have incomes between $30,000 and $90,000.

In addition, he said the tax would be especially hurtful in tough economic times that have prompted many newly jobless women to look for ways to make themselves more marketable to prospective employers. He said, "They're competing with people 10 to 15 years younger than them and they want to look better."

The Trouble with "Reform"

Are you telling me that with all the money pumped into consultants and pollsters, in a country whose media culture is built on advertising and catchphrases, that with all of ambitious little beavering minds who have studied the art and science of persuasion (and know Lakoff "framing" backwards and forwards, chapter and verse), that with all of that the architects and backers couldn't come up with something more inspiring and memorable than "health care reform"? Where's the creativity, the missionary zeal, the visionary spark? First of all, "reform" is one of the most boring fucking well-meaning meaningless words in the language. It's a word that carries no juice, no buzz, no friction, no color, no nothing.

Why is it that Republican consultants can coin something as cunningly diabolical as "death tax" (as a substitute for inheritance taxes) and sell the hell out of it, or contrive the "Contract with America," yet health reform is packaged in a plain brown wrapper with all the pizazz of a corporate restructuring plan. It should have been called something upbeat and flagwavey like "The American Health Freedom Act," guaranteeing health coverage and available, affordable insurance for all.

Posted at 08:06 AM in Government, Insurance, Politics, Slogans and Taglines, Wish I'd Written That | Permalink | Comments (1) | TrackBack (0)

The National Endowment for the Arts has a new director, New York theater producer Rocco Landesman, who received Senate confirmation last week. Landesman has already indicated that his tenure will be different in at least one way from that of his predecessor, poet Dana Gioia. From an interview with Landesman published last Saturday in the New York Times:

The new chairman said he already has a new slogan for his agency: “Art Works.” It’s “something muscular that says, ‘We matter.’ ” The words are meant to highlight both art’s role as an economic driver and the fact that people who work in the arts are themselves a critical part of the economy. ...

As for the former agency slogan, “A Great Nation Deserves Great Art,” he said, “We might as well just apologize right off the bat.”

The old slogan had long been unpopular with some prominent critics. Here's what the Los Angeles Times arts blog, Culture Monster, said about it in May:

"Ms. Cosmopolite," the blog written by the executive director of L.A.'s Craft and Folk Art Museum (CAFAM), had this to say in March, in a post titled "If I Ran the NEA":

First, I would do away with the current NEA slogan, “Because a great nation deserves great art.” This line gives me the hives from start to finish and raises many questions. Does a great nation come before great art or the other way around? Based on what criteria does one define greatness? I also don’t get the deserve part. Is there a nation on the planet that doesn’t merit culture? In my mind, the creation of art does not occur in a parallel universe, but is a naturally occurring byproduct of society. Instead of this rather empty line, I would borrow the slogan of a colleague of mine from the Festival of Philippine Arts & Culture that captures my sentiment perfectly: Art=Culture=Community

To my own ear, "Art Works" is the best solution of all. It's succinct, it's positive, it puts "art" in the first position, and it includes an active verb. It plays on artworks, the noun, and has a roll-up-your-sleeves, WPA* flavor that suits the current era of cutbacks and belt tightening.

I'm looking forward to seeing whether Landesman's innovations go beyond slogans. He certainly represents a stylistic change from the mild, conciliatory Gioia, a published poet. In the Times story, a colleague described Landesman as "mercurial," "unpredictable," and "an extraordinarily hardheaded businessman."

He's also a guy who doesn't shrink from making controversial statements on the record:

In American politics generally, [Landesman] added: “The arts are a little bit of a target. The subtext is that it is elitist, left wing, maybe even a little gay.”

Not that there's anything wrong with that.

Well, it certainly alarmed me: 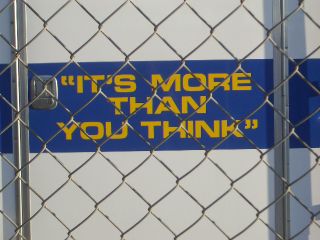 At the moment I noticed the slogan—on the side of a recruiting van for the Oakland Police Department, as it turned out—I wasn't thinking about anything excerpt merging into the left-hand lane, but I immediately began wondering, "More what?" More exhausting? More aggravating? More migraine-inducing? Probably all of the above, knowing Oakland as I do.

On the other hand, I could almost hear the immortal Inigo Montoya muttering disapprovingly, "I do not think it means what you think it means." Let's accentuate the positive! Perhaps "more" means "more rewarding," "more exciting," even "more doughnuts." Who knows?

Because ...  those quotation marks. They worry me. Slogans are supposed to be declarations of fact, not snippets of overheard dialogue. The punctuation renders the slogan slightly shady, somewhat second-hand.

And then there's the tacit assumption that the slogan-writer knows what I think. Just a little high-handed, no?

By the way, the OPD recruiting site is a different entity from the regular OPD site, which appears to have been designed and programmed by someone's nephew taking his first community-college Web class. I know Oakland is hurting, but this is an embarrassment.

For the record, my favorite unofficial Oakland slogan is this one. Don't bother to search for it; it appears on a T-shirt I bought about 15 years ago and have never seen since. 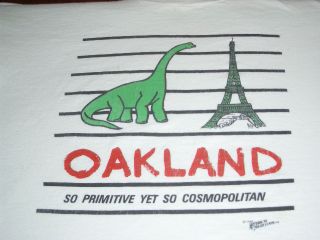 Dan at Notes from the Copy Editor has written a terrific series of posts about the U.S. Board on Geographic Names (the link is to an introductory post; scroll down to link to the other posts).

This proposal is to make official the name Sven Slab for a 91 m (300 ft) wide, 61m (200 ft) high cliff wall in the McDowell Sonoran Preserve, at the north end of the McDowell Mountains. According to the proponent, the name is widely used within the hiking and rock climbing community; the name came into use because Sven power saws were used to cut a trail to the base of the wall.

Read the whole series. And be sure to link through to Mighty Red Pen's post on Alaskan place names, which includes the notorious Chicken story.

By the way--and how very timely, this being Earth Day--my favorite reference on geographical names is Home Ground: Language for an American Landscape, edited by Barry Lopez. Within its 447 nicely designed pages you'll find definitions for kiss tank ("a pool of water left from the last rain and its runoff in a naturally formed rock basin"), gunk hole ("In coastal New England ... a small, out-of-the-way harbor or a nearly unnavigable shallow cover or channel"), paternoster lake (literally "our father": a circular lake found in a linear chain within a U-shaped valley; so called because of the chain's resemblance to a string of rosary beads), and much more.