Word of the week: Deadstock

On the shop’s website, you’ll find shoes made of “leather salvaged from dead stock inventory.”

What is deadstock (or dead stock)? Several things, depending on where you live and what you’re selling.

Deceased cattle may technically qualify as “dead stock,” but on a ranch or farm, deadstock is the opposite of livestock in a different way: It refers to equipment and implements.

The deadstock on Carol Young’s site is “dead” in the sense of “previously manufactured but unused.” Here’s an excerpt from a deadstock explainer published in September 2019 by Techpacker, a Brooklyn company that helps companies make samples quickly:

Deadstock fabrics are textiles which are sitting around as leftovers and are not part of a plan for immediate or future use. For example, it could be the leftover fabric of a fashion brand’s collection or it could also refer to unused textiles from movie sets or fabric mills.

Deadstock fabric is also known as overstock, surplus or jobber fabric; they all mean the same thing.

This sense of deadstock has been in use for centuries. Here’s the relevant entry (under dead) in OED:

c. Of goods: Lying unsold, unsaleable, for which there is no market.

In the niche market of athletic-shoe collecting, however, deadstock has a different and specific meaning that began emerging in the early 2000s. A June 2005 Urban Dictionary entry gives a terse definition:

Brand New. Never worn, Never Tried and would usually include a box for the shoes.

Unlike deadstock fabrics, which may have been sitting unremembered for years in a musty warehouse, deadstock shoes are often bought with the intention of future resale at a profit. 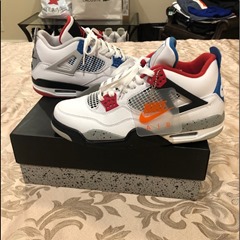 “Deadstock Jordan’s [sic] whatthe4s size 9.5 never tried on once. 1000% authentic with receipt from Nike;” $375 on the resale site Poshmark.. Does anyone else get a strong “For sale: baby shoes, never worn” vibe from this?

Adam Bluestein wrote about the phenomenon in a March 2, 2021, article for Marker:

Analysts predict the global sneaker resale market will reach $30 billion by 2030; last summer investment bank Cowen estimated the U.S. resale market was worth $2 billion in North America alone. Apart from Supreme, the hottest merch “collab” (usually indicated with an “x,” for example, Supreme x Comme des Garçons) a brand can score is with Nike (Adidas comes in second). Unworn Jordans, Airs, and Dunks — called “deadstock” — are the gold standard of the resale economy — and, really, as liquid and versatile a global currency as a U.S. dollar or a euro, “a bona fide asset class” as Bloomberg Businessweek put it recently. In marketplaces like StockX — founded in 2015 and now valued at over $1 billion — Stadium Goods, and GOAT a valuation of any given shoe can be obtained instantly.

Hat tip to Colin Morris, who posted the Marker link on the ADS-L listserv. He also found an 1897 instance of deadstock being applied to unsold clothing offered for resale in Laotian shops: “felt hats of various antiquated shapes, hard and soft, the deadstock of the shops of Bombay, Calcutta and London.”

Posted at 05:00 AM in Coronavirus, Current Affairs, Fashion, Medicine, Neologisms, Word of the Week | Permalink | Comments (0)