From the archives: Big Pink

Originally published on October 20, 2011 and republished here in honor of breast cancer awareness month and in memory of Barbara Ehrenreich, who died on September 1, 2022. I’ve removed some defunct links and updated others. Update: the NFL ended its pink-themed breast-cancer campaign in 2018.

“Pink” isn’t just a color, reports Natasha Singer in the New York Times; it’s a marketing strategy to raise money for breast-cancer prevention and research. And it’s a verb:

In marketing circles, “to pink” means to link a brand or a product or even the entire National Football League to one of the most successful charity campaigns of all time. Like it or not — and some people don’t like it at all — the pinking of America has become a multibillion-dollar business, a marketing, merchandising and fund-raising opportunity that is almost unrivaled in scope. There are pink-ribbon car tires, pink-ribbon clogs, pink eyelash curlers — the list goes on. 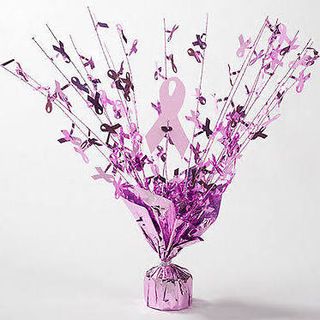 Like Big Oil, Big Food and Big Pharma, Big Pink has its share of critics. Some patient advocates complain that Komen and other pink-ribbon charities sugarcoat breast cancer, which kills about 40,000 American women and 450 men annually. Others complain that pink marketing, despite the many millions it raises for charities, is just another way to move merchandise and that it exploits cancer by turning it into an excuse to go shopping. And some pink-theme products have no relationship with any charities at all. (Consumers should check before buying.)

The Clichés of Cancer

Dana Jennings, a reporter at the New York Times, has been chronicling his diagnosis and treatment for prostate cancer. This week, though, he wrote about language:

We’re all familiar with sentences like this one: Mr. Smith died yesterday after a long battle with cancer. We think we know what it means, but we read it and hear it so often that it carries little weight, bears no meaning. It’s one of the clichés of cancer.

It is easy shorthand. But it says more about the writer or speaker than it does about the deceased. We like to say that people “fight” cancer because we wrestle fearfully with the notion of ever having the disease. We have turned cancer into one of our modern devils.

But after staggering through prostate cancer and its treatment — surgery, radiation and hormone therapy — the words “fight” and “battle” make me cringe and bristle.

Word of the Week: Cancertainment

Cancertainment: Comedy about cancer treatment, often created by and aimed at cancer patients in their 20s and 30s.

The term was coined around 1995 by Planet Cancer, whose website includes a cancertainment section with links to books, movies, games, and other diversions "to inspire, comfort, and keep you in stitches, even if you already are." (Typical cancertainment joke: "What's one of the top reasons to date a cancer chick? Recreational drugs are paid for by insurance.")

Prominent cancertainment spokespersons include Iva Skoch, a travel writer who was 29 when she was diagnosed with colon cancer; and Kairol Rosenthal, author of Everything Changes: The Insider's Guide to Cancer in Your 20s and 30s, who was diagnosed with thyroid cancer when she was 27. Skoch and Rosenthal were interviewed recently for NPR's "Fresh Air."

Iva Skoch wrote about cancer humor for Newsweek in July:

I have always joked about cancer, often to put other people at ease. At times, making jokes feels just as thin, forced, and fake as those HANG IN THERE kitten posters. But often, the reality is so overwhelming that all I can do is laugh.

A contributor to Urban Dictionary who evidently has had some personal experience with the issue submitted an alternate definition of "cancertainment":

All the screwball politics, bureaucratic bullshit, evil healthcare/HMOs, co-pays, premiums, corporations, the impossible labyrinths they send you through. This also includes the dinner time conversations with family, daily chit chat with friends as well as all the chemo therapy, drug treatments, MRIs, and the rest of the long list of things you have to go through when you have cancer. Almost totally non existent with socialized medicine.

UPDATE: Reader Michele Hush sent me a link to this story about The C Word, a new comedy on the Showtime cable channel, "which will star Laura Linney as a suburban mom diagnosed with cancer, approaching the subject from the same lighthearted perspective as Showtime's other half-hour shows, which still allows a lot of room for dramatic moments."