Royal Bitch is the name of the wine, one of a teeming sisterhood of cabernets and chardonnays from a variety of producers with labels like Sassy Bitch, Jealous Bitch, Tasty Bitch and Sweet Bitch. They’re reinforcements for a growing army of rude, budget-priced wines that have shoved their way into wine stores and supermarkets in the past few years — most recently Happy Bitch, a Hudson Valley rosé that made its debut last month.

The target market for these brands? Young women who call one another “bitch.”

Like a slap across the face, Bitch grabbed the attention of a certain type of consumer, primarily young women en route to a bachelorette or divorce party, or looking for a special way to say, “I love you” on Mother’s Day.

“They can buy it and say, ‘Here, bitch, I bought you a present,’ ” said John F. Umbach, the owner of Joseph Victori Wines, which distributes Royal Bitch and Sweet Bitch.

If “Bitch” strikes you as too effete, there’s always this: 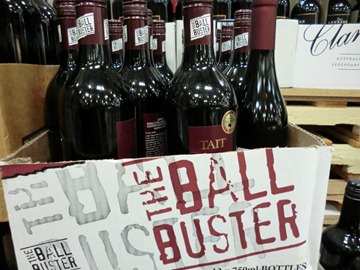 Tait “Ball Buster” wine, spotted at Costco, Nov. 28. At 15% alcohol, it’s more of a head-buster. Tait, a family-owned winery in Australia’s Barossa Valley, calls Ball Buster “Australia’s #1 wine in the US for under $20.”

Ball buster is, of course, slang for an extra-bitchy, testicle-harming woman. Oddly, though, the Ball Buster label copy claims that the contents of the bottle are “built like a stallion.” Maybe we’re not meant to think too deeply about it.

In the Times article, William Grimes traces the evolution (or devolution) of wine naming back to around 1980, when wine labels became “surfaces for communication.” “Casual became cheeky,” he writes. “Now, cheeky has given way to saucy.” A Vancouver brand consultancy, Brandever, recently named a British Columbia wine Dirty Laundry, an allusion to a long-gone bordello and Chinese laundry in the neighborhood. Dirty Laundry is saucy bordering on … well, “scratchy”:

“Your immediate reaction is, this is not a good name for a wine, but that’s why it is a good name,” said Bernie Hadley-Beauregard, a principal in Brandever. “It has a scratchy hook to it.”

It’s good because it’s bad! I must remember to use that line with my own naming clients.