Continue reading "Service with a shruggie" »

Posted at 06:46 AM in Advertising, BART, Food and Drink, Profanity, Technology | Permalink | Comments (1) 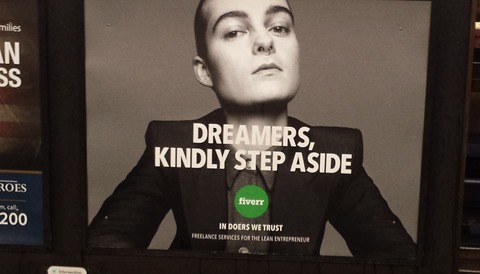 I spotted these beautiful, slightly surreal posters at Oakland’s MacArthur BART platform last week amid the ads for Wingstop, Ben & Jerry’s, and the new Spider-Man movie: 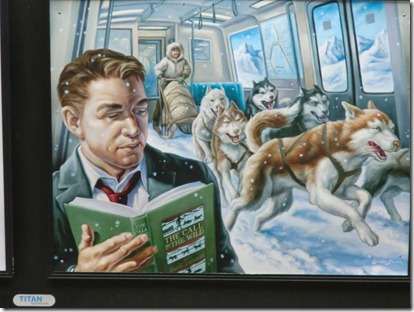 The Call of the Wild (Jack London). 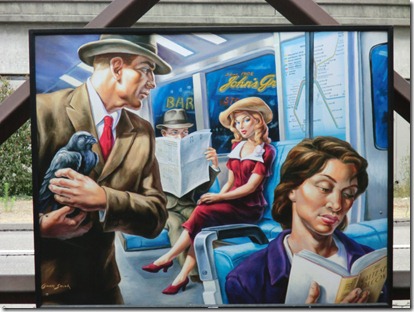 The Maltese Falcon (Dashiell Hammett). John’s Grill, in the background, was a setting in the book; it’s been in business since 1908.

The artist is Owen Smith, who is nationally known for his New Yorker cover illustrations in pulp-fiction style. Smith, who lives in Alameda, said in an interview with BART’s Melissa Jordan that he remembered taking BART from his childhood home in Fremont to “adventures exploring the big city of San Francisco.”

The posters are part of BART’s “Literary Journeys” series, which places art in unused advertising spaces along the train platforms. All three of the authors in Smith’s paintings have (or had) Bay Area connections. The third poster, displayed at other stations, depicts scenes from Amy Tan’s The Joy Luck Club.

Together the posters are evocative, mysterious, eye-catching.  Smith liked the idea that they conveyed a key benefit of public transportation – that a person can use time in transit to travel throughout space and time through the world of literature.

“You can spend your time reading on BART, whether it’s a book or on your Kindle or iPad,” Smith says.

You’ll note, however, that the readers in the illustrations are immersed in traditional books, which unlike their electronic counterparts have book jackets. If it weren’t for those jackets we wouldn’t see the titles of the books.

As a transit user, I’m happy to see my taxes and fare money being used to support artists and inspire readers. Looking at Smith’s posters, I couldn’t help thinking of all the beautiful and enduring WPA projects here in the Bay Area—from the elementary school down the street to the Coit Tower muralsand Maritime Museum in San Francisco—and wishing our current leaders had the courage and will to launch a new WPA. Maybe the BART posters are the first step in that direction.

Gold Enough for You?

Chipotle Mexican Grill is “celebrating 18 years of gold ingredients” by wrapping its burritos in gold-colored foil. Big whoop, right? Well, the wall-to-wall ads in San Francisco’s Montgomery Street BART station make it look like a Very Big Whoop indeed. This one wins a gold medal for Best Punning Use of the Periodic Table in a Fast Food Restaurant Advertisement: 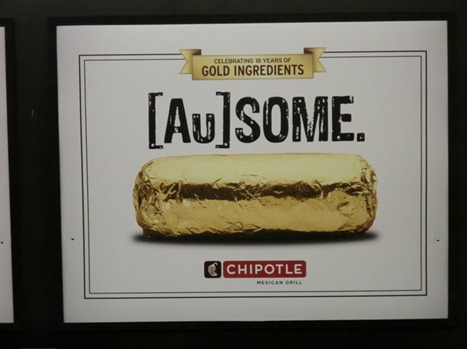 The other ads run the gamut from informative to moderately clever. 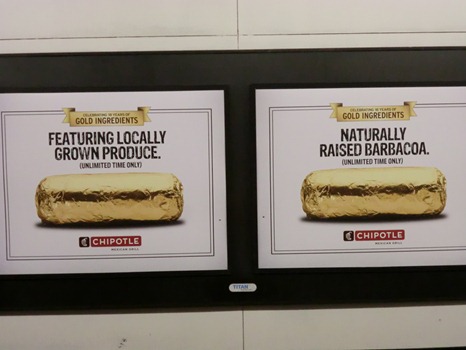 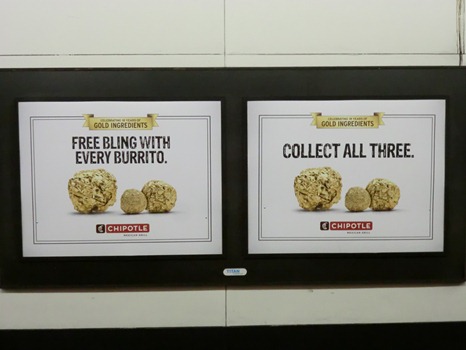 Is it just me, or do those images actually resemble shiny poop?

The promotion included a “Wrap What You Love” contest (grand prize: $10,000) that invited customers to submit photos of stuff they’d wrapped in gold foil. You can see the finalists here, and watch comedian/author/Chipotle spokescrafter Amy Sedaris undertake her own wrapping project here.

Do Ya Think We’re CEX-y?

In advertising, as we all know, sex sells. But CEX pays. 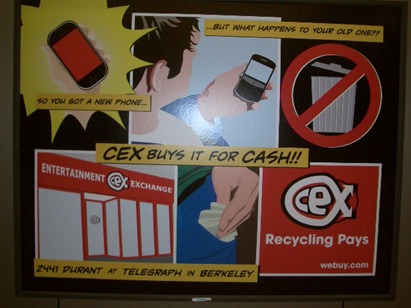 CEX—or CeX, as it’s spelled elsewhere—opened about six months ago in Berkeley, and this was the first I’d heard of it. But the parent company is almost 20 years old: It was founded in the UK in 1992 and spread to Spain in 2002; the first US store opened in 2007. According to the website, CeX stands for “complete entertainment exchange.” The original name was “Tottenham Court Road Computer Exchange,” which was pretty obviously not better than CeX.

According to one Yelp review of the Berkeley store—which is located a couple of blocks from the UC Berkeley campus—the sex/CeX homophony is not unintended. They call it that, wrote the reviewer, “because once you have CEX you come back for more!”

I’m willing to bet that logo’s spermlike design is no coincidence, either. 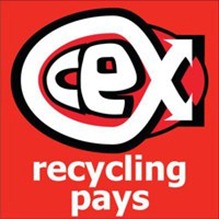 Amazingly, the About Us section of the US site is a duplicate of the UK original, which features the most flavorful, least corporate-sounding corporate copywriting I’ve seen in a long time. A sample:

Just think, if CeX were a kid, we'd almost be old enough to start college. Except we’re CeX, so we’d probably be skulking around the back of the bike sheds instead, playing Jet Set Willy on our hacked iPhones and re-enacting Bully for real. “But Sir, it’s only a game!”. And then having to write 1000 lines in detention: “I am not Jesus nor am I a Cylon”.

But honestly, folks, it’s been a blast. We’ve got the greatest job in the world and we’d like to thank each and every one of our custies for making it possible for us to spend all day surrounded by the stuff we love. Cheers, all. And hold on tight – we’ve plenty of neat-o ideas for the future and hope you enjoy the ride.

“Skulking,” “custies,” “neat-o”: Now, that’s a voice that resonates. The page is signed by founder Robert Dudani, and I don’t doubt for a minute that he talks exactly like that.

About the domain: CeX owns cex.co.uk and webuy.com. The owner of CEX.com appears to be waiting for an offer he can’t refuse.

Join.me, the new virtual-meeting service of LogMeIn1, has blanketed the MacArthur BART station in Oakland with text-only ads. You might call it a blizzard, because each ad is a snowclone.2 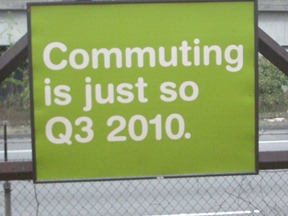 “X is just so Y,” or the simpler “X is so Y,” shows up millions of times in search results. The expression conveys jaded hipness, or hip jadedness, with an undertone of are-you-still-wearing-THAT? A few examples: Dead Is So Last Year, a novel by Marlene Perez; “Stealing Is So Last Season,” a New York Times headline; “Outrage Over Executives’ Pay Is So Last Quarter” (headline in the Seattle Times); “Twitter Is So Last Week” (headline on a Gartner blog post); “BP’s Oil Spill Is So Last Month” (Geeks Who Drink blog post title).

In Join.me’s case, the specificity of “Q3 2010” heightens the insider-ish quality (Q3 is business jargon) and the humor. 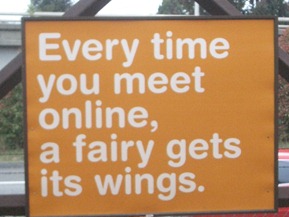 The substitution of fairy for angel struck me as odd, but then I discovered this image at SomeECards: 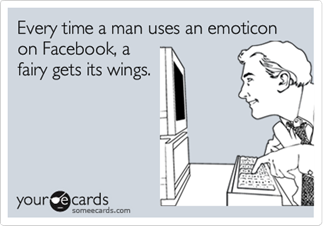 The intent of this variation is clearly derogatory: “real men” supposedly don’t use smiley faces. Join.me may have been influenced (somewhat perversely) by this artifact, or the copywriter may be confusing “clapping for Tinkerbell” with “bell-ringing for angels.” In either case, I find Join.me’s version too peculiar to be an effective snowclone—I found myself thinking, distractedly, about fairy divas and fairy = homosexual. 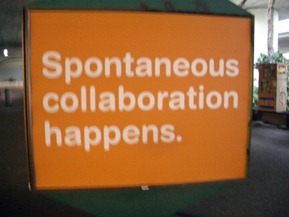 The “X happens” snowclone probably originated with “shit happens,” which the Yale Book of Quotations antedates to an article by Connie Eble, “UNC-CH Slang,” published in Spring 1983. “Shit happens” inspired a much-duplicated theological “shit list” (Taoism: “Shit happens”; Judaism: “Why does this shit always happen to us?”, etc.). Innumerable variations on “shit happens” include Shift Happens (a much-viewed slide presentation from 2006); Cheat Happens (“your number one source for game cheats and codes”); Love Happens (title of a forgettable 2009 movie); Knit Happens (“nirvana for knitters”); Compost Happens (a home and garden blog); and Disability Happens.

Join.me subverts the formula—“X” is usually a short, punchy word, often a pun on “shit”—by assigning a long, multisyllabic term to “X.” The new construction slows the reader down and makes comprehension anything but spontaneous. It’s a risky twist that pays off. 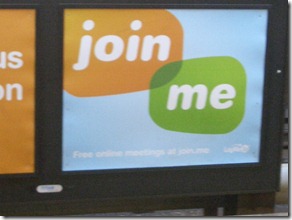 The .me domain extension in Join.me is the Montenegro country code.

1 Every time I see “LogMeIn,” I think it’s an item on a Chinese menu. “Join.me” is a lot clearer.

2 From the Snowclone Database: “A snowclone is a particular kind of cliché, popularly originated by Geoff Pullum. The name comes from Dr. Pullum’s much-maligned ‘If Eskimos have N words for snow, X surely have Y words for Z’. An easier example might be ‘X is the new Y.’ The short definition of this neologism might be n. fill-in-the-blank headline.” 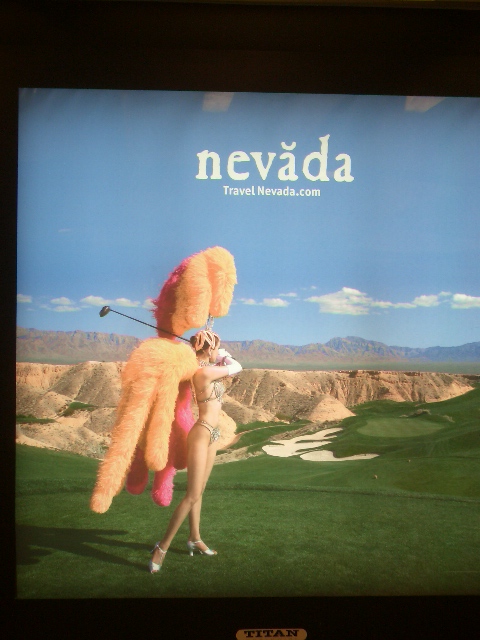 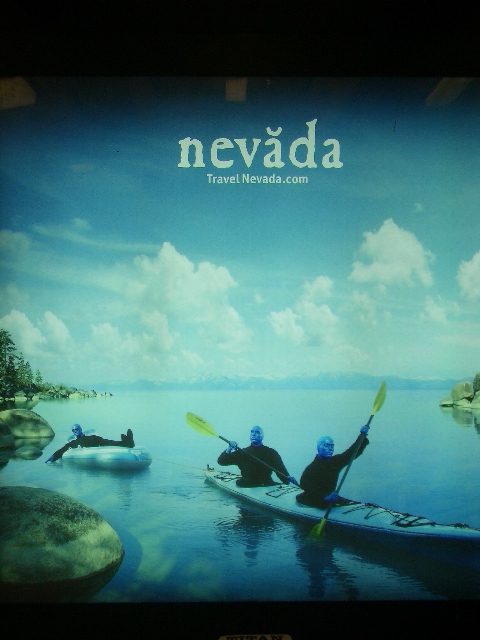 Members of the Blue Man Group kayaking on what appears to be Lake Tahoe.

The images (there are several others) are cleverly conceived and staged. But you know what made me smile? The diacritical mark over the first a in Nevada, signifying a short vowel sound.

Yep, here in the West we rhyme the second syllable of Nevada with dad, not wad. We hear you Easterners trying to be "correct," saying "Ne-vah-da," and we roll our eyes.

Plus: You've just gotta love an ad that assumes that average American transit passengers know (a) what a diacritical mark is and (b) what it means.

The campaign was originally created by The Glenn Group (Reno) and adapted for BART by Travel Nevada.

P.S. See my other posts on BART station domination: Perrier and Pepsi.