But I won’t do that

I’ll willingly – nay, happily – answer a lot of questions about names and naming without charging a dime.

I’ll give you tips about strategy. I’ll offer examples of effective names and bad names. I’ll suggest an outline for writing a naming brief. I’ll talk about URLs and searchability. I’ll show you how to create names with emotional appeal. I’ll set you straight on naming myths.

I’ll do a lot without a signed contract and first-installment check, but there’s one thing I won’t do.

Continue reading "But I won’t do that" »

A few years ago I wrote a guest post for the trademark-and-branding blog Duets Blog that, if I say so myself, seems as fresh and relevant today – especially today – as it did then. I’ve updated it a bit and am publishing it here as a public service.

Answering Your Questions About Naming

I realized just the other day that I’ve never written here about my involvement with the question-and-answer site Quora. I’ve been participating since 2013, answering questions about names, taglines, and verbal-branding strategy. Anyone can post a question, and anyone can answer; the platform is free for users, and the tone is generally civil and helpful.

Here are some questions I’ve answered in recent months:

And here’s a complete list of the questions I’ve answered or upvoted.

I’m marching to the beat of the Strong Language drummer, with a new post about naughty-sounding brand names with innocent meanings. It may be the only post you’ll read today that has the tags appliances, beverages, pee, and smegma.

Also: March 4 is National Grammar Day, an occasion for remembering what grammar is and is not. (It’s not spelling and punctuation, for starters.) Here are some good places to start:

Under the capable leadership of Mark Allen, ace copy editor, I was one of the judges in this year’s National Grammar Day Tweeted Haiku Contest. (The job was my reward/penance for having won the contest last year.) I am pleased to report that we have selected our winners. Congratulations to first-place poet Adriana Cloud and all the other contestants! Enjoy their haiku, and don’t let any dangling modifiers hit you on your way out.

Naming Advice from a Cartoonist

And not just any cartoonist, either.

Bob Mankoff is the cartoon editor of the New Yorker, which means that, among his many other duties, he judges the magazine’s weekly caption contest. Since the contest went weekly in 2004, readers have submitted more than two million entries. Inevitably, Mankoff has pondered why some captions succeed and others fail. And in one chapter of his new memoir/history How About Never—Is Never Good for You?*, published earlier this year, he shares his advice about how to beat the odds.

Here’s the thing: the advice doesn’t apply only to cartoon fans and contest hobbyists. To my surprise and delight, I found that it’s highly pertinent to my own discipline of name development.

I’ve been partnering for several months with Clarity.fm to give short, focused phone consultations about names and verbal branding. I’ve talked to business owners in Mexico, Australia, England, Brazil, and the U.S.; I’ve answered questions about company names, product names, taglines, and even Twitter handles. Most of my callers can’t afford comprehensive name-development services; what they want from me—and my 20-plus years in the branding business—are tips and feedback.

A few themes have emerged from these calls—common naming challenges that many entrepreneurs face. I share them with you in case you’re struggling with your own do-it-yourself naming project.

Guest Post on Duets Blog: The Last Naming Advice You Need to Read!

I’m over at Duets Blog today with a post that compiles the most incredible naming advice you’ll read all year. Or the least credible, anyway.

Book Review: “How to Not Write Bad”

Ben Yagoda’s new book has a cheeky title: How to Not Write Bad: The Most Common Writing Problems and the Best Ways to Avoid Them. It’s a compact little volume, just 172 pages, that’s intended for students and teachers but will be welcomed by anyone who wants his or her* writing to be appreciated. And it’s such a good example of good writing—vivid, charming, funny—that even experienced writers will read it with pleasure. 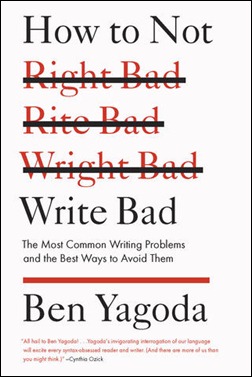 In his introduction, Yagoda says the inspiration for his title came from a psychoanalytic concept first proposed in the 1950s: “the good-enough mother” (or parent) who doesn’t solve every problem but still manages to get the job done pretty well. “What I’m talking about here,” Yagoda writes, “is good-enough writing. As with parenting, it isn’t necessarily easy to achieve, but it’s definitely achievable. And it’s a decidedly worthwhile goal.”

How to get there? By reading a lot, of course—preferably writing that has been “selected and processed by an editor, and then ‘published.’” And once you sit down to write, Yagoda says, write mindfully. (Here I pause to consider that Ben Yagoda’s surname can be anagrammed into god, yoga, and Yoda.) A big part of mindful writing is maintaining “an awareness of and attention to the (hypothetical or real) person who will eventually be reading your words.”

Yagoda teaches advanced journalism and writing at the University of Delaware—he also writes the Not One-Off Britishisms blog and is a regular contributor to the Chronicle of Higher Education’s Lingua Franca blog—and most of the examples in the book come from his students. The majority of those students, he writes, “put me in mind of what Jack Nicholson famously shouted to Tom Cruise in A Few Good Men. The Cruise character couldn’t handle the truth, Nicholson said. Well, most students, I’ve found, can’t handle writing ‘well.’ At this point in their writing lives, that goal is simply too ambitious.”

One bad student example should suffice:

The criteria that made this site able to be nominated are because of the uniqueness of the content it possesses.

Some specific bits of wisdom from How to Not Write Bad:

On preparing to write: “First, turn off the radio, the iPod, the television; put your phone on silence and in your pocket, X out of or minimize all screens other than the one you’re writing on. Multitasking = bad writing.”

On spelling: “Spell-check, in many ways a wonderful innovation, has caused spelling muscles—never especially robust to being with—to atrophy to the point that they now have the firmness of mint jelly.”

On punctuation: “You can dismiss apostrophes—and punctuation in general—as just a series of technical details. I prefer to look at them as measures of mindfulness.”

On the inadvisability of punctuating by ear: “”[S]tudents tend to insert commas at places where they would pause in speaking the sentence. This has about the same reliability as the rhythm method in birth control.”

On the passive voice: “The passive is a problem if and only if it leaves in its wake an insistent question that begins with the word Who?”

How to Not Write Bad is available in all the usual places, in print and e-formats, including, naturally, on Amazon, where Yagoda admits to obsessively tracking the book’s ranking. On publication day, February 5, he combined this “narcissistic endeavor” with some fitting philanthropy: For every ranking drop of 100, he donated a copy of How to Not Write Bad to Mighty Writers, a Philadelphia after-school program that teaches kids ages 7 to 17 “to think and write clearly.” I think the game is off now—at last check he’d donated 17 copies—but you may still want to support Mighty Writers, which looks like a mighty fine endeavor. And buy the book, of course.

By the way, once you’ve mastered the advice in How Not to Write Bad I suggest you read Yagoda’s 2005 book The Sound on the Page, which I wrote about in 2007.

* Yagoda acknowledges that within 10 to 15 years many uses of singular they will be acceptable in formal writing. “However,” he writes, “they’re not acceptable now, so you have to make adjustments.”