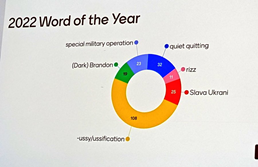 “suffix from ‘pussy’ (as in ‘bussy’ = ‘boy pussy,’ now humorously attached to many words.”

So much support for “-ussy” in this room, from @kirbyconrod speaking about its gender neutrality to others talking about how it’s a rare case of a word historically associated with women’s bodies that isn’t pejorative #WOTY2022 #LSA2023

Vulture contributor Bethy Squires explained it at much greater length in a January 2022 article, “We Asked Linguists Why People Are Adding -Ussy to Every Word”:

In certain pockets of the internet, the -ussification of language is inescapable. Riffing off “bussy’ (a portmanteau of “boy” and “pussy”), now everything is a cat or a cavity. A calzone is a pizzussy. A wine bottle has a winussy. Princess Fiona has an ogussy. … The insertion of this new suffix into our lexicussy is mostly confined to online speech, but it reflects a general memefication of language and destabilization of meaning that is popular with the young. Especially the “gays and the theys,” people for whom rigid taxonomy has often been oppressive. This -ussification is 1) kind of annoying, perhaps even on purpose. And 2) a great equalizer. It is subversive, it is Bottom Rights. Everybody and everything has been reduced to their hole.

This may be the first occurrence of ussification in print, but I’m willing to stand corrected.

“Certain pockets of the internet” is the key phrase here. If you don’t spend a lot of time on (especially) TikTok, you can be forgiven for having missed the (w)hole -ussy thing.

“Put Your Whole Linguüssy into It,” via Beyond Language, who tweeted that the vote was “UNBELIEVABLE. And fantastic.”

For the record, the earliest Urban Dictionary entry for -ussy (“the suffix used to describe an object’s pussy”—or cavity of any sort) is dated June 28, 2021. But it had been in use long before then. According to Know Your Meme, bussy (“a male homosexual’s anal opening”), was originally defined in Urban Dictionary on March 7, 2004, but is in fact much older: “Multiple definitions of the word note that the word had been used by the queer community starting in the early 1990s or late 1980s. An exact origin is unknown, however.” Thrussy (“throat pussy”) and thussy or the Old English-y þussy (“they/them pussy”) emerged in 2017. By September 2017, Twitter user @gabbomatic could tweet that “words that end in -ussy have been ruined. all of them.” Sorry, @gabbomatic: The American Dialect Society begs to differ.

Also for the record, all of these -ussy portmanteaus rhyme with pussy, not fussy, hussy, or gussy. 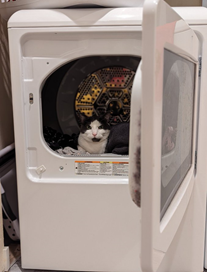 Mike Pope’s cat in a clothes dryer = pussy in a drussy. (Thanks, Mike!)

This was the thirty-second American Dialect Society Word of the Year vote, and what more useful way to celebrate the occasion than to look back at the very first winner, announced in January 1991. It was bushlips. I’m sure you remember it well.

2. My own Words of the Year for 2022. I take some satisfaction from the fact that two of the words on my list, quiet quitting and it’s giving, won their respective ADS categories. If I had to pick an overall winner, it would be J6.

Posted at 05:35 AM in Linguistics, Portmanteaus, Profanity, Slang, Suffixes, Word of the Week, Word of the Year | Permalink

You introduced me to -ussy today. My initial response puts me in the WTF camp. It seems a labored locution. A January 2022 Vulture article uses -ussification. It was difficult to read the article because I find the usage examples annoying. https://www.vulture.com/2022/01/bussy-trend-linguists-explain.html.

Hi Katherine--Thanks for reading and commenting. I cite the Vulture article in my post.

The Baader–Meinhof phenomenon is at work: I NEVER heard any form for -ussy all year until the day I read your blog. Then – that very day – I was substituting at a middle school, and I overheard a conversation in the hallway where a young man used the word “bussification.” I couldn't believe it -- though it really came as no surprise as I am a firm believer in Baader-Meinhof. #justsaying