Word of the week: Pessimism

What, you were expecting something upbeat to kick off the new year? How little you know me.

I lean by default toward the dark side. I don’t anticipate any just deserts to result from the January 6 Select Committee’s final report, damning though it may be. I’m not sanguine about the prospects for my struggling city under its new leadership, or any leadership. I don’t expect California’s drought to ever end, no matter how many record-setting rainstorms we get. In personal news, I’m unlikely to start swimming significantly faster despite any New Year’s “intentions” I might set.

That’s just how it goes.

A couple of weeks ago, my brother Michael sent me a photo of the sudden and tragic demise of his Pessimist’s Mug (always half empty!), which reacted to cold tap water with a fatal crack.

The mug is sold out on Etsy. Of course it is.

Still musing about this split-up, which seemed to symbolize something, I heard an interesting snippet in Episode 4 of the “Shameless Acquisition Target” podcast. (The whole series is informative and entertaining; check it out.) Creator/narrator Laura Mayer, researching ways to monetize her podcast, quotes one of her advisors quoting (he says) William Butler Yeats. It’s a great quote: “Being Irish, he had an abiding sense of tragedy, which sustained him through temporary periods of joy.” The fact that absolutely no one has been able to actually trace it to anything Yeats wrote, or to anything anyone wrote to Yeats,* does not detract, in my opinion, from its essential truthiness. (I suppose you could substitute “Jewish” or “Russian” for “Irish” and it would be just as valid.) 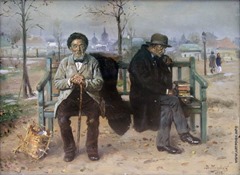 Pessimists have always been with us (they might have been called “melancholic” or “gloomy”), but pessimism—“a negative mental attitude in which an undesirable outcome is anticipated from a given situation”—is a relative latecomer to the lexicon. It comes from the Latin pessimus (“the worst”), which itself may be related to Latin ped, meaning foot: thus, “bottom-most.” (The opposite of optimum is pessimum. Use it in a sentence sometime!) In the sense of “the worst condition possible,” pessimisme first appeared in French in the Jesuit response to Voltaire’s 1759 novel Candide, ou l’Optimisme. “Voltaire was satirizing the philosophy of Leibniz who maintained that this was the ‘best (optimum) of all possible worlds’. In their attacks on Voltaire, the Jesuits of the Revue de Trévoux accused him of pessimisme” (Wikipedia). The English word began appearing in the early 1800s. 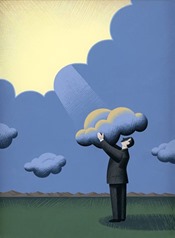 Pessimism isn’t a popular outlook in success-at-all-costs America, but I’ve been cheered, in my lugubrious way, by the existence of the Pessimists Archive, “a project to jog our collective memories about the hysteria, technophobia and moral panic that often greets new technologies, ideas and trends.” Umbrellas are for sissies! The Walkman turned people into wind-up humans! Yes, (some) people actually made those claims. You can subscribe to the Pessimists Archive newsletter or listen to the companion podcast, which also used to be called Pessimists Archive but is now called Build for Tomorrow because, as creator Jason Feifer puts it, “this show is optimistic—and we needed a name that reflected that.”

I’m a little disappointed in you, Jason. But I’ll give the show a listen anyway.

In the meantime, here’s my realistic new year’s anthem, courtesy of Mel Brooks and The Twelve Chairs (1970). It is, naturally, one of my favorite songs.

* Many have tried. See, for example, this post on the “Widening Gyre” blog and this 2009 column on Cleveland.com. The best anyone can do is “source unknown.”

Posted at 06:00 AM in Isms, Quotations, Word of the Week | Permalink

The first email I saw this morning was a notice of your blog post with "pessimism" as the Word of the Week. I then turned on the radio as the news began with a feature on the public's pessimistic view for 2023 (mainly due to the economy, but also due to political and personal worries as well). Then the first text I received today was from a friend who'd just seen my choice for "Word of the Year" on my website (Here: https://www.thedickinson.net/words-of-the-year-2022.html). The text read, "Awww...you need this dose of optimism," and she provided this link: https://tinyurl.com/2hxny2kr

The "dose" is a bit lengthy but offers some glimmers of hope from 2022 when "folks both abroad and at home stepped up to the plate" -- but Imma be honest: I need more. I have a severe case of PTSD (Post Trump Stress Disorder). #justsaying

Oh, of course the mug's sold out on Etsy. Of course.
*sighs heavily in pessimist*

I've always wanted to produce and market a "Dare to Fail" rally, a realist convention. It would feature selected glum philosophers, journalists, and comedians.
But it would probably be boring, and no one would come. It would never work.

(I'm one of those people who piss off survey writers because I don't strongly like, dislike, agree with, or disagree with anything.)