For a couple of years I’ve been participating in a food-testing program in which I receive free, full-size “better-for-you” products in exchange for posting online reviews. Some of the products are hits: loved the Haven’s Kitchen sauces and the Cleveland Kitchen kosher dill pickles! (“Kitchen” shows up a lot in these names, possibly to evoke quaint kettles simmering on a bustling homemaker’s stove.) Others are misses: The less said about those packaged “soft-baked” cookies, and those parmesan crisps with the unpleasant aftertaste, the better.

Last week I trotted over to Whole Foods to redeem a coupon for a product from yet another kitchen: Primal Kitchen Buffalo Mayo with avocado oil. 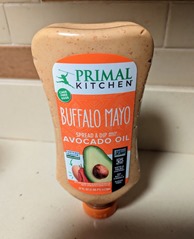 This 17-ounce squeeze bottle was free with my coupon. Regular price: about $15. Hear my primal scream.

After I’d sampled it on some steamed broccoli—probably not the typical Buffalo Mayo use case, but I was working with what I had on hand—I dutifully went to the website to post my review. Everything was going fine until I reached this question:

“How was the flavor? ☐ Good balance of Buffalo and Mayo ☐ Too spicy ☐ Not spicy enough”

So, a couple of things here.

First, I wondered why it’s capital-M “Mayo” and not “mayonnaise.” Sure, “mayo” has been an acknowledged abbreviation for “mayonnaise” since about 1930. But most commercial mayonnaise brands—Best Foods, Hellman’s, Spectrum, Kraft, Trader Joe’s, et al.—use the full word on the label. Those that call themselves “mayo” may be skimping on more than spelling: The US Food and Drug Administration defines “mayonnaise” as a condiment that contains a specific amount of vegetable oil and egg yolk. A 2017 article from McGill University’s Office for Science and Society discussed Just Mayo, a product from Hampton’s Creek that contains no eggs, just as Hampton Creek’s Just Eggs contain no eggs. (I know. It’s confusing.) Since “mayo,” unlike “mayonnaise,” is undefined, it doesn’t have to meet FDA standards.

But Primal Kitchen’s Buffalo Mayo does contain eggs (organic ones!) as well as avocado oil. It’s not clear what message the brand is sending with “mayo” if it isn’t “We’re mayo-ish, but not actual mayonnaise.” Maybe they’re just being chummy.

Then there’s “Buffalo.” The questionnaire assumes I know that we’re not talking here about the oh-give-me-a-home animal (strictly speaking, Bison bison, aka American buffalo). Instead, “Buffalo” is shorthand—a metonym—for a spicy sauce invented in 1964 at the Anchor Bar in Buffalo, New York, to serve on chicken wings. The original recipe contained melted butter, hot sauce, and cayenne—no mayo, or mayonnaise. The dish remained a mostly local phenomenon until the early 1990s, when the Buffalo Bills football team played in the Super Bowl for four consecutive seasons and the media needed a lot of filler. Buffalo wings made it to national TV, and soon were flying across the country. The sauce took on a life of its own; as the website for Salmon Brokers, in Spring, Texas, puts it:  “The term ‘buffalo’ is now attached to other food items that are seasoned with the hot sauce first used on the ‘original’ chicken wings.” Salmon Brokers sells a Buffalo Salmon Burger “filled with exciting flavor.”

I’m pretty sure I’ve never eaten Buffalo wings—I know, I’m a bad American!—let alone a Buffalo Salmon Burger, and I’d definitely missed the transition from “Buffalo seasoning” or “Buffalo spice mix” to the standalone “Buffalo.” Now that I know about it, I’m wondering why my questionnaire chickened out (so to speak) with the rest of the choices. Shouldn’t “not spicy enough” be “not Buffalo enough” and “too spicy” be “too Buffalo”?

Etymology note: Buffalo came into English in the 1580s from Portuguese bufalo, meaning “water buffalo” (the true buffalo). The word can be traced back to ancient Greek boubalos, which was the name of a kind of African antelope. The city of Buffalo took its name from Buffalo Creek (now Buffalo River); how the waterway got its name is up for debate. The color buff—a light brownish yellow—comes from buff-skin, or buffalo hide. The verb to buffalo—to overawe, to frighten, to confuse, to threaten—is of US origin, according to Green’s Dictionary of Slang, which traces it to 1878 and notes that it’s derived from “the size and strength of the animal.”

Maybe we can make the sentence extra-spicy by adding another Buffalo, this one standing in for the peppery sauce. Anyone want to give it a try?

Posted at 06:00 AM in Food and Drink, Linguistics, Naming, Place Names | Permalink

Having eaten my fair share of Buffalo wings, I think I understand why "balance of Buffalo and mayo" and "spicy" are separate questions. The Buffalo style (I resist calling it simply "Buffalo") is a flavor; it has gradations from spicy to mild. It probably started out as spicy, and then milder versions were developed to make it palatable to more people.

Thank you for your intrepid reporting. Now I don't need to drop 15 bucks on a jar of maybe-not-up-to-FDA-specs mayo.