Book #1 is Crash Blossoms, Eggcorns, Mondegreens & Mountweaels: 101 Terms About Language That You Didn’t Know You Needed, by Mike Pope. It’s available only as a Kindle edition, which for once makes complete sense, as it’s full of useful hyperlinks. 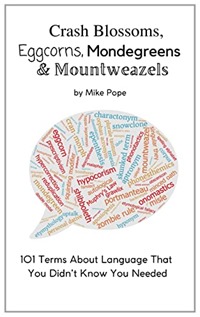 Mike, who lives in Seattle, is a technical editor at a very large internet company (rhymes with Shmoogle); he also publishes a couple of excellent blogs, one about words and language and one about … other things. I was greatly honored when Mike asked me to review his book in manuscript, and delighted to receive my Kindle copy earlier this week.

Crash Blossoms is fun to dip into and even edumacational. (That last word is an example of infixing, also known as tmesis. You can read all about it in Mike’s book.) Mike also covers back-formation (to burgle, to conversate), clipping (condo, flu, lab), recency illusion (“the idea that or usage originated recently, when it’s actually been around much longer”), and—of special interest to me, natch—many, many -nyms: contranyms, mononyms, retronyms, demonyms, and more.

In an introduction, Mike notes that this book is not a usage manual: “My goal is not to tell you how to use words, or what words to avoid, or how You’re Doing It Wrong.” Instead, it’s a book for anyone interested in language’s twists, turns, and surprises—the perfect gift for your favorite word nerd, or for yourself.

Book #2 also takes a humorous look at language, but from an editor’s point of view—when the editor is also a cartoonist. Thus: An Editorial Cartoon, by Iva Cheung. 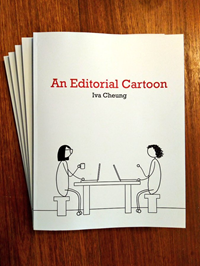 Above: the paperback edition. (It’s also available in hardcover.) Find it at Bookshop.org, Barnes & Noble, at that very large online retailer (rhymes with Shmamazon), and elsewhere. See Iva’s blog post for details.

I got to know Iva through Twitter and her blog, on which she’s been publishing a monthly cartoon for ten (!) years. Here’s the April 2022 cartoon, which struck a chord with me. Iva is an editor and indexer in Vancouver, BC—you may notice a Pacific Northwest theme in today’s post—which is where I met her IRL back in 2017.

All of the cartoons in the book have alt text, which makes them accessible to everyone who uses screen readers. And, says Iva, “One dollar from each book sold goes toward Indigenous editing and publishing initiatives through the Indigenous Editors Association.”

Congratulations to Iva and Mike! And happy reading to all.