Bellingcat. The open-source intelligence organization Bellingcat has done important investigations this year using geolocation and other techniques to combat Russian disinformation, far-right conspiracies, and Elon Musk’s claims about private-jet tracking. When I wrote about Bellingcat in March, I focused on its interesting name, whose roots lie in an Aesop’s fable.

Dobbs.  Just as the landmark 1973 case became known as Roe—an abbreviation of Roe v. Wade—this year’s landmark decision overruling Roe and undoing the federal right to abortion is known by the name of its plaintiff. But who is Dobbs? He’s Thomas E. Dobbs, state health officer with the Mississippi State Department of Health, who appealed a lower court’s decision striking down the Gestational Age Act. Dobbs, acting on behalf of the state, asked the US Supreme Court not only to uphold the law but also to declare Roe unconstitutional. It did so on June 24, 2022. Read my May 2022 post about abortion rights.

Elizabeth. Queen Elizabeth II died in September; her last prime minister, Elizabeth (Liz) Truss, lasted all of seven weeks at 10 Downing Street. And Elizabeth Holmes, the onetime founder/CEO of the blood-testing company Theranos, was sentenced in November to 11 years, 3 months in federal prison for defrauding investors in Theranos, Inc. of hundreds of millions of dollars.

Elmo. Muskrat, Space Karen, Melon Husk: The nicknames for Twitter’s new fatcat owner multiplied after he “let that sink in” on  October 26. The most consistent one has been Elmo, a near-anagram of Elon Musk’s first name. It manages to shroud its object’s identity (a practice sometimes known as Voldemorting) while deriding him as a goofy Muppet. 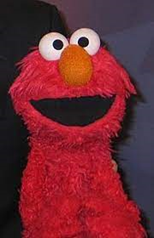 This Elmo is nicer.

Kyiv.  After the Russian invasion of Ukraine on February 24, 2022, many news organizations in the West announced changes in the spelling and pronunciation of the city’s name, switching to the Ukrainian Kyiv (KEE-ef) from Russian Kiev (kee-EV). Here’s how the CBC explained the switch: “[A]ccording to Natalia Khanenko-Friesen, director of the Canadian Institute for Ukrainian Studies at the University of Alberta, the name ‘Kiev’ is now associated with the Russification of Ukraine. In recent years, more and more publications, governments, airports and geographical dictionaries have switched the spelling to the Ukrainian variant, she said.”

P-22. The “celebrity mountain lion” P-22 lived and died in Los Angeles, but his story had global reach. He had more than 10,000 followers on Instagram and inspired the construction of a wildlife-crossing bridge on the 101 freeway. Estimated to be about 12 years old—old for his breed—P-22 lived most of his life in Griffith Park. By the time he was euthanized on December 17, he was suffering from multiple chronic health conditions and injuries from an encounter with a car in early December. The P in P-22 stands for puma, another name for mountain lion; the numeral tells us that this animal was the twenty-second in the region to be tagged with a tracking collar.

SBF and FTX. The two three-letter acronyms (TLAs) are closely linked, so I’m including them in a single entry. SBF is Sam Bankman-Fried, the disheveled 30-year-old founder and former CEO of the cryptocurrency exchange FTX (“Futures Exchange”, which he’d founded in 2019. FTX filed for bankruptcy in October 2022 and SBF’s net work plummeted from about $26 billion to approximately zilch. SBF hightailed it to the Bahamas, where federal investigators caught up with him on December 12; he is under indictment in the U.S. District Court for the Southern District of New York on multiple charges including wire fraud, securities fraud, and campaign tax-law violations. Three-letter initialisms are all too common in company brands (IBM, BMW, CVS), but they’re relatively uncommon as public-figure names, and are found mostly in politics (JFK, LBJ, AOC). SBF is an exception in that regard, but his exceptionalism in other areas appears to have been overrated.

Tiktaalik.  In April scientists announced new discoveries about the anatomy of an extinct “fishapod” that lived about 375 million years ago. And that discovery, as I wrote in May, led to a spate of Tiktaalik memes. Tiktaalik is an Inuktitut word that means “large freshwater fish that lives in the shallows.”

Wordle. The addictive wordplay game was created in mid-2021 by Josh Wardle (his real name), a Brooklyn software developer. The game made the news in January 2022 when Wordle sold it to the New York Times for an undisclosed low-seven-figure sum; the Times so far has kept its promise to keep the game free to all users. Not only is “Wordle” an excellent name, it’s spawned many spinoff names ending in -le, including Globle, Worldle, and (my current favorite/nemesis) Artle, which is produced by Washington’s National Gallery. 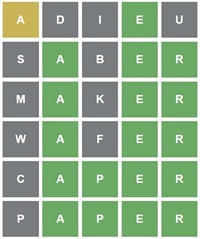 The correct answer was TAPER. There went my streak.

Ye/Yeezy. The hip-hop artist formerly—or as he put it in 2018, “formally”—known as Kanye Omari West is now simply Ye, and as Ye he got into a lot of hot water in 2022. Employees accused him of using porn and bullying as management techniques; he wore a “White Lives Matter” T-shirt at the Paris fashion shows; he made repeated public antisemitic comments; he praised Hitler in an interview with radio host Alex Jones; and he was temporarily suspended from Elon Musk’s Twitter for tweeting a swastika. As a result, in October Adidas terminated its partnership with Ye’s Yeezy brand, which had lasted for more than seven years. “Yeezy” is a shortening of “Kanyeezy,” the nickname given Ye by Jay-Z in 2003.

When Ye announced his name change in 2018, he said the name “went from Kanye, which means the only one, to just Ye – just being a reflection of our good, our bad, our confused, everything.” (The Yoruba name Kanye means “next in line”; its meaning in Igbo is “let’s give.” There are, however, some languages in which Kanye can mean “only once” or “only one.”)

And here’s my 2021 list of Brands of the Year, with a link at the bottom of the column to previous BotY lists.