The kanji of the year, announced on December 12 by the Japan Kanji Aptitude Testing Foundation, is 戦 (ikusa / tatakau), which translates to “conflict,” “war,” or “strife.”

The city of Berkeley, California, is seeking ideas for a city motto, song, and flag. (Berkeleyside)

Punctuation in the news:

The French are “mangling their own language,” reports The Economist’s language columnist, Lane Greene. Evidence? “A fondness for brands composed of phonetic misspellings. …  The latest trend is to apply this phonetic play to English words, which may themselves be unfamiliar, but become even more so in the French rendering. New French brands include Izipizi, a fashionable chain of spectacles which to the English ear sounds like ‘easy-peasy’.”

I, in fact, own a pair of Izipizi lunettes de soleil, and I love them, but it took me a ridiculously long time to decipher the brand name. (I thought it was a Basque word.)

This scene from In the Loop (2009), featuring Tom Hollander and Chris Addison, is what I always think of when I hear “easy peasy.”

For more on “easy-peasy,” see this May 2022 post by transatlantic expert Ben Yagoda.

Why do we use carat/karat for diamonds and for gold? Andy Hollandbeck explains. (Saturday Evening Post; h/t Mike Pope)

What should we call lab-grown plant-based “meat”? Reuters spoke to name developer Anthony Shore to get some answers. (Video) My own answer: probably not shmeat.

A remembrance by Michael Bierut of George Lois, who died November 19 at age 91. Lois was the designer who created more than 90 memorable covers for Esquire magazine in the 1960s and early 1970s. “Each cover seemed to perfectly illustrate the ethos of the Big Idea. Yet at their most effective, each also concealed a tantalizing bit of ambiguity.” (Fast Company)

This month’s newsletter from lexicographer Erin McKean (Things I Learned While Looking Up Other Things) is a compilation of interesting words she saved in 2022, including aquamation (like cremation, but involving water) and (I love this one) marmoteer.

Speaking of Things People Learned, Tom Whitwell came up with “52 Things I Learned in 2022.” Here’s #30: “In the 1920s, new car sales were falling, so the industry promoted the term ‘jaywalking’ to blame accidents on pedestrians, rather than aggressive drivers.”

Do you swear like a sailor, a trooper, a lord, a cowhand on payday? Stan Carey dug deep into “swear like a ___” for the Strong Language blog.

Wi-Fi doesn’t stand for “wireless fidelity” or for anything else. It’s purely madeupical. (TechRadar) (h/t MJF)

Over at the ZinZin blog, Ali Sell takes a look, and a sniff, at the names of scented candles: “the whiff before the whiff.” Until I read this post, I hadn’t known there was a candle scent called Two Weeks’ Notice: Smells Like Burn Out and Peace Out.

And finally: Last week a group of House Republicans passed out lapel buttons in support of California Rep. Kevin McCarthy. The text on the buttons read, simply, “O.K.” It was supposed to mean “Only Kevin,” but as opinion writer Dana Milbank pointed out in the Washington Post, “the message had an unfortunate double meaning that highlighted the doubts about the always-a-bridesmaid-never-a-bride candidate for speaker. McCarthy is just that: Okay. As in: not great. Not even above average. Just okay.” (h/t Dan Freiberg) Bonus link: My 2010 post about OK Soda, Coca-Cola’s expensive mid-1990s flop. 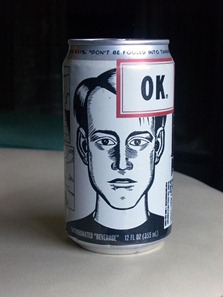