« Word of the week: It's giving | Main | November linkfest »

Word of the week: Trashion

I’m late to trashion, a portmanteau of trash and fashion that has been cycling around for nearly two decades. It wasn’t until I read the November 11 “Open Thread” newsletter from Vanessa Friedman (no relation), chief fashion critic of the New York Times, that the word, and the phenomenon it describes, finally caught my attention. 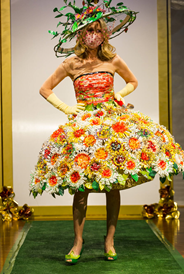 “Springtime Splendor,” by Margaret Hatcher, winner of the 2021 Trashion Fashion competition at the Sonoma (Califoirnia) Community Center. Not only did this event take place not far from where I live, and not only has the event been held for 12 (!) years, but I happen to know the model, Ligeia Polidora. I’m amazed, and a little embarrassed, that I’m so late to the game. Photo via Sonoma Index-Tribune.

From the Wikipedia entry on trashion:

The term was first coined in New Zealand in 2004 and gained in usage through 2005. Trashion is a subgenre of found object art, which is basically using objects that already have some other defined purpose, and turning it into art. In this case, trash is used.

Initially trashion was used to describe art-couture costume usually linked to contests or fashion shows; however, as recycling and 'green' fashion have become more prevalent, trashion has taken a turn for the more wearable. The term is now widely used in creative circles to describe any wearable item or accessory that is constructed using all or part materials recycled materials, including clothing that has been thrifted and reconditioned.

Vanessa Friedman herself wrote about trashion back in December 2019. Her article, “The Future Is Trashion,” was subtitled “We make too much and buy too much. But maybe there is a way not to waste too much. The ragpicker of Brooklyn has an idea.”

The ragpicker of Brooklyn, whose name is Daniel Silverstein and whose nom de style is Zero Waste Daniel, looks like a fashion kid, which he is (or was). He is 30 and tends to dress all in black, with a black knit cap on his head, and went to the Fashion Institute of Technology and interned at Carolina Herrera and even was on a fashion reality TV show.

“I prefer to think of it as Rumpelstiltskin, spinning straw into gold,” Mr. Silverstein said one day in early November. He was on West 35th Street, in the garment district, with his partner and husband, Mario DeMarco (also all in black). They were hauling home sacks of cuttings from their own production run at HD Fashion, which also makes clothes for Rag & Bone and Donna Karan’s Urban Zen line.

sweatshirts and pants and T-shirts, the occasional anorak, collaged together from rolls of old fabric, mostly black and gray, often containing brightly colored geometric patchwork inserts of smaller, brighter bits, like an exclamation point, or an Easter egg.

Silverstein’s clothing has found an audience in the likes of Lin-Manuel Miranda, who “wore a Zero Waste Daniel sweatshirt at an Amex event.”

Vanessa Friedman returned to Silverstein in her November 11, 2022, newsletter, sharing the news that the designer had entered into a partnership with thredUP, the used-clothing resale site:

Essentially, thredUP sent Mr. Silverstein 2,000 pounds of stuff it had been sent but couldn’t sell because it was irreparably stained, torn or homemade, and rather than throw it away, he … turned it into a holiday collection.

Specifically, bucket hats, bags, sweats, scarves, scrunchies and homewares, plus a few elaborate patchwork “collector’s coats.” Each piece, because it is composed of pieced-together swatches, is unique.

Not all trashion relies on fabric scraps; some trashistas upcycle materials such as microplastics and paper bags. And Sonoma isn’t the only U.S. city that encourages such stylish reuse: There also have been trashion shows on Bainbridge Island (Washington), and at MIT. There’s even a Trashion Co. brick-and-mortar store in Freehold, New Jersey.

Posted at 06:10 AM in Fashion, Portmanteaus, Word of the Week | Permalink