Word of the week: Longtermism

What do we mean when we talk about “the future”? Next year? The next election cycle? The next generation? Or do we stretch our imaginations to conceive of “the next 10,000 years,” as Stewart Brand did when he created the Long Now Foundation in 1996?

Brand’s foundation is dedicated to the principle of longtermism, a philosophy, as the British author Richard Fisher wrote in 2020, that “allows the mind to transcend the stresses of the present, and travel to other times. In times of difficulty, it tells you ‘this will pass’, providing perspective; in times of uncertainty, it can offer a set of secular guiding principles for navigating the world.” 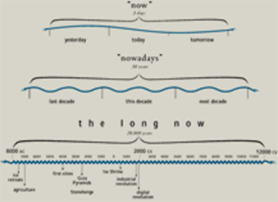 A visualization of “now,” “nowadays,” and “the long now” via the Long Now Foundation.

Here’s how William MacAskill, the 35-year-old Oxford professor and author, defines longtermism: It’s “the view that we should be doing much more than we currently are to protect the lives of future generations, and that positively impacting the long term is a key model priority.”

That’s the rosy outlook—one that has drawn enthusiastic support from the likes of Elon Musk (who’s floundering in his stewardship of Twitter but still wants to colonize Mars) and other billionaires. But there’s a darker side of longtermism that’s been attracting attention lately.

Longtermism, wrote Siva Vaidhyanathan in The Guardian last month, is

a muddled pseudo-philosophy … [that] exhibits complete faith in the ability of technological and financial elites like [Elon] Musk … to re-engineer humanity, transcend corporeal limits, embrace other planets as homes and destinations, and surrender autonomy to elites instead of people. It’s fundamentally anti-democratic and anti-humanistic.

“Longtermism” emerged out of the effective altruism movement, which developed in the US and the UK as “a project that aims to find the best ways to help others, and put them into practice.” (“Effective altruism’ was coined in 2011 as part of the name for the Oxford-based Centre for Effective Altruism.) So far, so good. Then things took a turn, as Sigal Samuel explained in a September 2022 article for Vox, “Effective Altruism’s Most Controversial Idea”:

[S]ome philosophers within the EA movement started emphasizing the idea that the best way to help the most people was to focus on humanity’s long-term future — the well-being of the many billions who have yet to be born. After all, if all lives are equally valuable no matter where they are, that can also extend to when they are.

Émile P. Torres put it even more strongly a few weeks ago in an article for Aeon, “Against Longtermism”:

Why do I think this ideology is so dangerous? The short answer is that elevating the fulfilment of humanity’s supposed potential above all else could nontrivially increase the probability that actual people – those alive today and in the near future – suffer extreme harms, even death. Consider that, as I noted elsewhere, the longtermist ideology inclines its adherents to take an insouciant attitude towards climate change. Why? Because even if climate change causes island nations to disappear, triggers mass migrations and kills millions of people, it probably isn’t going to compromise our longterm potential over the coming trillions of years. If one takes a cosmic view of the situation, even a climate catastrophe that cuts the human population by 75 per cent for the next two millennia will, in the grand scheme of things, be nothing more than a small blip – the equivalent of a 90-year-old man having stubbed his toe when he was two.

Then there’s the company longtermerism keeps: notably tech billionaires and anti-government libertarians like Musk and his former PayPal founder (and Trump supporter) Peter Thiel with the resources to escape the near-term consequences of climate change, pandemics, and so on. “To be even more cynical,” wrote Washington Post columnist Christine Emba in a September 2022 opinion piece, “longtermism seems tailor-made to allow tech, finance and philosophy elites to indulge their anti-humanistic tendencies while patting themselves on the back for their intelligence and superior IQs.”

A comment on Emba’s essay put it succinctly: “Not once in this article did the climate crisis come up. … Unless these schmucks put the money they've extracted from us into mitigating the impending disaster, there's no such thing as long term.”

More isms from the archives:

Posted at 05:46 AM in Isms, Philosophy, Technology, Word of the Week | Permalink

Economists have long differentiated the long run and the short run. John Maynard Keynes, perhaps runner-up to Galbraith in the bon mot race, famously wrote: "In the long run [or long term] we are all dead."

Because it was so widely misapplied, he later came to regret making the statement, despite its inherent truth.

“Longtermism” sounds suspiciously like some religions. Poor people putting their last pennies in a plate collected by a man in gold vestments. The promise of a wonderful afterlife.