Word of the week: It's giving

Yes, it’s Thanksgiving in the U.S. on November 24. And it’s GivingTuesday—”a global generosity movement unleashing the power of radical generosity”—on November 29. But I haven’t accidentally dropped Thanks or Tuesday. I’m talking instead about “It’s giving [X],” a linguistic happening of its own.

Ain’t no better holiday (Oh)
Everybody sayin’ that we made it (We made it, yeah-yeah)
Put that thing up on your wishlist (Oh)
It’s giving Christmas, oh, wow (Yeah)

Hear that? Giving isn’t modifying Christmas; it’s a participle that means something like “evoking” or “giving off a vibe.” (For more on “vibe,” see Ben Zimmer’s November 19 Word on the Street column for the Wall Street Journal.) Later in the song, Brown turns it around with the line “Christmas is giving,” a more familiar sentiment.

Or consider this poster for “It’s Giving Thanks Girl!”, a San Antonio event featuring drag performers Tundra Hall (a pun on the Tundra Haul rolling cooler) and Ira Descent (pronounced “iridescent”). There’s no comma after “thanks,” although the San Antonio Current seemed to think one was required. 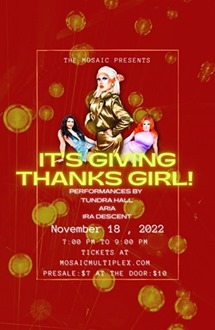 It’s giving Christmas: “Sure feels like Christmas around here.”

It’s giving thanks: “I believe I detect a spirit of gratitude.”

The phrase has been circulating for a few years, percolating up from the Black queer and trans communities. Know Your Meme says its precise origins are unknown; the earliest documented usage, so far, is a 2019 episode of Divorce Court in which Rolling Ray, a disabled gay rapper-slash-influencer, introduced himself to the judge by saying “It’s giving very much how you doing your honor Ms. Judge Lynn Towler.”

a slang term used to describe someone or something's look or vibe with a positive ironic connotation, derived from the phrase “giving X vibes.” For example, “It's giving rockstar” would positively describe someone as having a rockstar vibe.

The Urban Dictionary’s earliest definition, from March 23, 2020, is characteristically indefinite: “used before describing something or if used alone means serving like serving a look.”

it’s giving Christopher Walken and I love it. https://t.co/e3WwSuiQKs

“It’s giving shackled”—i.e., this job makes me feel like I’m in prison—is a subset unto itself.

On December 3, 2021, the Atlantic’s crossword-puzzle editor, Caleb Madison, used “it’s giving” in a puzzle* and then wrote a column explaining the choice:

As is the case with oodles of now-mainstream slang, It’s giving ___ filtered into the lexicon from ball culture, arising from sources like RuPaul’s Drag Race, Paris Is Burning, and Black Twitter. This is the same linguistic pathway that gave us yasss queen, serving realness, that’s tea, throwing shade, gagging, even legendary—phrases originating within queer communities of color, now freely used, for better or worse, by straight white people (and many others, of course) to give their language emphasis, dynamism, and play. …

It’s such a simple and evocative turn of phrase, and you can hear “____ vibes” or “big ___ energy” only so many times before you get sick of them, even used ironically. But in enshrining the phrase in a crossword, I wanted to pay tribute to its origins. That’s why I ended up going with the clue “Phrase from drag-ball culture that might introduce an energy reading.”

Still confused about how to use “It’s giving”? Here’s a visual from This Interests Me: 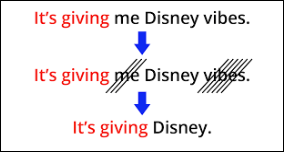 Want to give the gift of “It’s giving”? Earlier this year, rapper Doja Cat introduced a line of clothing and accessories under the brand name It’s Giving—but not without controversy. Remember Rolling Ray, the disabled rapper-influencer? He claims to have coined “it’s giving” in 2019, and accused Doja Cat of, well, taking it without permission. Read all about it.

* The Atlantic publishes a daily crossword. Madison didn’t link to the one he references, and I haven’t been able to find it.

Posted at 06:15 AM in Holidays, Memes, Slang, Twitter, Word of the Week | Permalink