Word of the week: Fediverse

Now that new Twitter generalissimo Elon Musk—or “Elmo,” as some people are Voldemorting him—has been, um, disrupting the joint, interest has spiked in alternate social-media platforms that aren’t dominated by egomaniacal billionaires with poor impulse control. Platforms like, for example, Mastodon, which launched in 2016 and which brands itself as “social networking that’s not for sale.”

Unlike Twitter, Mastodon isn’t a single platform but “a collection of different, independently-run and self-funded servers,” as Time magazine put it in a November 6 article. This decentralization is a characteristic of the fediverse, a portmanteau of “federated” and “universe.”

It’s beautiful in the #fediverse in the Mastodon federation of servers https://t.co/wROWW4Go1o

I’m going to come clean and admit I don’t fully grasp the fediverse concept. (I did set up a Mastodon account, or “instance,” about six months ago, but I never used it and now I can’t find it. That’s decentralization for you!) But I’ve been reading as much as I can about it, and I have the sense it’s going to be an important term to know, so I’m going to plunge ahead into the darkness. 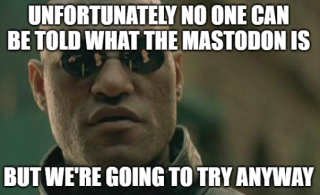 “Fediverse” was new to me, but the word and concept have been around since at least 2008. A site called Fediverse.party celebrates May 18 as the fediverse anniversary (fediversary?). The site’s About page gives this definition:

It is a common name for federated social networks running on free open software on a myriad of servers across the world. Historically, this term has included only microblogging platforms supporting a set of protocols called OStatus. With the wide adoption of a new standard protocol called ActivityPub, many new projects appeared. This guide unites all interconnected networks under one term.

A 2017 Mastodon guide, retrieved via the Wayback Machine, explains it this way:

“Federation” is essentially how instances are connected with and talk to one another. Think of it more like email clients rather than other social media sites: with email clients, it doesn't matter what site you use to make your account, because you can still email anyone else that has an email address. In the case of the “fediverse,” meaning the network of federated instances (including those from GNU Social, Friendica, Hubzilla, Diaspora, etc.), the instances are your email clients.

The “fediverse” portmanteau follows the example of “multiverse” (coined in 1895 by William James), “metaverse” (coined in 1992 by Neal Stephenson and popularized in 2021 by Mark Zuckerberg), and other “universe” compounds like Marvel Universe and Mirrorverse. “Federation” came into English in 1721 from French fédération; the Latin root, foedus (covenant, league), is related to words like “confide” and “fidelity.” “Federation” appears mostly in political contexts: The United States is the world’s oldest federation (Nepal is the newest, as of 2015); the Russian Federation was formed after the breakup of the Soviet Union in 1990.

But I’m willing to bet that the federation that inspired the coiner(s) of “fediverse” was Star Trek’s United Federation of Planets, commonly referred to as “the Federation.” A relevant passage from the Wikipedia entry:

The optimistic view of the future present in the Federation has been highlighted as unique among most science fiction, showing how “evolved” and “civilized” the future could conceivably be.

The fediverse may well be a beacon of civilization, too. But for now I’m staying on Twitter, munching popcorn as the Good Ship Elmo sails toward the iceberg.

Posted at 06:22 AM in Portmanteaus, Twitter, Web/Tech, Word of the Week | Permalink