Let the Word of the Year (WoTY) rumpus begin! Collins Dictionary, based in the UK, has already picked a winner: permacrisis, which I’d been unaware of until I read the announcement last week. (Definition: an extended period of instability and insecurity.) Collins is based in the UK, where the word may have greater currency; the British bias would also explain a couple of runners-up, Carolean (“relating to Charles III of Great Britain and Northern Ireland”) and partygate (a reference to former PM Boris Johnson’s flouting of pandemic restrictions).

But some of the words on the Collins list are more universal, including quiet quitting and a word I featured here in May, sportswashing. The choice that especially pleases me is splooting, “the act of lying flat on the stomach with the legs stretched out” to beat the heat, usually said of squirrels or dogs. The Collins entry says “sploot” may be derived from “splat”; here in the US of A, Merriam-Webster connects sploot to DoggoLingo, “which uses cute, deliberate misspellings and onomatopoeias like mlem, blep, smol, borf, and heckin to fawn over man’s best friend online,” and tracks its usage back to at least 2012. Grant Barrett and Martha Barnette, hosts of the A Way with Words podcast, discussed sploot in a 2018 episode 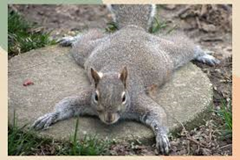 Meanwhile, American Speech, the journal of the American Dialect Society, has published the second half of the ADS’s 2021 words of the year, and I’m a contributor. (The issue is dated August 2022, but it took a few months to wend its way online.) My entry discusses TFG (‘the former guy”); it’s free to read here. (Requires a click to reach the PDF.)

I also contributed an entry, “the Big Lie,” to the first installment. Read it here.

Posted at 06:00 AM in British, Dictionaries, Word of the Year | Permalink

I think the emergence of "TFG" has been wonderful:
• It was used extemporaneously by plain-speaking Joe Biden, not known for being hyper-articulate.
• One can avoid mentioning Trump's name.
• It apparently infuriates Trump.