Word of the week: Fae

“Neopronoun with a nod to folklore”: That was the 28-Across clue in the September 23, 2022, New York Times crossword, and until I completed the fill I was stumped. 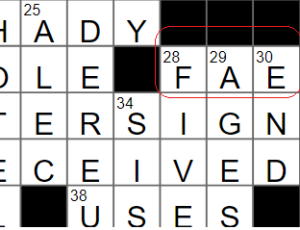 I was familiar with the term neopronoun: “a category of neologistic English third-person personal pronouns beyond ‘he,’ ‘she,’ ‘they,’ ‘one,’ and ‘it,’” according to a Wikipedia entry on the topic. I’d even read Dennis Baron’s 2020 book, What’s Your Pronoun? Beyond He and She, which includes a handy chart. 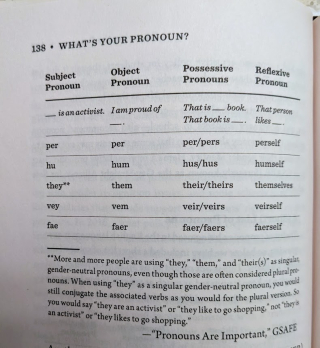 Fae and faer are down at the bottom. Baron does not explain their origin or significance, so I did some more research.

Fae and faer actually belong to a subset of neopronouns called noun-self pronouns, “in which an existing noun is drafted into use as a pronoun,” as a New York Times explainer, originally published in April 2021 and updated on September 18, 2022, puts it. The article continues:

(I have de-paywalled the full article for your reading pleasure. It was written by Ezra Marcus—sorry, I don’t know Ezra’s pronouns—and it’s really interesting.)

So there’s fae/faer/faeself again, still undefined. Here’s the story I dug up: It was derived from faerie, the old (originally Old French) spelling of fairy, a supernatural being that assumes human form. (The word comes from Latin fata, or fate.) The English spelling varied throughout the 1500s and eventually became standardized as fairy—that’s how Shakespeare spelled it—although the older spelling still appears now and then. The earliest use I found of fae as a neopronoun* (maybe the original use!) is in a December 21, 2013, post by “Eidolan” on the “Ask a Non-Binary” Tumblr. Note the use of vaer instead of faer.

Why did I choose fae/vaer as my pronouns?

Because I am fae. I am described as such by people who don’t know me — fae and feline and not-exactly-human. I do identify as faen, and in some ways angel as well, and fae and angel are the goals of my presentation. My choice of fae as a pronoun reflects this.

Using fae as a pronoun started out half a joke, a 1am offhand comment that fae would be one of the only things I could use as a pronoun and identify with. The next morning, it wasn’t so much a joke anymore, and by the end of the day my girlfriend and I had come up with how fae would work as a pronoun.

To address the point about fae as binary or not — it depends on your source material.
My personal view on this is that fae and fae creatures as stand outside the binary. They probably have some form of gender, but it’s most definitely not our human binary. Angels, on the other hand, are genderless. They have no sex and they have no gender. Together, fae and angels are the two sides of androgyny that are possible, and kind of form a secondary arc around the male/female binary: that of gendered/genderless.

…so in some ways, I’m using fae as a giant ‘fuck you’ to the gender binary and a refusal of much of the American culture surrounding gender. My gender is yes. Except when it’s no. Either way, it’s not male or female and using a pronoun that is very associated with creatures that stand outside humankind is, for me at least, a very good way to remind people of this constantly.

This wouldn’t be a discussion of pronouns if it didn’t include some rather heated arguments. You’d think there was already enough to be unhappy about without some people needing to complain that “using ‘fae’ as a neopronoun is culturally appropriative from pagan communities” (New York Times again). The Urban Dictionary entry for fae (pronoun) offers a funny dramatization of this complaint: “I’M LITERALLY PAGAN AND CELTIC SO I’M APPARENTLY APPROPRIATING MYSELF?! BUT YOU DIDN’T EVEN BOTHER TO ASK ME THAT BEFORE YOU CAME IN HERE WITH THIS BS!”

Well, the person or people at Gender Census—“the annual survey and results for people whose genders are not fully described by the binary”—took the complaint very seriously. You can read all about the GC research here; the tl;dr is: Celts and pagans mostly say that using fae is OK by them.

And thank you, New York Times Games, for igniting this little spark.

* There’s a 2007 Urban Dictionary entry for fae, but it’s for the noun. (“Faes are otherwise known as fairies.)

Posted at 05:00 AM in Grammar, Neologisms, Pronouns, Word of the Week | Permalink