« Word of the week: Hiatus | Main | Book review: Rebel with a Clause »

Miyake’s attention to names began with his own. He was born Miyake Kazunaru on April 22, 1938, in Hiroshima. (He endured the atomic bomb blast there seven years later and suffered from radiation-related illnesses the rest of his life; his mother died from her own radiation exposure.) According to the New York Times obituary, “the character for Kazunaru in Japanese also reads as Issey, which means one life.” Transliterated slightly differently, issei signifies “first generation,” as in a new immigrant from Japan to another country.

Miyake’s most widely recognized brand, and concept, is Pleats Please, which launched in 1988. Pleats Please clothes “are a product in themselves,” as the Miyake website puts it: “made with a unique ‘garment pleating’ technique where the materials are developed from a single thread and pleats are added after sewing the clothes into shape.” The pieces are “light and wrinkle-proof, they don’t need to be dry-cleaned, and they can be folded to a compact size for easy storage and carrying.” 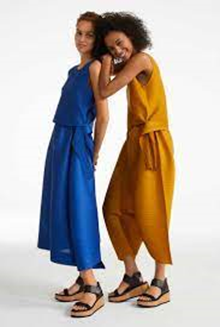 And the name? Pleats and please are near homophones, while please evokes the French word plissé, which is both an adjective meaning “pleated” and a noun meaning a type of closely pleated fabric. (The men’s counterpart to Pleats Please is called Homme Plissé.) 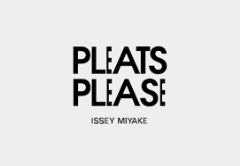 The ingenious wordmark suggests the intricate pleating and folding of the fabric.

Miyake also designed accessories, the most famous of which is his line of Bao Bao bags. In Chinese, bao bao has multiple meanings depending in part on tonality: “precious” or “treasure”; “steamed bun”; “small hill.” It’s also a colloquial term for “baby.” You may recognize “Bao Bao”—it rhymes with “now now”—as the name of a female giant panda who’s a star attraction at the National Zoo in Washington, DC.

But Miyake’s Bao Bao—a bag made from mesh covered with geometric polyvinyl tiles—began life three years before the panda was born, as an homage to a different language and continent. It debuted in 2010 as the Bilbao bag, a reference to the city in northern Spain that’s home to the Frank Gehry-designed Guggenheim Museum. A 2020 story in Departures gives the history of the bag but doesn’t explain why, or exactly when, the name was changed. 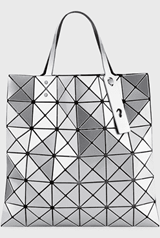 Here’s another multilingual Miyake creation: A-POC, officially an English-language acronym for “a piece of cloth.” But a French speaker could hear it as époque (epoch, era—think Belle Époque, the “golden age” of French history between 1871 and the outbreak of World War I). Introduced in 1998, A-POC really did herald a new era in clothing technology: According to the Miyake Design Studio website, “A-POC was revolutionary in that the process converted a single thread into a fabric with texture, shape and clothing based upon a computer concept of engineering design.”

More puns: the name of the L’Eau d’Issey fragrance can be read literally (“Issey water”) or, because of the French language’s gift for elision, as “L’odyssée” (the odyssey). And A Scent, another fragrance, is both baldly descriptive and—if you merge the two words—a suggestion of liftoff. (See my 2009 post about the A Scent name.)

And here’s a Miyake brand that works across multiple languages: HaaT (pronounced, roughly, “hot”) comes from (a) a Sanskrit word meaning “village market”; and (b) the Hindi word haath, which means “hands.” It’s also meant to connote “heart,” at least if you have a non-rhotic accent, which I for one do not. (Read my 2009 post about HaaT.)

Not every Issey Miyake brand relies on wordplay. The 132 5. brand, launched in 2010, takes its name from “the way a piece of cloth (‘1D’) takes on a three-dimensional shape (‘3D’) and is then folded into a flat surface (‘2D’), and the way that wearing it transforms it into a presence that transcends time and dimensions (‘5D’).” And the Cauliflower line is named for its dense texture, resembling the curd-like inflorescence of the plant. (The Japanese word for cauliflower, I learned while researching this post, is karifurawa—a transliteration of the English word. Are there no cauliflowers native to Japan?) 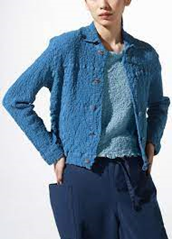 For more on Miyake, read an appreciation in the New York Times by Vanessa Friedman (no relation), which explains why Steve Jobs chose Issey Miyake mock turtleneck shirts as his uniform. This link will bypass the paywall.