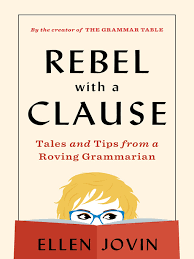 Here’s how it started: On September 21, 2018, Jovin left her Manhattan apartment with a folding table and a hand-lettered sign and set up shop near the 72nd Street subway station, waiting for someone with a grammar question to show up. She didn’t wait long. “That September day, it took me approximately thirty seconds to start getting visitors,” she writes. One of the first questions involved a misplaced apostrophe in a text message. Another person wanted to know the correct pronunciation of finance. (Jovin interprets “grammar” in its most elastic sense. She has settled spelling disputes, too, and she even weighs in on the merits of cursive writing.)

It wasn’t only opinionated New Yorkers who flocked to the Grammar Table. Accompanied by her husband, Brandt Johnson, Jovin took her show on the road, answering questions from Portland, Maine, to Venice Beach, California, before Covid put a temporary halt to the odyssey. Johnson shot video footage of the trip; it’s being edited into a documentary. 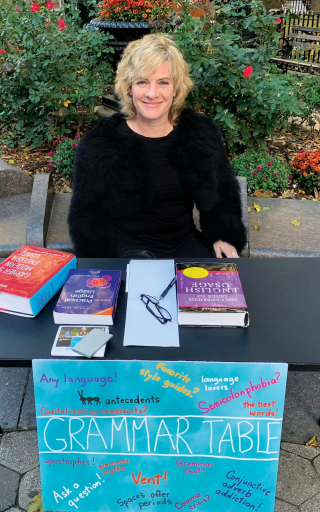 Before I read the book* I knew Ellen Jovin from Twitter, where she often posts grammar and usage polls that stimulate lively discussion. (Here’s one, about the past tense of text.) Her authorial voice is just as charming as her Twitter voice, and her accounts of her grammar conversations are often very funny.

As are her occasional illustrations: 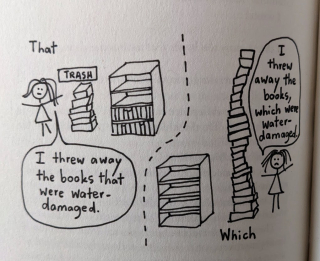 What’s the difference between that and which? One of Ellen Jovin’s drawings from Rebel with a Clause.

And her example sentences, like this one, which demonstrates a “list-free colon”:

Willard had just one life goal: to loiter languidly.

She even includes a little mnemonic verse of her own creation:

A dash
Is for panache,
A hyphen
Is more triflin’

She meets a “footnote fetishist” (a woman with a footnote tattooed on, yes, her foot) and shares a good language-y joke:

What did the thesaurus eat for breakfast?
Synonym rolls.

This is grammar instruction with the lightest, most engaging touch you’ve ever encountered. Rather than prescribe rules—“Mine is not the Grammar Judgment Table,” Jovin says in the introduction—she offers encouragement and reason. Do you insist on two spaces after a period—what Jovin calls “the mom jeans of punctuation”? You do you, but be advised that your habit will stigmatize you as an “older person.” (Or a lawyer, in my experience.) Were you taught never to end a sentence with a preposition? “That is a superstition about English,” Jovin politely informs a woman who learned that particular superstition from a nun. Up with it you need not put.

There’s some serious data** behind Jovin’s cheerful counsel, with end-of-chapter quizlets to reinforce the lessons and a solid bibliography and useful index to lend scholarly cred. If you’re genuinely stumped by lie vs. lay, affect vs. effect, passed vs. past, and you’re vs. your, Jovin can help without hectoring.

My one quibble with the book is its title, which is a little misleading. Jovin is no revolutionary; she’s a peacemaker and a cheerleader. So why “rebel”? No one asked me, but if they*** had, I’d have suggested something a little more upbeat: How about Revels with a Clause?

* Purchased with my own funds, in case you’re curious.

** Is data singular or plural? Jovin responds to Latin-root purists with this: “Origin is not destiny. We don’t necessarily import the same singular and plural noun formation practices across language lines.”

*** “My philosophy is that if you can write around it elegantly, go for it, but if you can’t, it’s fine.” – Ellen Jovin on singular they.

Posted at 09:39 AM in Books, Grammar, Punctuation, Spelling, Usage | Permalink