On the Visual Thesaurus: Gun idioms

Guns, as we know, are pervasive in American culture. Unsurprisingly, they also pervade our everyday language. For my July Visual Thesaurus column—my parting shot, so to speak, after 16 years—I explore some of the idioms and metaphors borrowed from firearms, from riding shotgun to bullet train to firing line.

As always, full access is limited to subscribers for three months. Here’s a free sample, and keep reading for an explanation of why this is my parting shot:

Following the June 24, 2022, US Supreme Court decision overturning federal abortion protections, some American states implemented trigger laws that limited or banned abortion within their jurisdictions. A trigger law is unenforceable when it’s passed, becoming enforceable only after one legal factor is changed, “triggering” the law’s implementation. A trigger warning is a statement that alerts a reader or viewer to the presence of content that may “trigger” distress; the term’s first published use, according to the OED, was in the title of a September 1993 Usenet group post: “possible movie trigger warning.” Trigger finger is a nickname for a medical condition in which a finger (or, frequently, thumb) becomes stuck in a bent position as though it were pulling on a gun’s trigger. The condition, also known as stenosing tenosynovitis, is caused by inflammation around the tendon in the affected finger.

Read the rest of Shoot! How Gun Idioms Color Our Speech.

Guns and gun-related lingo are also popular in branding. (In the column, I cover Quaker cereals’ long-running “shot from guns” ad campaign.) Here are a few examples of brand names borrowed from firearms: 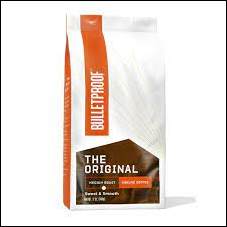 High-fat Bulletproof Coffee is the foundation of the “Bulletproof Diet” developed by self-described “biohacker” Dave Asprey. I haven’t found an explanation for the name, which perhaps is meant to suggest toughness and invulnerability. 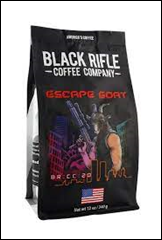 Black Rifle Coffee Company was founded by a former US Army Green Beret;. its mission is “to serve coffee and culture to people who love America.” Who else is thinking of that notorious Nazi quote: “When I hear the word culture I reach for my gun.” (It’s often misattributed to Goering or Himmler; it actually comes from a 1933 play written by Hanns Johst.) There’s a story on the Black Rifle website about “Escape Goat” medium roast coffee (a mis-hearing of “scapegoat”?), but I’ve read it twice and still can’t figure it out.

The Leadslingers whiskey brand was also founded by combat veterans; the distillery’s cinnamon-flavored product is unsubtly and unpleasantly called “Napalm.” All of the web copy IS IN ALL CAPITAL LETTERS, which made me instinctively cover my ears and wonder about the wisdom of mixing alcohol and firearms. There’s a lot of this sort of thing:

BUILDING UPON THEIR DEEP DEDICATION TO BRING UNIQUE PRODUCTS TO THE VETERAN AND SECOND AMENDMENT COMMUNITIES, THE CALL TO MAKE A WHISKEY AS BOLD AS AMERICA WAS HEARD LIKE AN EAGLE’S SCREAM. THIS IS A STORY ABOUT SEIZING OPPORTUNITY WHEN LIFE THROWS IT AT YOU, WHILE NEVER FORGETTING WHERE YOU CAME FROM. THIS IS A STORY ABOUT MEN WHO PURSUE EXCELLENCE. IT’S ABOUT FREEDOM. IT’S ABOUT RAISING A GLASS TO TRADITION, BUT ALSO RAISING THE BAR OF PERFORMANCE. THIS IS THE STORY OF AMERICA, ENCAPSULATED IN THE STORY OF SEVEN MEN WITH A VISION.

And on and on.

God’s Trigger is a video game in which players “slay enemies with speed and precision in an over-the-top show of blood and explosions.”

I’d been anticipating the end of the road for my Visual Thesaurus column ever since VT’s parent company, Thinkmap, was acquired by IXL Learning, which focuses on K-12 education. The other shoe fell on June 23, when I received an email from my contact at VT letting me know that “the article feature on Visual Thesaurus will be phased out after July and we will no longer utilize freelance writing services.” So that’s -30- for me and my fellow contributors Orin Hargraves, Mark Peters, and Daphne Gray-Grant. Our content will remain archived on the site indefinitely; you can read all of my columns (except the still-paywalled ones) here.

I’ve been writing a monthly column for the Visual Thesaurus for almost 16 years, and I’m sad to lose this opportunity to write for adult language-lovers. The highlight of my tenure was the period during which the brilliant and astute Ben Zimmer was my editor—what a privilege! Ben now writes the Wall Street Journal’s Word on the Street column, among many other interesting wordly pursuits.

I’ll keep writing here, and I’m looking at a couple of potential new (paid!) writing opportunities. I welcome your recommendations as well.