« Ambiguity for the win: When two meanings are better than one | Main | Bye-bye, DALLE mini. Hello, craiyon (sic). »

My article on "the Big Lie" is now in "American Speech"

My short article about Big Lie for American Speech, the journal of the American Dialect Society, is now available online. You can read it by clicking the “PDF” button here.

The entry appears in the “Among the New Words” section, edited by Ben Zimmer, Kelly E. Wright, Brianne Hughes, and Charles E. Carson. This quarter’s new words were drawn from the nominations for 2021 Word of the Year, held January 7, 2022, via Zoom. (The overall winner was insurrection.)

The issue is dated May 2022, but the print edition was delivered in June and the online version was posted within the last couple of weeks. (For a while I was checking every day, but then I slacked off and voilà—there it was.)

My thanks to Ben Zimmer for inviting me to contribute—it’s my first-ever publication in an academic journal! I’ll have another entry in the August issue; I’ll let you know when it appears online.

Read the full Among the New Words article, which includes antiwork, no bones day, -core, and other noteworthy additions to the lexicon. (Read my Visual Thesaurus column on -core.)

Blog bonus! There are at least six books with the “Big Lie” title. (Remember: titles are not subject to copyright protection.) A couple of them are about the recent unpleasantness, but the phrase is flexible enough to cover many eras and mendacities.

The Big Lie: Election Chaos, Political Opportunism, and the State of American Politics after 2020, by Jonathan Lemire (July 2022)

Battling the Big Lie: How Fox, Facebook, and the MAGA Media Are Destroying America, by Dan Pfeiffer (June 2022)

The Big Lie, “a gripping novel set in present-day England under a Nazi regime,” by Julie Mayhew (2017)

The Big Lie: Motherhood, Feminism, and the Reality of the Biological Clock, by Tanya Selvaratnam (2014)

The Big Lie: A True Story, a Holocaust survivor’s tale by Isabella Leitner (1994)

And a new scripted podcast series, also titled “The Big Lie,” follows an FBI agent (Jon Hamm) trying to shut down production of Salt of the Earth, the only movie subjected to the Hollywood Blacklist in the 1950s. Listen to the podcast on Audible. Read about Salt of the Earth (1954). 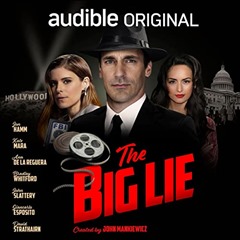 Posted at 09:25 AM in Books, Politics, Shameless Self-Promotion, Titles, Word of the Year, Words, Writing | Permalink