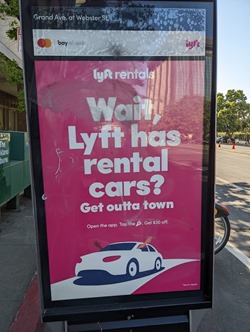 The three words in the second deck have a playful twist. Get outta town is a slangy expression of disbelief: What, really? No way! And you can use a rental car to literally get out of town. “Wanna talk trash? We can take it!”

To talk trash is to say insulting things about an opponent, but this receptacle is talking about trash. We can take it also has a double meaning: “We don’t mind the insults” and “We can accept that wad of fast-food wrappers you were about to toss into the gutter.” 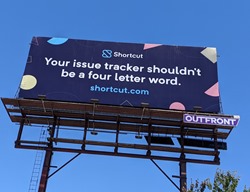 “Your issue tracker shouldn’t be a four letter word.”

Issue-tracking software like Shortcut’s follows bugs or customer-service problems from report to resolution. Shortcut wants you to know their product won’t cause you to curse (utter a four-letter word*). And since one of Shortcut’s competitors is a company called Jira—a four-letter name—the ad is also telling you where not to spend your money. 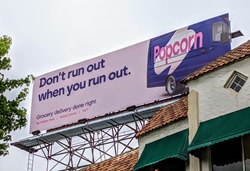 A billboard from grocery-delivery service Popcorn plays on two meanings of run out: to leave the house to perform an errand and to come to the end of a resource.

I received an email with this subject line—“The blouse: minimal appeal”—on June 24 from COS**, a sub-brand of the H&M Group that boasts of selling “essentials for the modern wardrobe.” I see a problem with minimal, which has two meanings: “least possible amount” (minimal effort) and, when capitalized, “related to the artistic movement known as Minimalism.” Sometimes minimal has positive overtones, as in “minimal loss of life.” But a blouse with “minimal appeal” has almost no appeal at all. What’s wanted instead, I’m guessing, is minimalist, which unambiguously means “the fewest elements with the greatest impact.” I’ll leave it to you to judge the appeal of the blouses in question, which are also described as “easy, breezy.”

* Yes, “four-letter” should have a hyphen. It’s a compound modifier.

** Why all caps? Because it’s an acronym: Collection Of Style.

Posted at 06:11 AM in Advertising, Signs, Slang | Permalink