« On the Visual Thesaurus: Locker-room talk | Main | Name in the wild: Lurline » 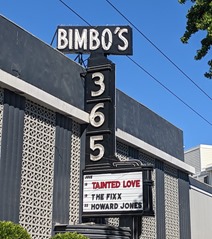 Bimbo’s 365 Club, San Francisco. The club opened in 1931 at 365 Market Street; it moved to its current location at 1025 Columbus Avenue in 1951 but kept the original numerals in the name.

In Italian, bimbo is a truncation of bambino (“baby”). The -o suffix tells us it’s masculine; the corresponding feminine term is bimba, short for bambina. In the original language, it’s a term of endearment for infants and children; it’s also used, sometimes ironically, for adult men.

That etymology explains the name of Bimbo’s 365 Club, a San Francisco institution for more than 90 years. (A young Rita Cansino—later to be transformed into movie star Rita Hayworth—danced in the chorus there.) Here’s how the club’s website tells the story:

Agostino Giuntoli left Tuscany, Italy in 1922 at the age of 19 and sailed to America. He spent five years working his way to San Francisco and found a job as janitor at the famed Palace Hotel. From there he became a cook at a nearby establishment where his boss, Monk Young, was unable to pronounce his name and dubbed him “Bimbo”, the Italian word for boy. The name stuck for good.

Bimbo was used broadly in the U.S. to mean “fellow”; the earliest citation in the Random House Historical Dictionary of American Slang (HDAS), from 1918, is a crude rendering of “dialect”: “She flop! An’ il bimbo, he break da boni.” It gradually took on the sense of “stupid, inconsequential, or contemptible fellow,” and could still refer to a man as late as the 1990s. “I think [Vice President Dan] Quayle is the stereotypical bimbo,” someone said on Donahue in 1990.

But alongside this meaning another one soon gained currency: a young woman, originally a glamorous or attractive one, and eventually “one who is promiscuous or unintelligent,” according to HDAS. A Variety staffer named Jack Conway is credited with popularizing the female sense of bimbo in the 1920s. (For more Variety-isms, see my 2008 post, “Boffo at the B.O.”) One etymology dictionary says U.S. political sex scandals of the 1980s (which ones?) were responsible for resurrecting bimbo and inspiring derivatives such as bimbette and the deservedly obscure himbo. 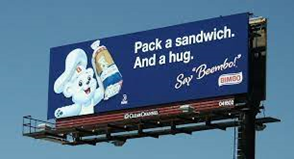 Bimbo Bakeries USA, the largest bakery company in the US, owns Entenmann’s, Sara Lee, and Thomas’, as well as Bimbo branded products. Parent company Grupo Bimbo was founded in Mexico City in 1945, taking its name from a portmanteau of two Disney films beloved by the founder’s daughter: Bambi and Dumbo. In 2010, Bimbo Bakeries USA launched an ad campaign to overcome the name’s “airhead” association, taking out billboards with a pronunciation guide: “Say ‘Beembo’!”

(The OED has another entry for bimbo: a British business acronym for “buy-in management buy-out”: “the purchase of (a controlling share in) a company by one or more outside managers in partnership with the company's existing management.” The dictionary’s earliest citation is from 1991.)

Here’s my bimbo story. Around 20 years ago I served on the board of a Bay Area professional-women’s group. Some big event was on our calendar, and we were looking for a suitable venue. One candidate that checked all the boxes was Bimbo’s 365 Club. It sounded swell to me, but not to one board member, who was appalled that we’d even consider associating that name with our eminently respectable organization We found another, completely forgettable place to hold the event. Today, the professional organization is defunct. But Bimbo’s 365 Club survives and thrives.

Posted at 06:15 AM in Italian, Naming, San Francisco, Women, Word of the Week | Permalink

Bimbo was a finalist for the name of the mascot of the 1990 FIFA World Cup in Italy. Local fans voted instead for Ciao. Dunno if the English sense influenced many voters.

Bimbo is also a city in the Central African Republic, just southwest of the capital, Bangui. I believe I once got lost there while driving about.

About 30 years ago a friend returned from a trip to Italy and reported his amusement at a car decal (rear window) "Bimbo a bordo." I think it was right around the time "baby on board" was popular in the states.