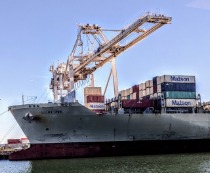 A total of six Matson-owned vessels have borne the Lurline name. The first, a brigantine acquired by William Matson in 1887, carried plantation supplies and merchandise to Hawaii. The second Lurline, which launched in 1908, could carry 51 passengers as well as freight; it marked the company’s pivot to tourism. The most famous Lurline, “the Queen of the Pacific,” was a luxury liner christened in July 1932 by its namesake, Lurline Matson Roth, in Quincy, Massachusetts, and then made its way through the Panama Canal to San Francisco, where the Matsons owned a house. For the next 30 years—with the exception of the war years, when it carried troops and supplies—it was the first choice of leisure-loving travelers making the voyage to America’s 50th state. 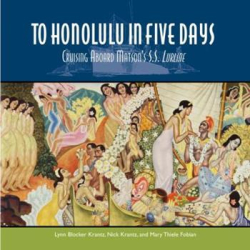 To Honolulu in Five Days: Cruising Aboard Matson’s S.S. Lurline (2000)

Later, when the war was over, there was another Hawaii, a big rock candy mountain in the Pacific which presented itself to me in newspaper photographs of well-fed Lincoln-Mercury dealers relaxing beside an outrigger at the Royal Hawaiian Hotel or disembarking en famille from the Lurline, a Hawaii where older cousins might spend winter vacations learning to surfboard (for that it is what it was called in those simpler days, surfboarding, and it was peculiar to Hawaii)… 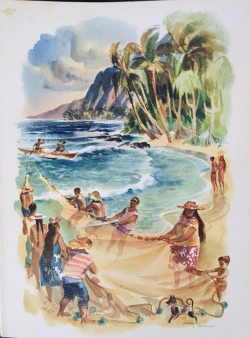 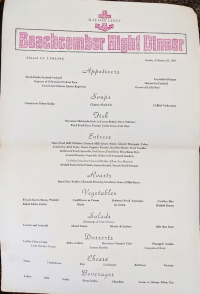 “Let’s all go to Hawaii!” The tango music here cracks me up.

The mainland-to-Hawaii crossings ended in 1963 with the advent of cheap air travel. Lurline was sold to a Greek company, Chandris Lines, in 1970 and renamed Britanis Ellinis.

But that wasn’t the end of the Lurline story. In January 2020, the container ship Lurline—the one I saw in Oakland—was launched in Honolulu. The new ship is the largest roll-on roll-off container ship (“ConRo”) built in the US., with room for 500 vehicles on board.

So what is it about the Lurline name that’s so, well, alluring?

The very first Lurline wasn’t a ship; it was a yacht. Its owner was Claus “Gus” Spreckels, a German immigrant to California who would found the Spreckels Sugar Company in 1896. In the 1870s, when he was a mere railroad tycoon, he bought the yacht, christened it Lurline, and invited his friend William Matson to be its skipper.

“Lurline”—pronounced loor-leen—is a variation of “Lorelei,” the name of the siren in German tale who lures sailors to their doom; it’s also the name of the rock in the Rhine River on which she perches. (This would seem an inauspicious name for a sailing vessel, but so it goes.) Despite the surface resemblance, “Lurline” isn’t related to English “lure”; Lorelei comes from a German root meaning “murmur” and a Celtic word, ley, that means “slate rock.”

The Lorelei legend was popularized by Heinrich Heine, who published his poem Die Lorelei in 1824. Thirty-six years later, a three-act romantic opera based on the Lorelei legend and titled Lurline, by the English composer William Vincent Wallace, premiered at London’s Covent Garden. It was a big hit, and continued to be performed through at least 1890. (“Hasn’t really stood the test of time” is how a 2010 Gramophone review caustically sums it up.)

So “Lurline” was in the air, so to speak, by the time the two future magnates met on Spreckels’s yacht. In a reversal of the usual order of things, Spreckels named his daughter, Lurline Elizabeth (1886–1969), after his boat. (Her older brother, John D. Spreckels, would eventually name his own yacht Lurline.) According to a popular (and probably false) story, William Matson met his third wife, Lillie Low, in 1888 aboard Spreckels’s yacht; they married the following year, and when their daughter was born in 1890 they named her Lurline after the yacht on which they allegedly met. 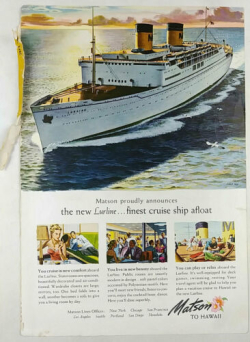 Posted at 05:50 AM in History, In the Wild, Naming, Transportation | Permalink

Darn it . . . didn't come here just to offer a correction: I thoroughly enjoyed the history. My paternal grandparents went to Hawai'i in the winter of 1956 or '57, probably aboard Lurline.

If the pronunciation matters as much as or more than the spelling, I can't help remembering Alabama governor George ("Segregation now....") Wallace's first wife, Lurleen.

Stephen: That correction is so embarrassing I can't bring myself to mention it. I quickly made the change and hope no one else noticed it.