« One ad line to rule them all | Main | On the Visual Thesaurus: Understanding 'Maven' »

As Robyn Pennacchia wrote for Wonkette on May 13, the language changes did not emerge from focus groups—in contrast to, say, the Republican strategist Frank Luntz’s “Language for the 21st Century” (1997), which advised GOP politicians to say “death tax” instead of “estate tax,” among other things.

Rather, many of them are changes that have been asked for and encouraged by actual abortion rights and access activists for a long time now, working within a reproductive justice framework and geared towards destigmatizing abortion and addressing the realities of today rather than those of 1973.

Here, for example, is how the Planned Parenthood Advocacy Fund of Massachusetts put it in a February 2021 blog post:

The language of “choice” centers one person’s decision to get an abortion or not; a choice is something one person makes. Focusing on someone’s “choice” erases the structural, societal factors that determine how and if someone can get health care, and the quality of that care. These factors are not incidental or insignificant: they leave many people with no choices at all..

“Choice” assumes that everyone can get an abortion, and someone just has to choose whether or not they want one. Not everyone can get an abortion when they want one. Black feminists and feminists of color have pointed out that this isn’t the case: the legal right to choose to have an abortion does not always mean someone can actually get an abortion. “Choice” ignores the lived realities of people, especially Black people and people of color, who face barriers that are often compounded by racist and classist policies that keep them from the care they need.

Decision, Pennacchia writes, “has a certain amount of gravity and finality that choice doesn’t necessarily have, and is more consistent with the view of abortion as a health care issue. It also includes the many people who have abortions not because they want to, but for their own health or because of a fatal foetal abnormality.” 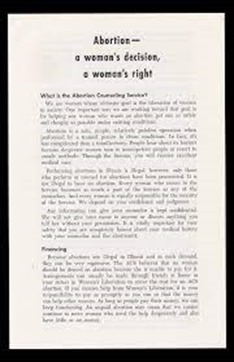 “Abortion—a woman’s decision, a woman’s right”: an undated pamphlet distributed by the Chicago-based Abortion Counseling Service, also known as Jane, which operated illegally between 1969 and 1973. Via Vanity Fair.

Choice and decision are often listed as synonyms in dictionaries and thesauruses, but the words are not always interchangeable. A court of law, for example, hands down a decision, not a choice. A menu offers many choices, but you end up making just one decision about what to eat.

The reason for these nuances is at least partly etymological. Choice is the older word; since around 1300, it has signified “the action of selecting.” Choice (or chois, the original spelling) comes to us from French choisir, “to choose,” and shares a distant relative in Old English ceosan “to choose, taste, try, distinguish, perceive.” (UPDATE: I have amended the previous sentence to clarify the etymology.) Choice is also an adjective meaning “worthy of being chosen.”

Decision—“the act of deciding”—entered English from French in the mid-1400s; its Latin source, decisionem, literally means “to cut off.” The -cision element also appears in precision and incision and in Cision, the name of a global public-relations-software company. When I wrote about Cision in 2007 I said that the name “feels like the sharp blades of a scissors (a word that’s a linguistic cousin).” A decision cuts off the process of weighing and comparing alternatives.

In 21st-century America, choice is, for better and for worse, shaded by its use in marketing and branding. As I wrote in 2010, “In brand messages, choice is always a good thing, even though much of the time we consumers feel overwhelmed by choices — or don’t feel we have one at all.” The flight attendant chirps, “We know you have a choice when you fly!”, but what we really have, most of the time, is a decision made with a sigh of resignation. Because it’s so often linked to consumerism, choice can seem a trivializing word. We choose one brand of soap over another. What we do with our bodies is more existential. 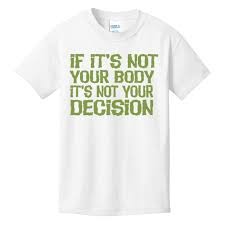 “If It’s Not Your Body It’s Not Your Decision”: T-shirt from Tee Shirt Palace. Green—“a symbol of hope, health, life”— has been adopted as the color of abortion-rights advocacy.

Pro-choice—the slogan of abortion-rights advocacy—was, from the start, a compromise. Annalisa Merreli wrote for Quartz in January 2017 about its origins:

Linda Greenhouse and Reva B. Siegel, authors of Before Roe v. Wade: Voices that Shaped the Abortion Debate Before the Supreme Court’s Ruling, say the framing around choice was introduced by Jimmye Kimmey, the director of Association for the Study of Abortion (ASA), who in 1972 wrote a memo (pdf, p. 50) emphasizing the need “to find a phrase to counter the Right to Life slogan.” Some options Kimmey floated in the memo were “Right to Choose” and “Freedom of Conscience.” She didn’t really like either, but did say the concept of choice was preferable to that of conscience: “a woman’s conscience,” she wrote, “may well tell her abortion is wrong, but she may choose (and must have the right to choose) to have one anyway for compelling practical reasons.”

Pro-decision is unlikely to replace pro-choice. But decision is already making inroads in the discourse around abortion. In a May 3 tweet, Vice President Kamala Harris warned that “If the right to privacy is weakened, every person could face a future in which the government can potentially interfere in the personal decisions you make about your life.”

Harris’s tweet points to one way abortion-rights language could become more effective, even (or especially) in a post-Roe world. As Helen Lewis observes in “How to Win the Abortion Argument,” published in The Atlantic on May 5, “right to privacy” and “government interference” are conservative talking points crafted to appeal to “the other side.” Or consider Ireland, as Lewis does: a Catholic-majority country that in 2018 repealed one of the most punitive abortion laws in the Western Hemisphere. Look at the photo above Lewis’s story. There are no “choice” or “decision” slogans, and no personal pronouns; instead, we see an emphasis on “Yes” (an affirmative vote to repeal the law) and on “Free Safe Legal.” (“Free” won’t happen in the US, but still.)

For an even more dramatic example, consider Poland, which since 2020 has had a near-total ban on abortions—and a groundswell of protest in response. One of the protesters’ main slogans, wrote Agnieszka Wądołowska in October 2020, is “Wypierdalać.” It translates to “Fuck off.”

Posted at 05:50 AM in Current Affairs, Law, Politics, Slogans and Taglines, Women, Word of the Week | Permalink