Exhibit A: a transit ad for ClickUp, a San Diego-based company that makes a project-management app. I originally saw the ad on a billboard adjacent to westbound I-80, between the Fremont Street and Fifth Street exits from the Bay Bridge. “One app to replace them all”

Exhibit B: a billboard for JumpCloud, which sells “streamlined secure user lifecycle management,” the meaning of which I can just barely puzzle out. The company is based in Colorado; this billboard is currently positioned about half a mile from ClickUp’s Bay Bridge ad. Apologies for cutting off the company name; I couldn’t get a shot from my car, and every street angle I tried was obstructed. 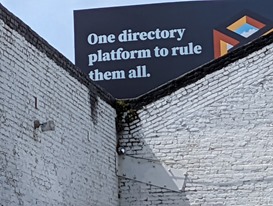 In case you’re not getting the reference, it’s from Lord of the Rings: “One Ring to rule them all, One Ring to find them, One Ring to bring them all and in the darkness bind them.”

If you’re writing these ads, or are the target market for these ads, chances are high that you’ve read Lord of the Rings more than once and probably own copies of the whole film franchise. For a certain demographic, LotR is that kind of touchstone. (There’s a fan wiki called The One Wiki to Rule Them All.)

Here’s the problem with using a well-known literary phrase in your ad: It’s all anyone will remember. Not your company name—which, in both these cases, is not strong to begin with. (I kept getting ClickUp and JumpCloud confused, and still haven’t figured out what those binomials signify.) To rule them all? To replace them all? Who knows?

My advice to the copywriters: Put away childish things and fictional rings and do some actual brand positioning and creative work. Maybe you’ll discover the real treasure: a distinctive, effective message.

Previously in Seeing Double: “…said no one ever (again).”

Posted at 06:00 AM in Advertising, Books, Redundancy, Sloganclones, Slogans and Taglines, Web/Tech | Permalink

I agree about the lack of "a distinctive, effective message", and they've failed on another count as well. This message isn't customer-focused, it's 2022 version of Mine's Bigger Than Yours, Yours being the competition. "Ruling", or the slightly less boastful "replacing" doesn't connect whatsoever to why I should buy their services.

Along those lines, I've never read the books or watched the movies. So that choice of phrasing would never connect with me. It does make we wonder whether they've done market research that suggests that the majority of people in their target audience ARE fans of that series.