Blog bonus 1: Here’s a sampling of the 290 (to date) live trademarks and trademark applications for MAVEN in the US Patent and Trademark database (there are also a handful of registered trademarks for alternate spellings): Vapor Maven, Cannabis Maven, Maven Hotel, Legal Maven, Midwest Maven, Everymaven, Franchisemaven, Maven Jiu-Jitsu Academy, Maven Cosmetics, Brow Maven, Marshmallow Maven, Raven the Science Maven, Death Maven. (Death Maven is a patient-advocacy group that mediates “disputes regarding elders, their families, caregivers and stakeholders.” It’s not to be confused with The Death Mavens, which provides “a variety of safe places to explore death.”) The oldest live trademark in the database is for The Mah Jongg Maven (in use since 1998, registered since 2003), which makes sense: the Chinese tile game mah jongg has been popular among Jews, and especially Jewish women, for almost a century. 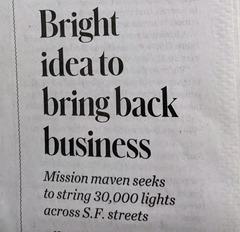 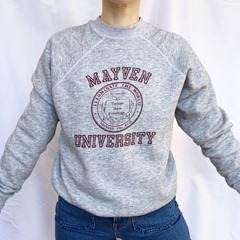 A spoofy “Mayven University” sweatshirt from the 1980s, listed on the resale site Poshmark. The slogans inside the “seal” bespeak the “know-it-all” sense of “mayven/maven”: “Opinion Above Knowledge,” “Illuminate the World,” “Listen to Me.” (I used to own this sweatshirt! OK, not this one, but a sweatshirt of identical design, and I am so, so sorry I gave it away.)

The Namerology blog identifies “Maevynn” as a female baby name that made its first appearance in the US in 2021, when it was given to five or more babies: “America has fully embraced the classic Irish name Maeve: its popularity has risen by 350% over the past decade. And like a hit song, a hit name inspires remixes.”

Related, Yiddishly: I wrote in 2009 about Zafgen, an obesity drug whose name is derived from the Yiddish adjective zaftig, which translates to “plump.”