Fifty years ago this month, seven Chicago-area women were arrested and jailed on eleven counts of performing abortions and “conspiracy to commit abortion.“ They were members of a clandestine feminist network known as “Jane” that, for four years before Roe v. Wade legalized abortion in the US, helped women terminate their pregnancies. Their story—more relevant than ever, now that Roe’s protections are in imminent peril—is told in a new documentary, The Janes, that will premiere on HBO on June 8. But The Janes isn’t the first telling of the story. In 1995, a former Jane member, Laura Kaplan, published a history of the group, The Story of Jane: The Legendary Feminist Abortion Service. I read it a couple of weeks ago and recommend it to you. (I found it in my local public library.) Here’s a passage that could have been written today: “Women are being reduced, once again, to the incubators of future generations with total responsibility but no power. That is the same oppressive view that the women’s movement sought to challenge. It is not just abortion, but women’s power to control their destinies that is at stake.” 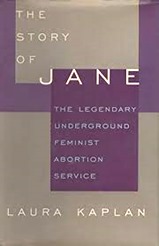 Related: My post about “choice.” And here’s Clyde Haberman’s 2018 “Retro Report” for the New York Times about Jane’s work in Chicago. Link has been de-paywalled.

Speaking of abortion and how we speak about it, Helen Lewis writes in The Atlantic about a “Great Unwomening,” the erasure of women from pro-abortion discussions:

The word women has been purged from the front page of the NARAL website, while the Lilith Fund helps “people who need abortions in Texas.” … Fund Texas Women has been renamed Fund Texas Choice. The National Abortion Federation’s response to the Supreme Court leak noted that it will “keep fighting until every person, no matter where we live, how much money we make, or what we look like, has the freedom to make our own decisions about our lives, our bodies, and futures.”

James Fallows—always worth reading—on the empty rituals of a gun massacre.

My posts about ammosexuals and gundamentalists seem, unfortunately, to be evergreen.

Budweiser is introducing “Freedom” packaging for the summer beer-swigging season, but some industry experts aren’t standing up and saluting. AdAge reports: “In today’s fraught political environment … the word ‘freedom’ has become loaded with uncomfortable subtext, recalling everything from mask controversies to the Roe v. Wade Supreme Court leak, and become a symbol instead of struggle and division.” (I wrote in 2016 about Budweiser’s seasonal “America” rebranding.) 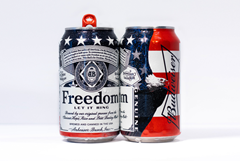 I’ve been enjoying Tagline, a podcast from about memorable ads and how they’re made. Created and hosted by Tim Nudd, the former creative editor of Adweek, the show features interviews with creative directors, copywriters, and account managers who reveal the behind-the-scenes work that resulted in Dove’s poignant “Real Beauty Sketches,” Sandy Hook Promise’s chilling “I Know the Signs”—ever relevant, sadly—and other spots and campaigns. One thing that’s struck me is how international the ad agencies’ teams have become. Tide’s 2018 Super Bowl spots, for example, used the creative talents of Ogilvy employees and subcontractors from Peru, Argentina, Italy, Brazil, and Sweden, as well as the US.

How did “Tar Heels” become the nickname for North Carolinians? Folklore researcher Bonnie Taylor-Blake gets to the sticky bottom of it..

R.I.P. the iPod (October 2001–May 2022). Long live “podcasting,” a portmanteau of “iPod” and “broadcasting.” It might have been “netcasting” or “blogcasting,” writes John Gruber. And no, “pod” was never an acronym for “play on demand.” “You know, naming things is really hard.” From The Outlaws, episode 4, streaming on Amazon Prime. Yes, I’m a little late to this series, a seriocomic crime thriller set in Bristol, UK, and co-starring Christopher Walken.

Ben Yagoda remembers Roger Angell, the New Yorker baseball reporter and editor who died May 20 at age 101. Don’t miss the treat at the very end.

A reminder that my February column for the Visual Thesaurus, about the language of vegan substitutes for animal products, has been released from paywall. But you can’t give me “stars” or leave a comment unless you’re a subscriber, hint hint.

And some administrivia: I’m stepping away from the blog for a week or two. I may still pop up now and then on Twitter and Instagram, and I’ll have a new Visual Thesaurus column on June 16.