« Who's the audience for this ad? | Main | On the Visual Thesaurus: Street names » 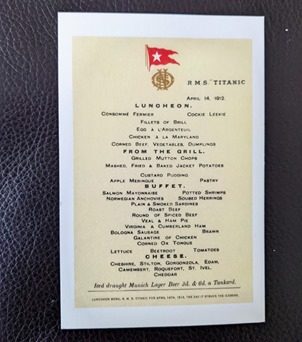 It turns out that soused herring is just pickled herring by another name. (Or, in Scotland, Ireland, and Wales, marinated herring that’s cooked and served cold.) Since pickled is yet another slang synonym for “drunk,” that would explain soused’s slang sense, too.

But souse has other secrets. The verb first appeared in print in the late 1300s, imported from French souser, which meant “to preserve in salt and vinegar.” The sous element doesn’t mean “under,” as it does in modern French, but rather “salt.” (There’s a related word in Old High German, salza, that means “brine.”) It’s conjectured that there was a Proto-Indo-European root sal- that meant—you guessed it—“salt.”

Other etymological branches from that sal- root gave us sauce (a salty liquid). sausage (meat prepared by salting), salad (a cold dish seasoned with salt), and salary (from Latin salarium, a sum paid to Roman soldiers for the purchase of salt, which was rare and coveted).

Then there’s souse, a type of head cheese (which is not a dairy cheese!) popular in Pennsylvania Dutch country and, apparently, elsewhere. Neese Country Sausage is in Greensboro, North Carolina. 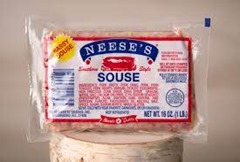 By the way, an original April 14 luncheon menu from the Titanic was auctioned off for $88,000 in 2015. A story in Cleveland.com covered the event and explained some of the more obscure items (to Americans, anyway) on the menu.

Tangent: I’m fairly certain that the first time I heard “souse” in an alcoholic context was when I was taught the University of California drinking song by the older sister of a high school friend. I can still sing it.

Drink, drank, drunk last night,
Drunk the night before;
And I’m gonna get drunk tonight
Like I never got drunk before;
For when I’m blitzed, I’m as happy as can be
For I am member of the Souse family.
Now the Souse family is the best family
That ever came over from old Germany.
There’s the Highland Dutch, and the Lowland Dutch,
The Rotterdam Dutch, and the Irish.

The song is an equal opportunity employer, offensiveness-wise. I can’t believe it’s still being sung, but here we are.

* A Night to Remember (1958) is more historically accurate and IMO a far superior movie.

Posted at 06:00 AM in British, Food and Drink, German, History, Word of the Week | Permalink

“And you don’t see brawn on any menus these days; in fact, I had to look up its culinary meaning. (“Fleshy part of a boar’s leg”; from Old French braon.)”

I think ‘fleshy part of a boar’s leg’ is a rather older sense; by the time of the Titanic, “brawn” would have referred to head cheese.

There's the 1940 movie "The Bank Dick", starring W.C. Fields as Egbert Sousè, an alcoholic bank guard. Characters in the film call him "Mr. Souse." He corrects them, "That's Sousè, accent grave over the 'e.'" I'm not sure about this, but he may mean, "accent aigu."

Brawn ;A tasty, economical terrine made from the meat of a boiled pig’s head. Common in the 1950s and 1960s in Northern England.

I have an antique a cast iron head cheese mold, like this one, which I use for baking breads and cakes. It came from Ohio. Years ago, some friends asked if I would make their wedding cake, poppyseed cake, in particular. So I did. I made a four-tiered creation, the top layer being a cake made in the pig head mold. Quite amusing, and a big hit!

I can't imagine making head cheese, let alone eating it. Nope. Especially if you could make a poppyseed cake and eat that.