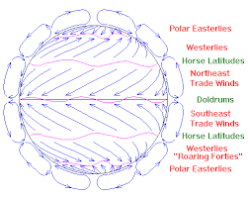 Open Ocean, directed by Nathan Siegel, follows Barcelona firefighter Didac Costa as he attempts the world’s toughest sailing race: the Vendée Globe, a solo, nonstop, unassisted sailing race around the world that takes about 100 days. Unlike many of his competitors (there are 30 boats in all), Costa lacks sponsors and money, and the challenges he faces—from DIY sailboat prep to a pre-race lightning strike that fries the boat’s electronics to, of course, Covid—would keep most of us permanently on terra firma. Costa, however, persists and—spoiler alert—eventually prevails.

As he crosses the Equator (twice), Costa passes through the becalmed zone known as the Doldrums. In fact, even though he speaks a mixture of Spanish and Catalan throughout the film, he uses the English word for the area: Los Doldrums.*

English has many words and phrases that migrated from nautical to general usage: on board, groggy, give a wide berth, flotsam and jetsam, pipe down, loose cannon. (More here.) But doldrums isn’t one of them—its linguistic pilgrimage traveled in the opposite direction.

According to the OED, the first appearance in print of doldrums was in 1811, in the London Morning Herald. (The Online Etymology Dictionary provides a different citation from 1803.) It originally had no maritime associations; it meant—as it can still mean—“low spirits” or “depression.” (Full citation: “I am now in the doldrums; but when I get better, I will send you [etc.].”) A year later, the singular form appeared, also in a British publication, where it meant “a dull person”: “A doldrum is, we believe, the cant word for a long sleeper.” It’s likely that this doldrum had been circulating for a while. The dold- part is an obsolete adjective from the 15th century meaning “stupid” or “inert”; it may be related to dull. The -um part may be mock-Latin or an imitation of tantrum, a word that had been invented in the early 18th century.

It seems to have taken about ten years for doldrums to acquire a generic nautical sense of “any calm water unfit for sailing.” By 1848, according to the Online Etymology Dictionary, the term was being applied specifically to the area around the Equator. (“Apparently due to a misunderstanding of the phrase ‘in the doldrums’, the state being taken as a locality” – OED.)

Sailing is an ancient and global activity, so I would have assumed that different languages had different words for “the Doldrums.” I don’t know whether all Spanish sailors use the English term or whether it’s just Didac Costa’s preference. Maybe one of my polyglot readers will answer my semaphore signal.

I hope Open Ocean finds a distributor. In the meantime, you can read an interview with director Nathan Siegel and view the film’s trailer below. And if you feel like spending $140 (worth it IMO), you can watch all of this year’s IOFF films, including Open Ocean, in the virtual (streaming) festival, April 11 through 24. In case you missed it, here’s my story for EatDrinkFilms about the IOFF.

* Open Ocean wasn’t the only film at the festival with an interesting language angle. I also saw Twist mo Spin, a filmed version of a stage play that toured the South Pacific archipelago of Vanuatu in 2019. In the film, the actors speak Bislama, an English-based pidgin that also borrows from Spanish, French, and other languages. Bislama is a lingua franca in several South Pacific countries and the official language of Vanuatu; the “Bislama” name is an adaptation from biche de mer, French for “sea cucumber”—a creature that, perhaps not coincidentally, figures significantly in the plot.