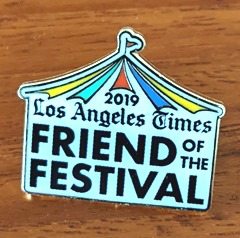 Some linguistic background first. The -chella in #Bookchella operates as a “libfix” (liberated affix), as the linguist Arnold Zwicky dubbed such word parts, which are also known as productive bound morphemes. Tack -chella onto the end of another word and you communicate “festival.” For decades now, -stock, clipped from Woodstock, has played a similar role. (Read my 2013 article about “X-stock.”) Other well-known libfixes include -gate for any scandal and -preneur for any independent businessperson. (More libfixes here; read my 2014 article about -preneur compounds here.)

The Coachella Valley Music and Arts Festival was first held in Indio, California, in October 1999, three months after Woodstock ’99 attempted to revive the 30-year-old spirit of the legendary gathering in upstate New York. The California festival took a break in 2000 and returned annually beginning in 2001, gradually growing from a single weekend to two consecutive weekends; in 2017, 250,000 people attended. Like the Times book festival and pretty much everything else, Coachella wasn’t held in 2020 or 2021.

The music festival has registered a handful of trademarks (including for NFTs and cryptocurrency), and lately the music festival’s lawyers have been busy suing other portmanteau’d -chella entities for infringement. Back in 2018, the festival’s owner, Goldenvoice, blocked Sean Combs’s planned Combschella and Whole Foods’s Wholechella, which were unrelated to each other and to the Coachella festival.

In September 2021 Goldenvoice sued the organizers of Carchella, a touring exotic-car showcase with musical acts; Carchella’s organizer agreed in October 2021 to stop using the name. And in January 2022, Goldenvoice attempted to block the trademark registration of a different Bookchella—a children’s book festival unrelated to the L.A. Times event.

But wait! you protest. Isn’t “-chella” distinct from “Coachella” and thus ownable by anyone? Yes and no, writes Eric Perrott, a trademark attorney with Gerben Law Firm, which has offices throughout the East Coast of the U.S.:

[J]ust because another individual or organization wants to use the suffix ‘chella’ or even ‘Coachella’ for their product or service does not mean they will be hearing from Goldenvoice attorneys. In order for there to be a legitimate claim that infringement has occurred, there has to be concern that the goods and/or services would cause confusion among consumers. This confusion could lead to an assumption that the goods/services are associated with each other. This is why owners of other U.S. trademark registrations that use the word ‘Coachella’ in their mark may not be concerned about litigation from Goldenvoice.

So, yes, there are plenty of registered “Coachella” trademarks for things like coffee, vodka, hard seltzer, and “Nature’s Anthem Finest Dates from Coachella Valley.” (California grows 90 percent of all dates in the United States, and most of them come from the Coachella Valley.) As long as music and art—or, I guess, books?—aren’t involved, you can ® that ™.

I can’t let this subject go without some comments about “Coachella” itself, a fascinating curiosity among place names.

I grew up in Los Angeles, and my family occasionally visited the Coachella Valley over spring break. This was long before anyone dreamed of a music festival in that arid area; the most exciting thing we did was go to Shields Date Garden for date shakes and a ritual viewing of “The Romance and Sex Life of the Date,” a grainy, G-rated film that has played pretty much continuously since 1951. (You can watch it on YouTube now, of course.)

Back then, everyone I knew pronounced Coachella with four syllables: Co-a-chel-la. At some point in the last decade or so, though, I began hearing a three-syllable pronunciation: Co-chell-a. I was sure the three-syllable contingent was sadly misinformed, but it turns out we’re both right—or as right as anyone can be with this weird name.

Since shells could be found in the valley—obviously remnants of the time when the region of Riverside and Imperial Cos. was under water—Dr. Stephen Bowers called it Conchilla Valley in a lecture before the Ventura Society of Natural History in 1888, after Spanish conchilla ‘shell’… and when the region was surveyed by the USGS before 1900, A.G. Tingman, a storekeeper in Indio, proposed the change of the name to Conchilla Valley. This name was accepted by the prospectors and homesteaders, and apparently also by W.C. Mendenhall of the USGS. At any rate, he used the name Conchilla as late as 1909… But the cartographers apparently misread the name, and it appeared as Coachella Valley on the San Jacinto atlas sheet—a “bastard name without meaning in any language,” as Mr. Tingman is reported to have remarked. But other inhabitants of the valley considered the name “unique, distinctive and euphonious,” and in 1909 the BGN made the name official.

“Which explains,” wrote LanguageHat in a 2004 blog post, “why it’s not pronounced with the Spanish /y/ for ll: it’s not Spanish, it’s Bastard.” And yet another place name attributable to error.

Gudde gives both the three- and the four-syllable phonetic guide for the bastard name, so it’s likely that both pronunciations were already current more than 70 years ago. If I had to guess, I’d say the four-syllable pronunciation was influenced locally by the presence of Coalinga, a city in Fresno County whose name—as legend has it—came from the railroad’s “Coaling Station A” and which is always pronounced Co-a-ling-a. And yes, we’ve heard the smutty jokes.

Fascinating. Thanks for the history of "Coachella" and the summary of the legal situation. I think I need to add this blog to my small list; I'm here thanks to Arnold Zwicky's reference to it.

JBL: Thanks and welcome!