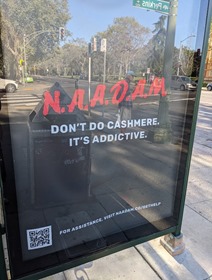 The ad looks to be a parody of the very real, very serious addiction nonprofit D.A.R.E., which was founded in 1983 and whose name really is an acronym: the initials stand for “Drug Abuse Resistance Education.” 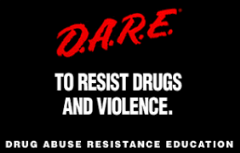 Even the red typeface is similar.

But Naadam or NAADAM or N.A.A.D.A.M. isn’t a nonprofit: It’s a manufacturer and seller of Mongolian cashmere apparel and accessories. And Naadam isn’t an acronym: It’s a Mongolian word, pronounced NODD-um, that means “games.” Naadam is also the name of a midsummer festival celebrated throughout Mongolia.

I had to look this up, because, interesting and relevant as it is, the story doesn’t appear nowhere on the Naadam website. Nor is there a pronunciation guide.

Instead, we have these cryptic ads for a luxury product on—let’s be candid—a depressingly downscale street.

I took the first photo on the corner of Grand Avenue and Perkins Street, around the corner from where I live and directly in front of a Chevron station. It’s a bus stop I use frequently, usually keeping a respectful distance from whichever houseless chap is sleeping or ranting on the bench, surrounded by a midden of fast-food wrappers. Yes, it’s that kind of neighborhood. The kind of neighborhood where most of the bus-stop advertising is from earnest nonprofits offering free tax advice or confidential STD screening or a human-trafficking hotline. Or, you know, actual addiction services. 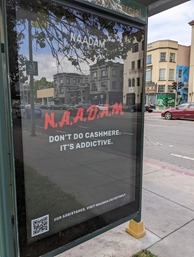 Here’s another Naadam ad, taken on the same day at Grand Avenue and El Embarcadero, in front of the Lakeview Branch library, less than half a mile from the first ad.

Naadam was founded in 2013 by two college friends who, on a trip to Mongolia’s Gobi Desert, landed on the idea of a middleman-free cashmere business in which they dealt directly with goatherders, spinners, and manufacturers and passed the savings along to consumers. Sustainable and ethical appear frequently on the website. So the outdoor ad campaign is a mystery on several levels: It doesn’t boost name recognition or provide a pronunciation aid, it doesn’t promote the company’s strengths, it looks creepily like a drug-abuse ad (in an area full of actual drug-abuse ads), and it’s negative. And although advertising benefits from repetition, four of these ads within one mile feels like bludgeoning rather than reinforcing.

And lest we forget: Whoever bought the space completely misunderstood the local demographic, which is more scavenging-through-the-free-box than I-need-that-$175-cashmere-hoodie-in-all-eleven-colors. 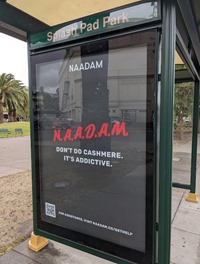 This ad is on Grand and Lake Park, a few blocks from the previous one. Directly across the street I saw two houseless fellows sleeping under the marquee of the Grand Lake Theater.

The QR code on the ad takes you to a web page headed Get Help, which links to a page where you can buy a $25 Don’t Do Cashmere T-shirt. (Fiber content not specified; presumably not cashmere.) Net proceeds go to Shatterproof, an addiction-treatment program. With a $200 purchase, the tee is free. (Use code DARE. Seriously.) 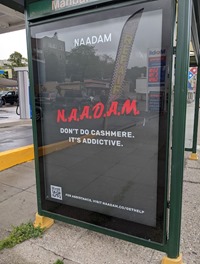 It’s true that sometimes negative messages can have a positive effect, if only to startle and capture attention. But this negative message, targeted at the wrong demographic, only confuses. Worse, from a trademark and branding perspective, the ad dilutes the company name by twisting it into something it isn’t: an acronym.

For a more positive take on Naadam, watch this nicely produced corporate video.

Posted at 06:10 AM in Acronyms, Advertising, Naming, Oakland, They Said WHAT???, Transportation | Permalink

Well, those ads definitely convinced me: I won't be doing cashmere. Or, certainly not Naadam's cashmere.

Thanks (?) for bringing this to our attention because now it is EVERYWHERE! Passed a northbound city bus with its huge ad on the way to the Golden Gate Bridge today. I, however, am not in danger of getting addicted to cashmere no matter how ethically sourced.