On the Visual Thesaurus: Street names

William Penn, founder of Pennsylvania, introduced the numbered street grid and the custom of naming streets after “things that Spontaneously Grow in the Country.” (Which explains why there are so many Chestnut Streets in the U.S.) San Francisco has eleven sets of alphabetically named streets (Anza, Balboa, Cabrillo…). Following the Russian invasion of Ukraine in late February 2022, cities around the world renamed streets to honor Ukrainian independence—and not just any streets, but the ones on which Russian embassies are situated.

For my April Visual Thesaurus column, “Street Smarts,” I take a tour of street-name lore like this, with a tip of the hat to Deirdre Mask’s fascinating The Address Book: What Street Addresses Reveal About Identity, Race, Wealth, and Power. Full access is paywalled for three months; here’s a sample:

“Modern street names do more than describe; they commemorate,” Mask observes. Mexico has more than 500 streets named for the peasant-revolution leader Emiliano Zapata; the capital has a major thoroughfare named 16 de septiembre, the date marking Mexico’s independence from Spain. After Martin Luther King Jr. was assassinated in 1968, it took the Dutch city of Haarlem only a week to name a street after him. (It took MLK’s birthplace, Atlanta, eight years.) Today nearly 900 streets are named for King in the U.S.; still more can be found as far away as France, South Africa, and Israel. 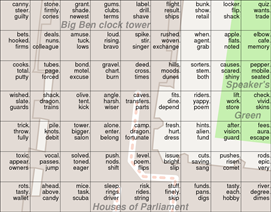 What3Words, founded in 2013 and based in London, offers an alternative to street addresses: three-word strings that identify every three-meter-square patch of earth and water on the globe. It has spawned many cheeky clones, including What3F*cks.

Blog bonus #1: The study street names is odonymy, from the Greek hodos (road) and onoma (name). The hodos element also shows up in exodus (“a path out”) and odometer (an instrument for measuring the distance traveled by a wheeled vehicle).

Blog bonus #2: Here’s a word I learned from The Address Book: cadastre. (Rhymes with “disaster”; adjective is cadastral.) A cadastre is “an official register of the quantity, value, and ownership of real estate used in apportioning taxes” (Merriam-Webster); the word was imported from French, which adapted it from Italian catastro. The ultimate source is Late Greek katastichon: notebook, from Greek kata by + stichos row, line.

Posted at 06:00 AM in Naming, Place Names, Visual Thesaurus | Permalink