« In the news: Metamates and Amazonification | Main | Name in the news: Bellingcat »

You’ve probably deduced that prebunking is related to debunking: exposing the falsity of a claim. In a January 2019 Wall Street Journal column, Ben Zimmer traced “debunk” (or “de-bunk”) to a 1915 article in the New York Sun; the word owes its popularity to a 1923 novel by William Woodward titled, simply, Bunk. The novel’s protagonist declares that “De-bunking is simply an intellectual deflation. It’s the science of reality.” As an Americanism meaning “nonsense,” bunk goes back to 1830; it’s a clipping of Buncombe, the name of a North Carolina county whose Congressional representative was known for “pointless oratory,” as Ben Zimmer puts it.*

I haven’t been able to find a dictionary definition of prebunk or prebunking other than a January 8, 2019, Urban Dictionary entry that seems pretty accurate:

Verb - to debunk lies you know are coming in advance.

The fact checkers were able to prebunk most of the lies they knew Trump would tell before the speech even started.

An article titled “What Is Prebunking?” published in Psychology Today in August 2021 calls prebunking “a decade-old idea that has just been bolstered by a rash of newly published research papers.” At the time of that article’s publication, prebunking was being invoked in the context of Covid vaccine misinformation; see, for example, a June 2021 PBS story, “How ‘Prebunking’ Can Fight Fast-Moving Vaccine Lies.” (“Rather than chasing lies and trying to persuade people who have already been convinced by them, researchers and public health officials are exploring ways to get ahead of those lies through a social psychology tool called prebunking.”)

Also in June 2021, the news and analysis site First Draft published “A Guide to Prebunking: A Promising Way to Inoculate Against Misinformation.” 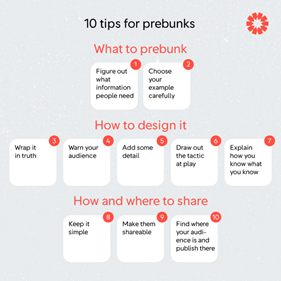 “Debunks don’t reach as many people as misinformation, and they don’t spread nearly as quickly,” the First Draft article explains. “If they do reach us, they generally struggle to erase the misinformation from our debates or our brains. Even when we’ve been told that the misinformation is false, research suggests it continues to influence our thinking. So it helps to take a page from medicine: Prevention, not cure, may be a more effective way to combat misinformation.”

1) Pre-Bunking
In the past, Russia was essentially pushing against an open door.
This time, a network style coalition got ahead of it and preempted and pre-bunked the Russian goal of justifying a long planned invasion as an emergency response.

One of the commenters on Ben Zimmer’s WSJ “debunk” column wondered whether  “after something has been de-bunked, whether it can be re-bunked ... a sort of ‘round trip.’” It can! The OED’s entry for rebunk defines the verb as “To reaffirm the truth or credence of (a statement, idea, etc., which has been debunked). Also: to restore the reputation of or regard for (a person who has been debunked).” The word first appeared in The ABC of War Debts, published by Frank H. Simonds in 1933. “What ... is the practical use of trying to debunk the public about payments in money,” wrote Simonds, “only to rebunk them about payment in trade?”

In war, if not in love, it seems that bunk in some form will always be with us.

* The other bunk—a bed or sleeping berth—first appeared in England in the mid-18th century. It may be related to bank, in its sense of “bench”; or to a Scandinavian word meaning “boarding to protect a ship from the weather.”)

Posted at 06:13 AM in Coronavirus, Current Affairs, Media, Politics, Russian, Word of the Week | Permalink