Look closely at “Bellingcat,” and you’ll probably recognize one of Aesop’s Fables. The mice hold a meeting to discuss their enemy, the cat. If only there were a way to know when the cat was approaching so they could beat a retreat! A bell around the cat’s neck: that’s the ticket. The mice congratulate each other on their brilliance. Finally an elder mouse speaks up: Who among you, he asks, is brave enough to bell the cat?

We are, say Higgins and his fellow Bellingcat researchers.

And let’s have a moment of admiring silence for the simple and elegant Bellingcat wordmark, which is set in a typewriter-like font and which replaces the “i” with an upside-down (or Spanish) question mark, perhaps to signify that Bellingcat asks questions from a different angle.

Eliot Higgins appears to have a flair for naming. Before he founded Bellingcat, he was a prolific blogger whose nom de blog was “Brown Moses,” a moniker borrowed from the title of a Frank Zappa song. “He selected his pseudonym more than a decade ago, essentially at random,” wrote Patrick Radden Keefe in a 2013 New Yorker profile of Higgins, “when a discussion forum requested a handle while he was listening to the Frank Zappa song ‘Brown Moses.’”

Moral: Names can come from all kinds of sources. Open your ears.

Here’s one version of the fable on which the Bellingcat name is based. It’s from Milo Winter’s Aesop for Children, a beautifully illustrated book I owned as a child and which I was positive I still had on one of my shelves, but haven’t been able to find. Many thanks to the Fables of Aesop website, which also has other versions of the tale. 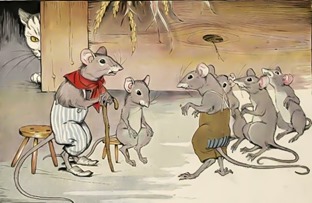 Illustration by Milo Winter (1919) via Fables of Aesop

“The Mice once called a meeting to decide on a plan to free themselves of their enemy, the Cat. At least they wished to find some way of knowing when she was coming, so they might have time to run away. Indeed, something had to be done, for they lived in such constant fear of her claws that they hardly dared stir from their dens by night or day.

“Many plans were discussed, but none of them was thought good enough. At last a very young Mouse got up and said:

“‘I have a plan that seems very simple, but I know it will be successful. All we have to do is to hang a bell about the Cat’s neck. When we hear the bell ringing we will know immediately that our enemy is coming.’

“All the Mice were much surprised that they had not thought of such a plan before. But in the midst of the rejoicing over their good fortune, an old Mouse arose and said:

“‘I will say that the plan of the young Mouse is very good. But let me ask one question: Who will bell the Cat?’”

It is one thing to say that something should be done, but quite a different matter to do it.

* The peacetime equivalent of this fable is the story of the Little Red Hen: No one wants to help with the baking but everyone wants to enjoy the bread.

Posted at 06:09 AM in Current Affairs, How They Got That Name, Names in the News, Naming, Nicely Named | Permalink