« New writing: Chaplin's "City Lights" as you were meant to hear it | Main | The Carpetbagger vs. The Projectionist »

I just saw the word "sewershed" and couldn't parse it. I kept seeing "wershed" like one chunk (like "washed"). So... I guess it's pronounced "suh-wersht?" Does it have a Germanic root?

No, dummy. It's SEWER SHED. Like a watershed, but for wastewater.

In fact, though, sewershed is not a new word: It’s been in circulation for more than 50 years, although I wasn’t able to find it in any general-use dictionary. It’s formed from sewer + shed, in imitation of watershed, a word that entered English in the mid-18th century. Watershed meant “the line separating the waters flowing into different rivers or river basins,” but in the 19th century it acquired a chiefly North American sense: “a catchment area or drainage basin.” That’s the sense that sewershed mirrors: “the area of land where all the sewers flow to a single end point,” as an undated PDF from the Pittsburgh Water & Sewer Authority puts it. Alternatively, in a 2017 publication, the Gowanus Canal Conservancy, in Brooklyn, defined sewershed as “an area that is serviced by a wastewater treatment plant.” 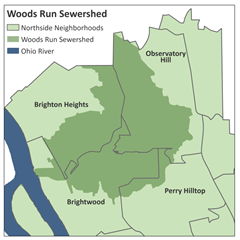 We never really see water flow in the city except for rain running down the street and into a drain- not exactly natural. Like it or not, we live in a totally engineered world here in NYC.  That being so, the concept of “watershed“ we learned in high school doesn’t necessarily apply to the way water flows here. This is why I think the term “sewershed” is more appropriate for urban areas, especially those with combined storm and sewer systems like we have here in NYC.

A Google Ngram search turned up many citations for sewershed, mostly in specialized engineering publications, from as early as 1966. (One result was dated 1927, but the date appears to be a scanning error.)

Sewer has an Old English-y sound, but in fact it came into English around 1400 from Latin via French. (It was the Romans, after all, who were the masters of both waterflow and wastewaterflow.) The Latin form, exaquaria, meant “something that makes water flow.” Around 1600, sewer began to mean specifically “underground channels for wastewater.” (It’s not to be confused with sewer, with a different vowel sound, meaning “a person who sews.” English is hard.) The shed part of sewershed actually is from Old English. The verb meant then what it means today: to cast off, to part with. Its distant relatives include a lot of words with “separating” meanings, including shingle, scissors, and, yes, shit, which brings us right back to sewer. (See this 2019 post by Jonathon Owen for more on the subject.)

Sewershed isn’t the only spinoff of watershed. A few years ago I took a photo of a “milkshed” map displayed by local cheesemakers Cowgirl Creamery (R.I.P.). A milkshed is a region producing milk that may be supplied to the area of demand without spoiling; the word goes back to 1925 or so.

Of course, a milkshed can also be a small building—this shed’s etymology is unrelated to the shed in sewershed—in which animals are milked. Have I mentioned that English is hard?

Posted at 06:13 AM in Coronavirus, Environment, Neologisms, Science, Word of the Week | Permalink

Ha! I read the first few lines and saw 'coronavirus' and 'wastewater' and thought 'sewershed' was going to be about coronavirus fragments (or other components of interest) 'shed' into a 'sewer', where they are detected via analysis of wastewater.