« The Carpetbagger vs. The Projectionist | Main | Are Americans ready for knickers? »

The OED says gringo is, “among Spanish-Americans, a contemptuous name for an Englishman or an Anglo-American” and says it comes

The OED’s earliest citation is from an 1849 book by John Woodhouse Audubon, the son of the famous ornithologist: “We were hooted and shouted at as we passed through, and called ‘Gringoes’.” H.L. Mencken, in The American Language (1951 revised edition), says it’s probably older. The Dictionary of the American West calls it “a derogatory word” and dismisses “folk etymologies” that trace it to “greens go home” (from the color of American uniforms in the Mexican-American War, 1846–1848) and “Green Grow the Lilacs” (a song popular during that war).

But gringo has never been too derogatory to be willingly appropriated by its targets. Arellano writes that gringos “have used ‘gringo’ to refer to themselves almost as soon as they learned what the word meant.” The L.A. Times itself used the term in 1882 “to mock the losing side in the Mexican-American War.” 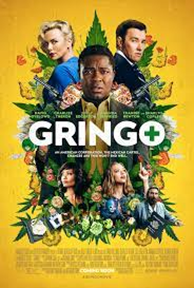 Gringo (2018), “a dark comedy mixed with white-knuckle action and dramatic intrigue, explores the battle of survival for businessman Harold Soyinka (David Oyelowo) when he finds himself crossing the line from law-abiding citizen to wanted criminal.” Co-starring Amanda Seyfried and Charlize Theron.

One indicator of gringo’s mainstream acceptance is the 79 live trademarks that include the word, having successfully surmounted the trademark board’s bar for offensive or scandalous language. Some of the trademark filings include “translations.” 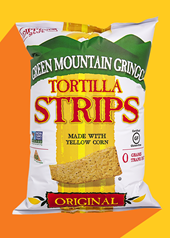 All-Natural Green Mountain Gringo Tortilla Strips (based in North Carolina): “The English translation of ‘Gringo’ is ‘American or Englishman’.” 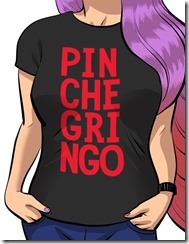 You can even advertise your gringo pride  with a PINCHE GRINGO T-shirt. The trademark registration for this item translates pinche as “lousy,” but that’s a bit demure. According to Dictionary.com, “in many Spanish dialects, pinche is a strong swear word variously meaning ‘goddamned,’ ‘shitty,’ or ‘fucking,’ among other senses.” It’s also a noun meaning “low-level kitchen worker” or “scullion.”

The bottom line: context matters, and if you have a generous spirit you can interpret “You’re such a gringo” almost as a term of endearment between old friends. Maybe Mr. McCann would be happier if he increased his tolerance for all kinds of sauce—including slightly saucy language.

Posted at 06:11 AM in Slang, Spanish, Trademark, Word of the Week | Permalink