Last week it was knickers, which I’d spotted, in clipped and diminutive forms, in two corporate names, Knix and Knickey. Yesterday’s mail (perhaps I should now be saying post?) brought an oversize card whose solicitation includes two more Britishisms: bum and loo. 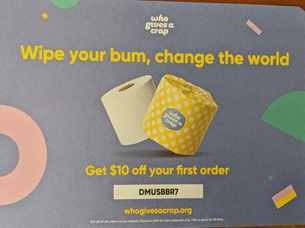 “Wipe your bum, change the world.” At least they don’t say “Changing the world, one bum at a time.” 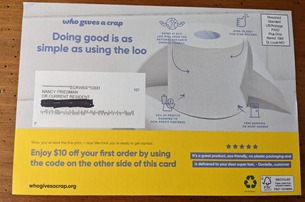 “Doing good is as simple as using the loo.”

The card had been sent by a company called Who Gives a Crap, which sells “forest-friendly” toilet paper and facial tissues. (Yes, it’s another sassy-feces brand, like Poo-Pourri toilet spritz and Tushy, the bidet attachment “for people who poop.”) But although WGaC is making inroads in the U.S., the company was founded in 2012 in Melbourne, Australia, and is still headquartered there. So they come by their bum and loo naturally enough. And now they’re trying to export them along with their bamboo TP (made in China, where the bamboo grows) and bamboo/sugarcane paper towels.

WGaC has a good story and a noble purpose, which it signals with its nonprofity-y dot-org domain extension. Here’s some of the story:

We started Who Gives A Crap when we learnt that 2.4 billion people don’t have access to a toilet (now 2 billion – yay for progress!). That’s roughly 40% of the global population and means that around 289,000 children under five die every year from diarrheal diseases caused by poor water and sanitation. That’s almost 800 children per day, or one child every two minutes.

We thought that was pretty crap. So in July 2012, Simon, Jehan and Danny launched Who Gives A Crap with a crowdfunding campaign on IndieGoGo. Simon sat on a toilet in our draughty warehouse and refused to move until we had raised enough pre-orders to start production. 50 hours and one cold bottom later, we’d raised over $50,000 (see the video here!)

I’ll grant them that bum and loo are fun to say—cheeky, even. Maybe they’ll catch on over here. But I wouldn’t bet on “draughty” (drafty) or “learnt” (learned) winning hearts, minds, and U.S. dictionaries. I was, however, interested to see that WGaC uses the American and Canadian spelling of “diarrheal” instead of British “diarrhoeal.” I could say something about a vowel movement, but I’ll refrain.

* In other Britishisms news, read Ben Yagoda’s recent post on pawky, which appeared in a New York Times book review written by an American, Dwight Garner.

Posted at 06:00 AM in Advertising, Australian, British | Permalink

Grouch Marx wrote about visiting England and being introduced to their vernacular. He said something to the effect of: "It gave a whole new meaning to The Battle of Waterloo."

Canadian here, curious about bum! What do Americans say instead?

Janelle: Butt or ass, usually. With children one night say "behind" or "seat."

I'm rarely comfortable with 'pre-orders' and similar words. 'Orders' seems to be sufficient.

Also, is there a name for the type of humour you've displayed in your last line – introducing a topic without developing it? I admit to using the technique myself, at times. Searching the internet for a name is hard because I can't think of suitable search terms.