On the Visual Thesaurus: Talkin' Vegan

The “plant-based food industry,” which makes alternatives to meat and dairy products, is thriving and growing: The U.S. market was valued at $7 billion in 2021, and is expected to grow another 50 percent by 2027. That means lots of competition for product names as well as for shelf space. How can brands tell customers what their products are—and, more to the point, aren’t?

That’s the subject of “The Vegan Versions,” my February column for the Visual Thesaurus. As usual, the column is paywalled for three months. (Please subscribe!) Here’s a free and animal-free taste of one branding strategy:

Go abstract. One of the most conspicuous new trends in plant-based-food naming, especially among companies founded in the last decade, rejects negatives and similes in favor of high-concept abstract words: Impossible, Beyond, Daring, Just. These brand names say “We’re not fake anything—we’re real change.” These brand stories often emphasize not merely taste and texture but health and environmental well-being. Impossible Foods, whose burgers are sold in supermarkets and fast-food chains and which has branched out into plant-based chicken and pork alternatives, declares on its home page, “You deserve better. You deserve Impossible.” Beyond Meat, founded in 2009, challenges us to “Take your health beyond.” In January, Daring Foods, founded in 2017, took out a four-page ad supplement in the New York Times to trumpet that it’s “making chicken better by making it out of plants.” (On its website, Daring calls its product “the plant chicken for people who love the taste of chicken chicken.”) And JUST Egg (2011), which makes “plant-based alternatives to conventionally produced egg products,” pulls off a double meaning with “JUST,” which can signify both “solely” and “righteous.”

Read “Phood for Thought,” my 2011 column on unconventionally spelled foodstuffs, from Cheez-It to Wyngz.

Read “It’s Not Fake Anything,” my 2019 column about vegan branding in which I experimented with a different taxonomy.

Kim Severson wrote for the New York Times about visiting Upside Foods in Emeryville, California, and sampling two forms of “cultivated meat,” a “slightly grainy chicken pâté and a perfectly round breakfast patty blended with plant-based proteins that fried up nicely.” She had something to say about nomenclature, too:

What to call meat grown in tanks remains a battle. The United States Cattlemen’s Association petitioned the Department of Agriculture in 2018 to limit the definition of meat and beef to products derived from animals born, raised and harvested in the traditional manner. The request was denied. States have jumped in. In Georgia, cell-cultured products have to be labeled “lab-grown,” “lab-created” or “grown in a lab.”

Most producers prefer the term cultivated meat, or cultured meat. The terms slaughter-free meat or clean meat are favored by some in the animal-rights contingent. Cooks, ranchers and others who oppose it call it synthetic, fake or engineered meat. The debate is likely to be settled, at least legally, when the agriculture department decides what to require on the label.

A few photos that didn’t make the cut: 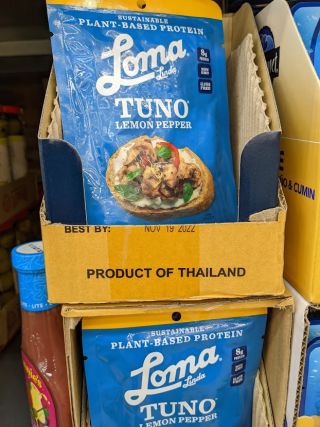 Frozen cauliflower linguine from Caulipower. “They said it was impastable.” Spotted at Safeway, Oakland.

“Milked oats” (chocolate flavor) from Elmhurst, the Elma, New York, “dairy that gave up dairy”; and Milkadamia, made in Australia from macadamia nuts and “full of art, balance, care, and flair.”

And from Neal Whitman: