Word of the week: Blue lie

At its annual meeting last week, the American Dialect Society selected insurrection as its word of the year for 2021. I’d originally picked insurrection myself, but switched to Big Lie, which, I argued, was the insurrection’s impetus and underpinning. Big Lie did make the ADS’s shortlist, though. And this week I’m looking at another shade of mendacity—one that was new to me until very recently: blue lie.

I came across blue lie in a New Yorker article by Evan Osnos about a hugely popular and scarily influential right-wing radio host: “Dan Bongino and the Big Business of Returning Trump to Power,” published in the magazine’s January 3 & 10 issue. Here’s the relevant passage:

Bongino, like other prominent supporters, seems to put increasing stock in what researchers refer to as “blue lies,” the kinds of claims that pull believers together and drive skeptics away. (“There were known issues with the election,” he said in December, adding, “We get that.”)

Here’s the Wikipedia definition*: “a form of lying that is told purportedly to benefit a collective or ‘in the name of the collective good’. The origin of the term ‘blue lie’ is possibly from cases where police officers made false statements to protect the police force or to ensure the success of a legal case against an accused.” Blue, the color of police uniforms, is a stand-in—a metonym—for “police.” 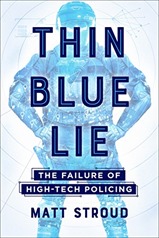 Thin Blue Lie: The Failure of High-Tech Policing, by Matt Stroud (2019). The title puns on “thin blue line,” the concept that the police keep society from descending into violent chaos. Popularized by the Los Angeles Police Department in the 1950s, “thin blue line” was itself a variation on “The Thin Red Line,” a British regiment during the Crimean War. The Thin Blue Line is the title of a 1988 documentary by Errol Morris about the murder of a Texas police officer. The thin blue line flag has been displayed as a show of support for law enforcement “but also has come to signal opposition to the racial-justice movement.”

Whenever we talk about lies, big or small, blue or red-white-and-blue, there’s inevitably a Trump connection. In March 2017, Jeremy Adam Smith wrote for ScientificAmerican.com about “how the science of blue lies may explain Trump’s support”:

Journalists and researchers have suggested many answers, from a hyperbiased, segmented media to simple ignorance on the part of GOP voters. But there is another explanation that no one seems to have entertained. It is that Trump is telling “blue lies”—a psychologist’s term for falsehoods, told on behalf of a group, that can actually strengthen bonds among the members of that group.

Children start to tell selfish lies at about age three, when they discover adults cannot read their minds: I didn’t steal that toy. Daddy said I could. He hit me first. At around age seven, they begin to tell white lies motivated by feelings of empathy and compassion: That’s a good drawing. I love socks for Christmas. You’re funny.

Blue lies are a different category altogether, simultaneously selfish and beneficial to others—but only to those who belong to your group. As University of Toronto psychologist Kang Lee explains, blue lies fall in between generous white lies and selfish “black” ones. “You can tell a blue lie against another group,” he says, which makes it simultaneously selfless and self-serving. “For example, you can lie about your team’s cheating in a game, which is antisocial but helps your team.”

It is in blue lies that the best and worst in humanity can come together. They reveal our loyalty, our ability to cooperate, and our capacity to care about the people around us and to trust them. At the same time, blue lies display our predisposition to hate and dehumanize outsiders and our tendency to delude ourselves.

For what it’s worth, Urban Dictionary has a March 2020 entry for pink lie: “a lie a male tells a female in order to better their chances of sleeping with them.” I’m willing to bet you can find a Trump connection there, too.