On the Visual Thesaurus: The -core corps

My latest column for the Visual Thesaurus looks at the increasingly common -core suffix, which has evolved from descriptions of music and pornography to what’s being termed “aesthetics”: personal style choices, from adventurecore to zombiecore.

Full access to the column is paywalled for three months; here’s a sample.

It was music that pushed -core into new directions. In their “Among the New Words” column in the Summer 2012 issue of American Speech, Ben Zimmer and Charles Carson traced this evolution back to speedcore, which first appeared in 1985. (It refers to hardcore rock music played aggressively at a fast tempo.) They identified a clutch of other musical -cores, including sad core, noise core, deathcore, and nerdcore. In his March 2012 keynote address at the South by Southwest conference in Austin, Texas, Bruce Springsteen wondered aloud at some of these offshoots: “Huh? I just want to know what Nintendo core is, myself.” (Wikipedia has the answer: “a broadly defined style of rock music that most commonly fuses chiptune and video game music with hardcore punk and/or heavy metal.”) The -core suffix “became a way to assign authenticity to a host of new musical genres from rock to dance music to hip-hop,” wrote Britt Peterson in a 2015 Washingtonian article headlined “-Core Is the Suffix of Our Time.” But, Peterson added, “as we discovered grindcore, thrashcore, skacore, breakcore, raggacore, crunkcore, and so on, ‘-core’ lost its hardness—and, in its ubiquity, became a pop-culture wink.”

Read the rest of the column to learn about the vast -core catalog at Aesthetics Wiki. And more! 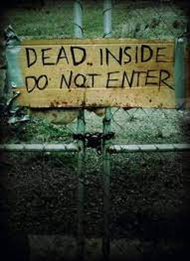 Zombiecore: “an aesthetic based on the feeling, sensation, and visuals of being a zombie or surviving a zombie apocalypse.” Definition and image via Aesthetics Wiki.

Blog bonuses! I’ve written previously about mumblecore (2007), couplecore (2009), lardcore (2010), mid-core (2013), normcore (2014), and cottagecore (2020). And here’s a new one, via the Guardian: dystopia-core, “which is in direct opposition to ‘dopamine dressing’ – wearing overtly fun clothes to help lift your mood – can be seen as the next step of the grunge and goth revivals.” When the New York Times spotted the proto-trend back in 2018 B.C. (Before Covid), the editors dubbed it “war-core.”

Has -core jumped the shark? At least one person thinks so.

Stop suffixing thinks with -punk and -core, you fucking creepy assed normies with your shitty taste.

Posted at 06:20 AM in Core, Fashion, Visual Thesaurus | Permalink