Word of the week: Balk

I was as surprised as Language Hat (Stephen Dodson) to learn that balk may be acquiring a new meaning that’s pretty much the opposite of the traditional one. (I was not surprised, as he was, that the “l” in balk is silent; I’ve always pronounced the word that way on the very few occasions I’ve used it.)

It turns out there’s a lot about balk that’s interesting. For one thing, it’s spelled baulk in the UK. This was news to me, but not completely surprising, because after all the Brits colorfully and flavorfully insert a u in the center of a lot of words.

The widely accepted definition of the verb to balk is “to hesitate” or “to be unwilling to do something.” You usually balk at something, like a high price or an unreasonable demand. The OED gives a bunch of other senses as well, some of them obsolete: to shun, to pass over, to miss by error or inadvertence. My favorite: “To signify to fishing-boats the direction taken by the shoals of herrings or pilchards, as seen from heights overlooking the sea; done at first by bawling or shouting, subsequently by signals.” Since 1845 or so, balk has also been used in baseball to mean “to make an illegal motion, penalized by an advance of the base runners,” or as a noun signifying the illegal or deceptive motion. 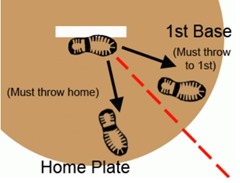 From “What Is a Balk?” on Pro Baseball Insider.

All of those senses except the fishing-boat one come from an Old English word, balca, that meant “a ridge on the land.” Such a ridge was an obstruction, which gave rise to the figurative senses. (The fishing-boat sense comes from a Dutch word, balk-en, that means what its English cognate means: “to bawl.”)

The new sense that Language Hat observed is something like “to cave” or “to give in,” and it’s intransitive. The example he cites is from a July 2021 article in The Atlantic online headlined “Why Managers Fear a Remote Workplace”:

In 2019, Steven Spielberg called for a ban on Oscar eligibility for streaming films, claiming that “movie theaters need to be around forever” and that audiences had to be given “the motion picture theatrical experience” for a movie to be a movie. … Ultimately, Spielberg balked, and last month his company even signed a deal with Netflix.

Here’s one I found, from a December 3 article in Primetimer about the supporting characters in HBO’s “Succession”:

[I]n a telling moment, when asked directly if she was prepared to make a decision that would drastically alter her professional life, Karolina did what most of the characters on Succession do: she balked and chose the comforting familiarity of the devil she knew.

Words change meaning over time, of course. “Silly” used to mean meant “happy”; a “girl” was once a young person of either sex. Could balk be sliding toward a new non-baseball sense? Comments on the Language Hat post suggest that it’s not a completely farfetched idea:

- I have seen and use “balk” to mean “give in” (which I think I pronounce L-fully), and until this post had thought it an unremarkable extension of meaning. To balk is to flinch, and whoever flinches first concedes.

- Could this meaning have arisen from the use of ‘balk’ in baseball? When the pitcher balks, the runners advance and the pitcher has to start over. It’s not exactly the same as giving in but it’s a concession of error.

- “Balked” paints the picture that they and Spielberg have been staring each other down in a battle of wills or metaphorical game of chicken. Spielberg didn’t have what it takes to pull the trigger, or didn’t have the nerve, or feared the imminent clash or its consequences.

- I… I thought that’s what this word meant.

Thinking about balk got me thinking about Balkan, the word used to describe a large region of southeastern Europe. (Or formerly used: the word is discouraged now because of the unsavory sense of Balkanization.) Could balk and Balkan be connected? Probably not, the OED tells us. The geographical term may come from Turkish balkan, which means “a wooded mountain or mountain range (further etymology uncertain.” It does seem interesting that Old English balca and Turkish balkan both refer to topography, but the languages of the world are full of apparent connections that turn out to be fanciful.

Wondering if it is used in pool (billiards)? It is in snooker and billiards in UK and Commonwealth. It is the area of the table furthest away from the pack of reds.

Edward: I've played a little pool--but not snooker or billiards--but never heard "balk" in that context. Wikipedia informs me, though, that "balk" is part of the vocabulary of pool. https://en.wikipedia.org/wiki/Glossary_of_cue_sports_terms#B

This recent additional definition, turns balk into a "Janus word", yieldings two opposing meanings. If my boss sends me into a meeting with a client and advises me "Don't balk at his ideas", what am I to do, resist or accede?

Spielberg will have it two ways as well; he is about to release "West Side Story" for a minimum 45-day theatrical run and then it is expected to stream on Disney+.

On the other hand, this new usage of balk could simply be a mistake on the part of the writer(s). In this age of disintermediation (a fun, relatively new word) where anyone can publish without resort to an editor of any type, I often see writers simply using the wrong word, with no one to tell them the word they should have used.

The billiards usage that I'm familiar with uses "balk line" for the line (also called the "headstring") behind which the cue ball must be placed for a legal "break shot." Snooker--that is, snooker commentators on British TV--refers to the area behind this line as "the balk area" or "balk," as in "leave the ball in balk." And one variety of carom billiards is called "balkline" (usually one word) because the cue ball must cross this line to qualify a shot as permissible.

This stanza from W,H. Auden's poem "Under Which Lyre" presents the reader with two opportunities to choose between unpronounced and pronounced "l", though with a strong bias toward choosing the same for both instances:

If he would leave the self alone,
Apollo's welcome to the throne,
Fasces and falcons;
He loves to rule, has always done it;
The earth would soon, did Hermes run it,
Be like the Balkans.

I don't pronounce the L in balk but I do pronounce it in Balkans - is it typically left out?

Snooker is not played on a snooker table, it is played on an English Billiards table. If you want to know why the lines and dots are where they are, study English Billiards. Originally in Billiards there was no Baulk line, but practitioners became too good at making billiards and so a Baulk line was added. The rules were changed so that after a specified number of direct cannons, the cue ball had to travel into and out of baulk for the break to continue. many/balk