Name in the news: Block

Its best-known brand is Square, the payment app that launched in 2009 and whose fortunes soared during the 2020 pandemic as more retailers began accepting cashless payments. But as of December 10 the parent company—whose holdings also include the streaming-music service Tidal and the mysteriously named open developer platform TBD54566975*—will be known as Block. Like Facebook’s Meta and Google’s Alphabet, this is a corporate name change that will not directly affect consumers. 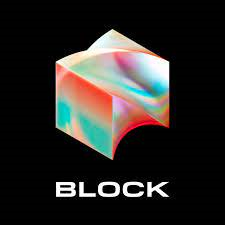 CEO and co-founder Jack Dorsey, 45, a cryptocurrency enthusiast, had stepped down from his role as Twitter CEO on November 29.

Block will keep the ticker symbol SQ; its URL is block.xyz.

Not to get all meta on you… but we’re going to! Block references the neighborhood blocks where we find our sellers, a blockchain, block parties full of music, obstacles to overcome, a section of code, building blocks, and of course, tungsten cubes.

A block is also, of course, a square, or Square, with an extra dimension.

Click through the tweet to read the rest of the thread, which includes this announcement: “Obviously Square Crypto no longer makes sense, so the team is changing its name to Spiral (@spiralbtc). This rebrand reflects their focus on #bitcoin as it continues to grow like a spiral from a single point, encompassing more and more space until it touches everything.”

One familiar type of block isn’t mentioned in the news release: the alphabet block. But I can’t help wondering whether Block’s use of the .xyz domain extension is a wink at the name of Google’s parent company, whose URL is abc.xyz. (Read my post about Alphabet.) 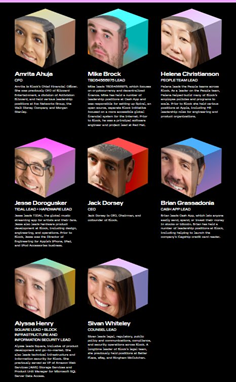 Block’s blocky leadership. Yes, that’s Mike Brock of Block. If you like the look, you can Blockify your own image.

As a name, Block is hardly an original choice: There are currently 2,939 live BLOCK trademarks or trademark applications in the USPTO database, from Adblock Plus to Zenblock. (There’s also a BlockFi, based in New Jersey, that calls itself “the easiest place to buy, sell, and earn cryptocurrency.”) I don’t know anyone at the new Block or any of its subsidiaries, nor do I have the inside scoop on the naming process, so I can’t tell what the naming brief was—or whether there even was one. Sometimes (OK, often), rich and powerful CEOs just hand down decisions and everyone has to live with them. This may be one of those occasions.

Back in 2011 I quoted an interview with Jack Dorsey in which he talked about how his two companies, Twitter and Square, got their names. Square, it turns out, was originally Squirrel—as in “squirreling away money”—but as it happened a rival point-of-sale system was already called Squirrel Systems. (This is why you do competitive research before you get attached to a name.) Dorsey and his team liked the multiple meanings of “square”: the geometric figure, to make something right, to be fair, to start at the beginning (“square one”). They acknowledged and chose to ignore the pejorative sense: old-fashioned, boring.**

Similarly, Block is accentuating its positive meanings and ignoring “mental block,” “blockhead,” and the Twitter command to “block and report.” Remember: You can always find something negative about a new name. The challenge is to identify and emphasize the positive meanings, and to keep emphasizing them until the well-known mere-exposure effect takes hold.

Speaking of exposure, here’s Jenny from the block (but not that Block).

* TBD means “to be determined,” so maybe this is a joke about a placeholder name. I haven’t a clue about what the numerals signify.

** It was only when I looked up this sense of “square” in the Online Etymology Dictionary that I learned its origin: “U.S. jazz slang, said to be from shape of a conductor’s hand gestures in a regular four-beat rhythm. Square-toes meant nearly the same thing late 18c.: "precise, formal, old-fashioned person," from the style of men’s shoes worn early 18c. and then fallen from fashion.”

Posted at 06:00 AM in How They Got That Name, Names in the News, Naming, Technology | Permalink

The first thing I thought of was H&R Block.